Due to the sheer nightmare fuel, the art consists of, I will not be showing any strips from the webcomic, just one sample frame. If for some reason you want to want to experience it for yourself. We'll have links at the end of this review.

As many of you in this wiki know by now, I am a brony. What that means is that I am someone who watches My Little Pony: Friendship is Magic and is of the male gender. The show has been around for six years now; (I first gained an interest in it around the fourth season and officially became a brony before the fifth) and I believe during this time the brony community has grown into one of (if not) the biggest fanbases in modern-day culture.

Unfortunately, for every great person that's in the brony fandom; there's always going to be someone that is either cringe-worthy, obnoxious or makes you question their sanity. This is one of the cases. Today, I will be tackling what has to be one of the weirdest contributions from the brony fandom in the history of anything ever; and let me tell you. It is simply nothing more than a Disaster!

Wait, you mean to tell me there was actually a time when this was good?

DAY ONE, PAGE ONE.

Okay, try not to get cross-eyed from this; but here goes. (deep inhaling of breath)

After a glitch in the portal that takes her into Equestria High; Twilight Sparkle finds herself in the real world (and apparently couldn't have been bothered to have asked for clothes) and tries to find out exactly what's going on and how she even got here. Along the way, she comes across the one and only anonymous green man from 4Chan. Which makes sense, seeing as they have an MLP porn section on their site. After rejecting his advances, a sheriff comes to take her in and 'welcome' her to their lovely neighbourhood...and to give her some clothes...and doesn't even notice that this is a lavender pony transmorphed into a human....... 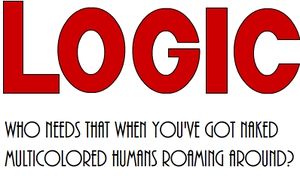 Then Luna gets involved and tries to find Twilight Sparkle and realizes "oh shit, we can't use magic!", which leads me to ask a perfectly good question...

If you could use magic in Equestria Girls, what the hell is stopping you from using it in this world?

So Luna heads off to the animal shelter in the hopes of finding her sister's (Princess Celestia) legendary pupil and protégé, but how can she get in without using magic? Steal some clothes and hope the animal shelter owner doesn't know...She does. And is instantly fascinated by how she is a unicorn. (alicorn) Because of course, she's easily impressed. That or she's taking some really hard drugs and this is all a dream she came up with; or (if you really want to get head-canon-like) the owner is actually Pinkie Pie and this is her master plot to rule Equestria and turn it into Smiletropolis. 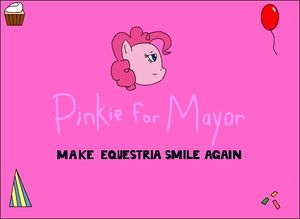 It could happen, right?

Meanwhile, while that's going on, it turns out that this whole mess is happening because Twilight Sparkle is on some sort of mission, never explained. Well, there goes my headcanon...so uh... 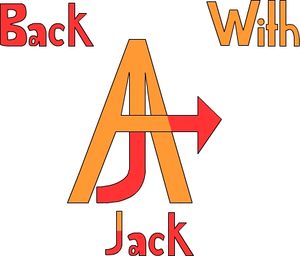 I could keep on going, but at this point, you're probably sitting there thinking to yourself, "What the hell is the shit?" And I would say to you, "It's bat-shit insane fanfiction turned into a webcomic by some bat-shit insane person. It's horrible yes, but at least it isn't like one of those Pooh's Adventures." And then you'd be looking at me thinking I'm retarded and ask me, "Jacob, you're reviewing a webcomic about My Little Pony. What in God's name does Winnie the Pooh have to do with anything?"

And THEN I'd tell you that Pooh's Adventures is a really large, really imaginative, yet really fucked up community that got its infamy by pairing up Winnie the Pooh and his friends with every character under the sun and putting them in various movies for no reason other than because "it's Pooh". Basically, Powerpuff Girls Doujinshi, only not drawn, with much MUCH more in terms of character size and much MUCH worse. Oh, and they shipped Twilight Sparkle with a tank engine. Thomas, the tank engine.

Picture it. A multi-coloured unicorn.

Having relations with a god damn train locomotive.

They're probably makin' babies right now as we speak.

The art is done by 3D software, Poser. The same software infamous webcomic artist 'Ebeneezer Splooge' used to make his 'masterpieces' Pron Queens and more infamously, Pronquest. While the art in this webcomic is not as bad as in Ebeneezer Splooge's...spawns of Satan, it's still pretty bad. 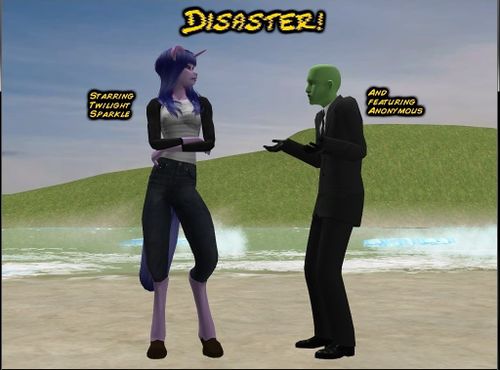 Doesn't look good, does it? It only gets worse.

The faces are very much in the uncanny valley; with cat ears, dog noses and eyes that stare into your soul. They don't look too keen. It doesn't really help that the lightning is very poor, failing to cover important parts and coming across as a cheap effect to make the webcomic seem more professional.

But the biggest complaint I have with the art is that it's very lazy. Like, holy crap is it ever lazy. Guess how many panels the pages have?

You have thirty seconds, good luck.

Ok contestants, time's up. If you can get the correct answer, you will win a vacation to the Bermuda Triangle. So, what was the answer? The correct answer my friends is...

I'm dead serious, he only uses one panel for his webcomic.

Even though you can easily take some of these panels and smash them together. It would certainly help to move the story faster and make it seem a little more tolerable. (Update: He did just that, which I'll give the author props. Whether it was because of us or you just got tired of using only one panel; it's glad to see you taking advice. Granted, the webcomic may still be shit; but it's an improvement)

So, if anyone got the answer right, congratulations! You've won your trip to the Bermuda Triangle, pack your bags, call your friends and family and feel free to write your final vows because you may never be coming back! 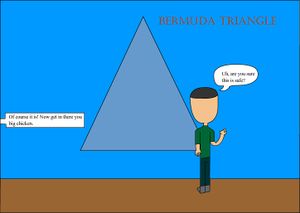 To be honest, the story and characters are actually the most tolerable part of this whole charade. The human characters serve their purpose no matter how bland they are, and for the most part; Twilight Sparkle and Luna aren't written completely out of character. (Despite the whole Luna stealing clothes bit)

The other characters are bland, but at least they play their role and aren't shoe-horned in.

However, there are still two major issues I have. For starters, the dialogue is rather repetitive with the words it uses. Phrases such as "I think" and "First things first" are repeated a lot. You know there are other words in the English language, right? Use them.

The other problem I have, which I feel is much more problematic is that there are a lot of holes in this story.

Let me list them off for you, (and if anyone has an answer to those questions; please say so now that would be great)

Why does the sheriff notice that Twilight and Luna are not humans?

How come they can't use magic in the human world when they can do it in Equestria Girls human world?

What is the mission Twilight Sparkle was sent on?

Why didn't Twilight and Luna just wear the same clothes in Equestria Girls rather than just be naked?

Why exactly is the anon from 4Chan in this? (And no, saying that it promotes the other webcomic he has- Yes he has another, shut up. doesn't count.

That's basically the writing in the nutshell, it's the accidental bastard child of George Lucas (with confusing plot points) and Lawrence Kasanoff (You know, the guy who made Foodfight? That's him.)

Pononimous is the man who made this webcomic. Not much is known about him other than he jacks off to MLP and has another webcomic called Anonymous Gets A Cat, which apparently delves into bestiality. Because there's absolutely nothing wrong with that right? Right?

Can this possibly get any worse?

Well actually, yes it can. Did I say that he has another webcomic?