If I recall, I think I first discovered this comic in the "hot & upcoming" list on SmackJeeves. Truth be told, I was actually looking for bad comics, and figuring that the most popular comics are probably the most terrible, I was looking at that list. I came across this comic, which had 1300 followers at the time, and sure enough, it was terrible right from page one.

This comic is terrible right from the first fucking page. Now, some of you who read this site often might think that a lot of our reviews say shit like, "it was bad from the start" or "it was never good," and me saying its downfall is the very first page is unoriginal. Well, none of those comics start like this one.

The very first page shows a woman getting raped. No wait, that's a guy. Oh, and links NSFW, obviously. 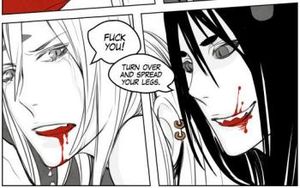 The story starts three thousand years after a great flood destroyed all of human civilization, and Heaven and Hell have been more-or-less at peace with each other since then. Our main character, a demon named Isen, is basically a sex slave to this other demon named Belial who likes to cut him while fucking him in the ass. But it's okay because demons have magical healing powers. While our hero gets raped, this demon lady walks in to remind Belial that he's supposed to inspect the "breeding program". Belial finishes up and sends Isen to go do the inspection for him.

Isen makes his way to some kind of laboratory where some woman who looks exactly like the other woman tells him about this human Belial had brought down from the "mortal world." He tells her to send her back, using the excuse that she's a "mongrel" and they don't want her to taint the pedigree humans by breeding them. However, the look of shock on his face suggests that he feels compassion for the human, and he's just making excuses to free her.

Okay, so right off the bat, we've established that demons rape each other, use humans for food, and Isen isn't like the other demons. However, what I don't get is that Isen has the authority to release a human and override Belial's orders... but he's still subordinate to him? That doesn't make sense.

Anyway, another demon comes in and tells Isen that Satan himself wants to talk to him. Satan tells Isen that he has a task for him, then Isen asks why he picked him when there are more powerful demons he could use. Satan explains that he can't trust any of the other demons because they're not loyal to him. Yes, the Prince of Darkness apparently can't inspire a little loyalty. Anyway, he tells him about a strange human named Christopher Marley that he wants him to watch, but there will also be angels watching Marley who will kill Isen on sight, making it a rather dangerous mission. On top of that, this Marley guy is apparently capable of killing angels, so both God and Satan see him as a threat, and Isen's mission is to find out what he can about him. It's also established that Satan apparently has a son whom he hates so much that he'll repeatedly torture anyone who even mentions him.

Suddenly, out of nowhere, Satan reaches out and starts molesting Isen. He's also doing this while explaining the details of his extremely important mission and expecting Isen to pay attention. Yeah, I know Isen would probably be punished severely if he screws up the mission, but if this is so damn important, then maybe Satan should, you know, not go out of his way to make him fail.

Anyway, another demon named Tarian comes in, apparently summoned by Satan. Satan partners them together on this mission, even though they hate each other, so much so that they nearly kill each other on their way out the door. It seems that the Lord of Evil is a bit of a dumbass for putting the two together on an assignment this important.

Anyway, they disguise themselves as humans by making their horns disappear, then they teleport to the mortal world and have a shitload of exposition explaining that it was Satan's son who caused the end of the world. They then come across some kind of big, dark fortress, and that's as far as the story has gotten. 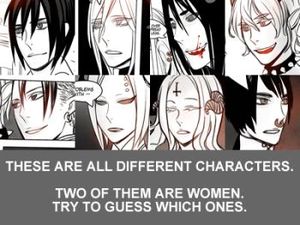 For the most part, the art is fairly competent, at least as far as manga-derivative animu comics go. Amaiya uses dynamic perspectives and seems to have an understanding of how to create atmosphere. There's not much else I can compliment it on.

There are two major flaws. The first is that every character looks the same. Like so many poorly-done manga-wannabe comics, the only way to tell the characters apart is by their hair and clothes. Hell, even that's a stretch because Isen and Tarian have the exact same haircut. The only difference is the color, and Tarian's is slightly messier. If the comic was nothing but linework with no shading, and if they weren't wearing different outfits, you would not be able to tell them apart.

About the only character who has a different face is Satan, who, of course, is nothing but a giant face.

You know, there's really no excuse for it. I often hear weeaboos claim that anime is better than Western cartoons because it's "more realistic," but you know what? People in real life don't all have the same face, and I see this shit in webcomics and even professional anime and manga far too often. And it's even worse in a comic like this because they're demons. Demons are supernatural creatures. She could have gotten really creative with the character designs, but no. She just draws the same exact figure for every character and slaps different horns on them. That's how she makes demons. Fucking hell.

She even uses the same figure for both men and women, and that's the second biggest flaw. Now, I understand that this is a yaoi comic and the characters are supposed to be skinny bishonen guys, but I literally could not tell that Isen was a dude until I saw his dick. I'm not kidding, I really thought he was a woman. You fucking fail as an artist if you can't even differentiate between men and women in your art.

Other than that, the one fight scene she drew is incomprehensible due to reliance on close-ups, and the character's horns seem to move around on their heads.

The writing is where this thing really falls apart. The comic is extremely reliant on exposition to get the story across, so much so that characters have to behave illogically to make vital plot information come up in conversation. For example, when Isen is talking to Satan, he accidentally mentions his son, which apparently enrages Satan so much that if it were anyone else who said it, he would "flay it and leave its raw flesh out for the carrion birds, to be renewed every day for further torment". It's also established that Isen has been with Satan since way back when God first created the universe, so he should know to be extremely careful not to talk about his son to him, but he does just so the reader will be given some exposition.

Also, the comic is only 40 pages in, but there's already a gigantic plot hole: Satan is apparently a some kind of idiot because this mission is so important that he picks the guy he trusts more than anyone for it, and then threatens the mission by partnering him with a guy whom Isen hates so much that they nearly kill each other. Why does he do that? It's never explained. He just decided that Isen needed a partner, but instead of picking anyone but Tarian, he picks Tarian, for no reason. Had the story continued past its first chapter, I imagine this would lead to them eventually becoming friends or some shit like that, and possibly fucking a few times since this is a yaoi comic, but if Satan wasn't such a moron, this would never happen. This is the type of thing that completely changes the possible outcome of a story. 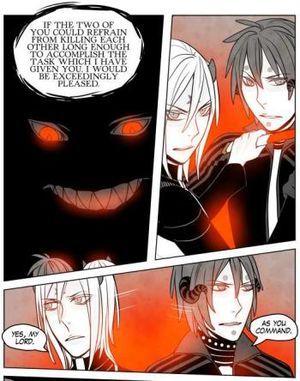 Satan is a fucking moron.

There's also the idea that Isen is the only demon that's loyal to Satan. Surely, he wasn't the only one with him when he fell from Heaven. I mean, there's got to be millions of demons, and Isen happens to be the only one Satan can trust? What makes Isen so trustworthy anyway? For all of the exposition we get, no indication of Isen's trustworthiness is ever given. In fact, when he shows compassion to the human in the scene that comes immediately before it, we get the sense that Satan can't trust him because he has a conscience, and that conflicts with the whole "loyalty to evil" thing. Is Satan unaware? Isn't he supposed to be omnipotent, or at the very least, really smart? He's known Isen for 14 billion years (or nine thousand if you go by Young Earth Creationist count), and in all that time, he's never had a reason to suspect that Isen has a conscience? Or did Isen just suddenly grow one immediately before the start of the comic?

Now, maybe I'm wrong about the whole thing and it isn't supposed to be pornographic at all, and it's all just meant to be disturbing and the fact that the fans leave comments like "Soooo sexy my God XDDDDDD" and "So beautiful and sexy at the same time" is just an accident, but you know what? It pisses me off anyway. I'm sick of all these hack writers who use rape to try to be edgy and shit, like it's some kind of instant ticket to a "dark and dramatic story." I mean, yeah, you can have rape in a story if you use it sparingly, but don't fucking do it on the first fucking page.

Really, throwing in a rape scene just for the sake of having one doesn't make your story seem any more disturbing or edgy. It makes it seem stupider, like you're just employing a cheap trick as opposed to creating actual character development. It's like you were sitting there, trying to write a character and thought, "hmm, let's see, how can I make an emotionally disturbed, tragic character? Well, the whole 'witnessed parents murder' thing's been done to death... I know! Let's have him get raped! It's both tragic and sexy! Genius!"

I don't know anything about Amaiya other than she previously started another comic called Red Ribbon, which also has to do with demons, and Devil's Shine is apparently a prequel to it, but she gave up on it after only nine pages and hasn't updated since August of 2009. Why she would start a prequel to something that's only nine pages in is beyond my ability to comprehend.

As of the time of this review, the comic hasn't been updated in eight months. While I would be happy to find that Amaiya has abandoned this thing, that also shows a lack of dedication and she never even announced any sort of cancellation, so points off for that too.

UPDATE: Smackjeeves has been shut down, and this webcomic wiped along with it.