Norad Bush said that the Earthsong Saga was “the cure for consciousness”. I object. Earthsong Saga at least had aesthetic value, consistent character designs, some cool concepts if you paid enough attention, and a villain that didn’t reveal his entire evil plot and motivation IN THE FIRST SCENE HE’S INTRODUCED IN.

Read the first page without yawning. I DARE you. 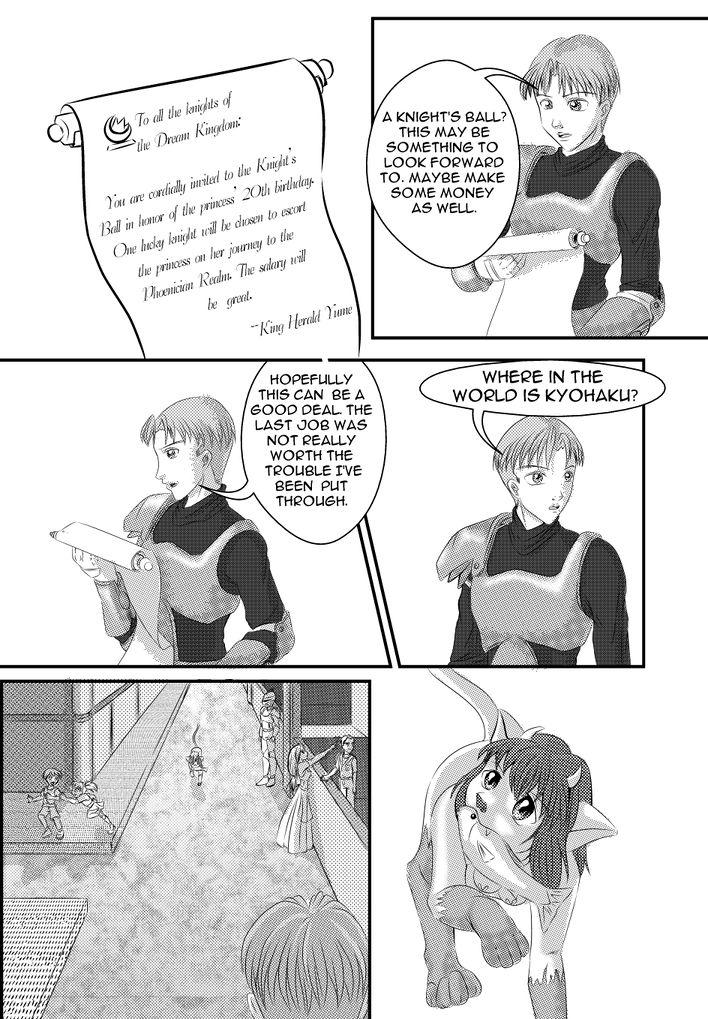 Never have I given so little of a crap so quickly.

Saying this comic had a downfall implies that it had something going for it to begin with, which this comic doesn’t. However, if I HAD to pick a point where I went from yawning to rolling my eyes in irritation, I’d say it was the part where the villain explains in great detail his evil scheme in the third page we see him. 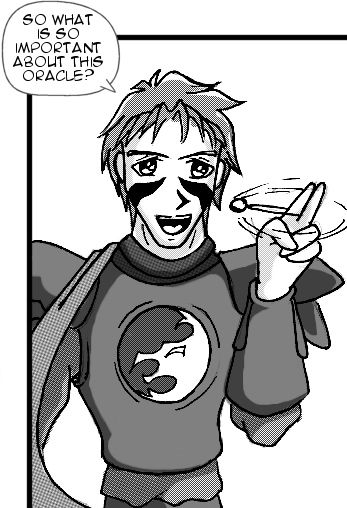 When reading this comic for the first time, I saw this frame I said, out loud, “No…. Nooooo…. You wouldn’t…” Yes. They totally did.

For a comic that is so painfully long, there is surprisingly very little that happens in it. Mr. BlandKnight decides to go to a ball to see if he can get a job from Princess MarySue. We then cut to Princess MarySue escaping the castle for no reason while her maid “comedically” panics. (Ah ha ha, stressing out staff is so funny!) While Princess MarySue is wandering around aimlessly, she runs into Mr. BlandKnight and his annoying animal sidekick, and they have lunch. Then one of the staff, Mr. BlandGuardian, brings Princess MarySue back. Later that night, a dragon crashes the party. And I know, how can a dragon crashing a party be boring? Decimated Eden found a way. Also, the dragon has a psychic link with MysteryLady, who is working for EvilTeenager. A bearded guy comes outta nowhere and kills the dragon (making Mr. BlandKnight’s presence in this scene completely pointless), which makes MysteryLady retreat, and the comic stopped updating at the point where Princess MarySue is about to introduce Mr. BlandKnight to her dad. Also, there’s this random chick who keeps trying to get a date. I have no idea who she is or what she is supposed to contribute to the story.

That is the entire plot, going into as much detail as I possibly can. The TL;DR version is “Knight goes to Princess’s party”. That’s it. That is all that happens in the entire bloody comic.

I would go into detail about how the characters SUCK, but I feel the nicknames I gave them, sum them up quite nicely. I’m even hesitant about calling the Princess a Mary-Sue seeing as, apart from a vision she gets and some crap about her being “the oracle”, she’s just as bland and one-dimensional as the other characters. The only character I feel any inkling of attachment to is MysteryLady, because the dragon she had a psychic bond with, died. Like, seriously. That's gotta hurt. She probably raised the little guy from birth in order to build up a psychic connection with it. (She calls him her pet for crying out loud!) If in better hands, this would have been a great moment to reveal some humanity for her and make the audience question who the bad guys really are. But it’s just kinda brushed off after two pages. Also, did I mention there’s a cat girl and a fairy? They add nothing to the story and are completely pointless.

Lastly, this comic is one of THOSE stories where the creator feels the need to use random Japanese scattered throughout. This wouldn’t bother me so much if the story took place in a Japan Inspired Fantasy World or something, but this is clearly medieval.

I need a pacing section. I have to. I need it if only to say THE COMIC IS THE SLOWEST MOVING THING I HAVE EVER READ. I have no idea how many pages this comic is (since the labeling changes from being numbered, then not, then having weird file names, etc.), but I’m willing to guess that the first chapter is well over 50 pages. Actually, the page labeled “56” is when the party actually starts. Yes. 55 pages building up to a party with some of the most boring characters I have ever seen. Heck, Page 57 is entirely dedicated to Mr. BlandKnight giving his party invitation to a guard. Also, this comic tries to be funny sometimes. They never get even a twitch of a smile because, just like everything else in this comic, the timing is just wrong.

I suppose the end of Chapter 1 gives some relief, building up the dragon coming in and crashing the party, but that, too, is so badly done that whenever the dragon is shown, I just hum the "Batman Theme".

I’m not one of those people who hate on the “anime style” just because. I use it a lot myself, and it would be hypocritical of me to say “lol, is anime, automatically sux”. However, I will say that I don’t like it when it isn’t done right.

This comic doesn’t do it right. 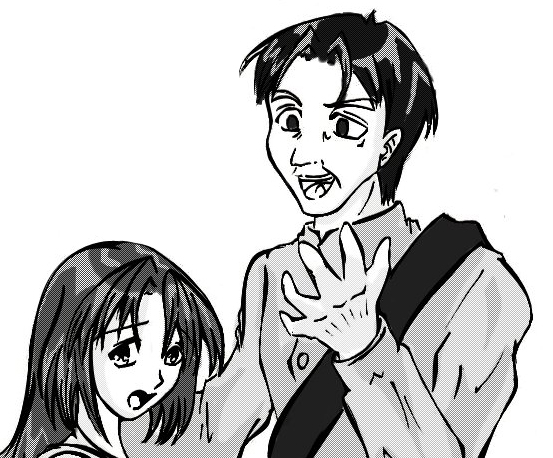 Some of this falls into the uncanny valley. I didn’t think was possible with the “anime style” since, you know, it’s a style. Decimated Eden found a way. It’s obvious that the artist is an amateur, but even with that in mind, some of this is just inexcusable. What do I mean by that? This is page one. This is page two. That’s right. Some of the pages are only partly greytoned, and some aren’t greytoned. One page is in washed out colour, but then switches back despite previewing this page in colour. Sometimes, we get the work in progress sketches. And then this page won’t load at all!

Mr. BlandGuardian isn’t the only victim of this, though. Ms. StressedMaid’s hair changes constantly. Is she blonde? Brunette? Redhead? WHAT COLOUR IS HER HAIR?! And all these problems become worse when there’s an outdoor scene at night.

Granted, the comic does get better near the end, but that doesn’t excuse the fact that the villain is wearing a T-shirt and jeans in a medieval fantasy. Or how MysteryLady is totally throwing shuriken wrong. Or this weirdly lazy and out of place Photoshop effect. Or that THESE ARE LEGIT “PAGES”.

PhoenixCrash is the creator of this snooze fest, and seems to be an appropriate name in terms of her content. The last page was posted back on August 29, 2013 at 12:00 am. She seems to have disappeared from the webcomic scene since then, though a twitter post on March 1 2014 said she’s thinking of redoing the site layout. Apart from that, I haven’t noticed anything major.

Reading Decimated Eden earns you bragging rights, as it takes nerves of steel to sit through this snooze fest. Like, I keep expecting a Steam Achievement to pop up and say "Congratulations! You read Decimated Eden All the Way to the End". I only managed to do it because of my morbid curiosity, and even I couldn’t do it in one sitting.

Near the end, I guess Decimated Eden started to become a decent comic…but then it ended. And I know why. Sitting down in front of a comic’s page and sketching it, inking it, etc. can make one page feel like it should take hours and hours to read. Because of this, amateur comic creators often run into the trouble of telling the story too fast. It’s like Decimated Eden went out of its way to avoid that, but went too far. The reason why PhoenixCrash stopped is probably because she was spending several small eternities writing almost nothing. It’s actually kind of amazing that she got as far as she did.

So, alas, we shall never know why Eden needed to be decimated. But it’s probably better this way.