Odds are, I am politically to the right of you, dear reader. I may be to the right of Darth Vader; I find your lack of faith disturbing, you suck and your brother sucks and your alliance sucks, and all that. When I saw this comic linked on a number of blogs I frequent, I wanted to like it. I wanted a better, funnier answer to Doonesbury that didn't have the shortcomings of Mallard Fillmore.

I didn't find it here.

It wasn't too bad for the first few years, but by 2007 it had become a vehicle for political rants with an occasional comic strip included.

The art is atrocious. You might look at the comic and think it looks nice, but considering he has been copying and pasting the same figures over and over for about ten years you would think someone who only intended to draw his comic once and then reuse it would have at least drawn something nice.

For the first few years it's just the same models over and over. A bit later he re-drew them and this time started connecting parts together to make poses like Buckley did with faces. Now, I know this is supposed to be an editorial style comic like the ones you read in the newspaper, but even though the art in those kinds of comic is often repetitive, it is never just copy pasted. Sure, "The Boondocks" guy draws the same thing every time, but he DRAWS it! That's the point.

The poses that he chooses aren't much help either. There is one he keeps using in the early ones where characters stand with their back to each other and their arms crossed... it reminds me of something...

What could it be? 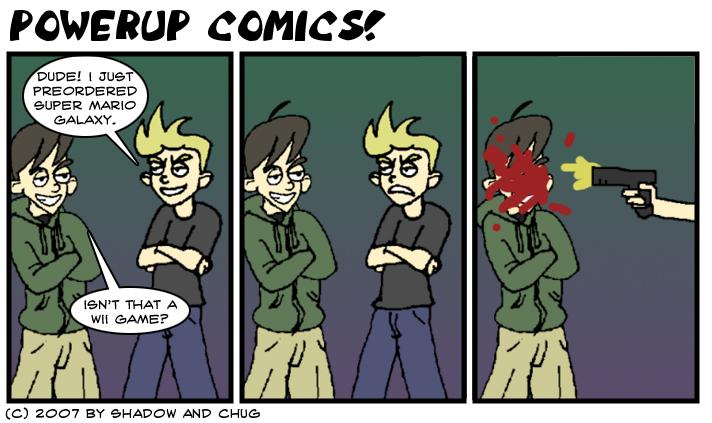 Oh, right, Powerup Comic. A parody comic where this pose was used to mock how smug the characters in webcomics often are.

But worse than this inexcusable laziness is the gratuitous nudity. From day one the comic is packed with sexual humor, and as it progresses the skimpy outfits make way for implied nudity, then partial nudity and finally full nudity in some strips in the last two years. What's most annoying about this is that this is supposed to be a political comic. I don't understand how this person expects anything he says to be taken seriously when the mouthpiece he uses is a naked slut. By not being able to keep it in his pants he embarrasses all of us, he solidifies the stereotype that right wingers are stupid rednecks to be led by the nose with simple stimuli.

And on top of it the sexual tone is so utterly ill-fitting. The female characters are almost always naked. I don't know what to make of it. What scenario makes more sense? Are they incapable of doing anything without stripping to their underpants first? Or are they so aroused by political debate that they can't have one without going nude or at least making some rude innuendo? In one strip one of the female characters is sitting atop the crotch of her boyfriend, with nothing but their underwear being in the way of him penetrating her, and instead of fucking they are arguing about Obamacare.

Day by Day didn't start off with storylines. It was mostly a joke-a-day strip with a fairly common formula: one part everyday office drama, one part reminder that men are from Mars while women are from Venus, and one part occasional political punchline.

Until the characters all lost their jobs at their shared workplace, their days were mostly alike, much like office life itself. Unfortunately, their layoff freed them to pursue their dreams: A political podcast by two of the main characters, one left-wing, one libertarian. This led to a predictable increase in the political emphasis of the cartoon. Later attempts to add plot to the comic were also not helpful, as the plot is shameless right wing pandering.

Before December 2007, the writing was fairly light in tone, if you ignore that character's ability to recite encyclopedic knowledge of current events (complete with exact dates and percentages) whenever they get into a debate. The one left-wing main character was grating and shrill, a pure strawman, but that's hardly rare in comics with a political edge. More importantly, the comic used her foibles as a way to set up humorous incongruities, and it gave her enough of a sense of humor to appreciate her own failings. It even let the other, more right-wing main characters do the same.

Muir often depicts the left as didactic, joyless scolds, and not without reason. The criticism would, however, be more effective from an author who didn't embody those traits in spades.

Furthermore it should be pointed out how much the male character looks like Muir himself. Making all this his little fantasy about how he hooks up with a hot 40+ woman with whom he goes off to win every argument in his sleep. When there start being sub-plots that include him being a super sniper for the US military, him being a secret agent who beats up and shoots criminals on the street and etc. It becomes simply unbearable to watch him lick his wounds and plunge deeper into denial about getting old.

Another problem is how one sided the comic is. Say what you will about the left, but when you make a comic that runs regularly throughout both of Gorge Bush's terms in office you can't just not have him in the comic. Hilary Clinton shows up in the comic, so does John Carry, Obama is in it every other week. But in 8 years the comic did not show Bush ONCE. Well into his candidacy the comic was still talking about Bill Clinton, Then moved on to Carry when the election came by, then did it's best to avoid mentioning him for a few years until Barack came along. The comic didn't even mention the financial crisis that was going on near the end of the Bush era, which you must admit was kind of a hot topic. The first time it was ever mentioned was one month into Obama's presidency to inform everyone that since he was elected the debt doubled and the deficit quadrupled.

It doesn't help that, as the comic changed from humor to walls of text, it became insensitive at times. Like a comic in which Muir says the reason white people get mugged in bad neighborhoods has nothing to do with money, but simply because the muggers hate white people. Or a plot-line in which the female lead's liberal sister is dating an abusive boyfriend who hits her, and as she is crying and holding her broken arm, her sister consoles her by giving her a long speech comparing her boyfriend beating her to Barack Obama's forging policy or something to convince her she should become a conservative.

There is little to tell. He's a cartoonist. He thinks that "Conservative isn't even 'conservative' anymore. It's a label for normal." …okay, that last bit is kind of notable.

Don't hate the artist. Hate the art, or in this case, the lack of artistry.