Political cartoonists stick together. Making cartoons daily in the newspaper, these "artists of the body politic" write wordy, one-page stick-figure cartoons which would fail a high-schooler out of a remedial art class. Predominantly liberal, all stupid, these pretentious shitbags make money off of their lame-brained opinions. They are literally the Bill Mahers and Michael Moores of the art world.

Now, after I just made that clear, I think you will all join me in calling for these peoples' executions. Now, while we wait for Obama to make good on his promise of "change" and finally end the lives and careers of these people once and for all, let's examine one of the worst political cartoon sites out there, run by MSNBC's own Daryl Cagle. The Rush Limbaugh of Political Cartoons. Are you scared yet? I know I just pissed myself. Excuse me while I change. Maybe Obama can help.

...Oh, POLITICAL ZING!!! Maybe I should get a job as a political cartoonist. Hey, I'd always have a job with political piss joke fetishists.

Ahahahaaaaa. Always a terrible site, but what's fascinating about this webcomics site is the pains its creator has taken to making it bad. It's as if Cagle were deliberately out to make sure his political comics site was the worst, and knew he couldn't just have a bad comic, because nothing he would ever make could be as bad as, say, Single Asian Female, so he needed something more. To wit: As if seeing page after page of badly-drawn political cartoons weren't enough, Cagle's also taken the liberty of putting four columns of text right on the front page, all in "cartoony" font that is likely to crash both your browser and your brain. It just sucks. Every one except the rightmost one has links to political cartoons in it... somewhere. The right one has political insights from such luminaries as Michelle Malkin, Pat Robertson and Oliver North, the latter of whom proves the power of South American terrorist groups in the American government by virtue of still having a job.

I could go on and on about just the front page, really, but it's literally so bad that I guarantee just looking at it is enough to realize that, so I'll move on. The back pages also suck. They have two or three comics per page, and are arranged like a cavalcade of blog posts, so that you click a particular theme's front page image, and are greeted by three comics, which take about five minutes to load. Click "CLICK TO SEE THE NEXT CARTOON!" in obnoxious political-comic style lettering, and you're greeted by... another string of three cartoons, unrelated except that they all deal with the same bore-ass theme (Detroit bailouts... "Obama's Legacy", because he has one despite not having taken office... "Captain Capitalism", which some comic artist decided was a witty idea for an animated cartoon...) Really, Cagle, just quit the Chinese water torture, get a gun, put it to my head and pull the trigger. It would be far more humane than subjecting to me to your political propaganda "cartoons".

Cagle is a cock who's done more to spread the AIDS that are political cartoons than any other man in world history. Starting out in the UC Santa Barbara's petri dish, Cagle gradually congealed, forming a goo around his incubator, forcing lab technicians to sound panic alarms around UCSB's Biology Lab. His "parents", lab robots, raised him as a good and honest child, but eventually realized he was up to no good. They tried to drown him in a vat of LYSOL, thus showing more humanity in their cold steel robot hearts than any man ever could, but sadly failed. This, to the detriment of the human race, was a LYSOL-resistant strain of Daryl Cagle.

Even the dark streets of New York were not enough to stop Daryl Cagle. He fought on with his devious plans, joining Jim Henson with Muppets. It was Cagle, alias streptococcus pyogenes, that would eventually kill Jim Henson. Once Henson realized that he had allowed Cagle to illustrate published magazines, books, calendars and other products, it was only a matter of time before he realized that he had given in to Satan. He then lost all lust for life and love of children and humanity, and allowed himself to die so that Cagle might die also. Preferably in an inferno of flame and torturous pain.

Cagle moved to Honolulu so that he could try to kill Barack Obama before Obama could grow old enough to take the Presidency. While there, he drew political cartoons for Hawaii's Midweek newspaper, and then the Honolulu Adviser. All of these cartoons, as with the rest of Cagle, were epic failure. Slate hired him as a political cartoonist in 2000, and then MSNBC in 2005,

He was the cause of the leading political cartoonist cartel "syndicate" Cagle Cartoons, and thus produces most of the political cartoons in the United States. The only one of these that is not terrible is Tom Richmond, who does illustrations for MAD Magazine. He, like Jim Henson, will likely kill himself for what he has done in working to extend the power of Cagle. 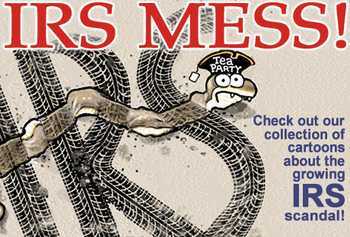 Advertisement picture on the front page

THERE IS NO ART HERE

What you expect from political comics. Banal, pretentious, wordy, obnoxious. Puts words on random objects so the reader will "understand" what they are, because the cartoonists aren't talented or clever enough to make this obvious. I know I couldn't, but since they're professionals and I'm not, I expect a bit better. Or at least for the comics themselves to be attractive, which they are not, except for Tom Richmond's comics, which I think we can all agree are awesome.

Indeed, after reading through these abominations I can say with authority that I think Richmond should not only lead Cagle Cartoons, Inc., but should also teach all its artists how to draw. Especially John Trevor of The Albuquerque Journal. He's as obnoxious as the guy that starts every one of his columns with "God Bless America, and How's Everybody?" Arrgh. Seriously, screw political writers, and especially screw every one of the guys that draws the political cartoons for "Daryl Cagle's Professional Cartoonists Index." Except for Richmond. He's awesome.