Darwin Carmichael Is Going To Hell

I've read this webcomic some years ago, but I don't remember how I found it. It's probably by one the list of links that some webcomics have for promotion, but I'm not 100% secure. What I'm secure it's that I'm still cold about the Finale. It's so out of nowhere, that I still remember vividly that chapter. And the worst part it's not enough to save the rest of the webcomic.

Note: The webcomic was taken down from the principal page for unknown reasons while writing this review, so all the the links of the review was written with the digital copy of the website in the Library of Congress. Probably it got in with the same method of others SJWs webcomics, but I can't assure anything.

Since the second adventure it's started to spin into a vicious circle of episodic plot that turns into a sitcom of nothing of consequence ever happening, making it boring and repetitive.

The location is in Brooklyn, an urban city raided mythological creatures, deities, hipsters and artist, Ugly Americans scenario, for more reference. Our protagonist is Darwin Carmichael, a normal guy that is trying to pay his gigantic bad karma bill with good actions to, as indicated in the name of the webcomic, not end in hell when he dies. What he did to have this bad karma? Well, during his teenage, he leaves accidentally retarded a reincarnation of Dalai Lama, because he was distracted making out with his girlfriend. If you believes this is an unfair punishment, don't worry, the webcomic also remark this every opportunity it has. During his misadventures, Darwin is accompanied with some of his friends, some of them are: 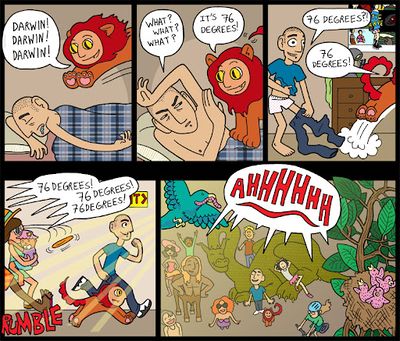 If you ever see an early Adult Swim cartoon, then reading this comic will remember every time you see the art. Why? Because the quality of it. Most of the faces are really... flat, lack of expression. Some of the faces also look oddly extreme - bordering on caricatures - like, look this example. Everything of the art of the comic feels like an adult cartoon from 2001, but with more "quirky" art style, even more than Questionable Content. Also, the colors are really garish sometimes, and the background stage it's sometimes too complex for the art style and it looks weird. Near to the end the art denotes improvements compared with the start, but still have the same problems that before. On the positive side, at least the style does not make you want tear out your eyes.

You want another reason to think this is out of a television series? Well, hold tight, because it will be a wild ride. We will take the "chapters" of January, February and March of 2009 for examples: 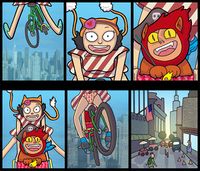 Me: I read the webcomic for the plot. The plot:

As you can see, not only the amount of pages per "chapter" is really inconsistent, but every event is auto conclusive, with little or zero continuity. And if you think this only happens in the start of the webcomic, you're wrong. This issue is present in all the webcomic; it wastes so many pages doing absolutely nothing. For examples of future chapters: A character is turned into a cat via a cursed hat. This is undone, and then... back to normal and never mentioned again? Or the time the bad karma guy meets, fucks and accidentally melts a snow witch? The only continuity of this is that Darwin was traumatized about it and he isolates himself from people in his room, but later is forgotten that trauma. The only character that has some type of developmental is Skittles with the mini-series of old owners of him, but nothing more, truly. It feels like a sitcom where everything reset between episode and episode, so many of these arcs should have had a greater impact on the comic overall.

And we are still not talking about the disgustingly woke times that has this comic, like this or this. Oh, here we go - a half-human half-succubus woman who tries to suppress and ignore anything sexual - can we get a "I'm asexual" dropped? Nah, we don't get that, pfew. Luckily, the LGBT+ and communist propaganda in here is minimum and little explicit… Yeah, we have a lesbian shower scene, but there are no visible bits, so…

I can end this review here, but I can't pass to the next section without talking about this:

There is no way you can make up this or sweeten it, so I will say it directly… It's the end of the world. Yeah, Ragnarok, Yawm al-Qiyamah, Frashokereti, Rapture, like this, out of nowhere. We start slowly with this, okay?

The arc starts with this mural, what turns out it's a dream, Darwin get up of the bed to found strange things in the neighborhood: Matt and Melete did an artistic ritual, every single person is scared of him, Pat is obsessed with Labyrinths, and finally, the stoner angels for one time looks like real angels and want to reclaim his soul and they take him to an unknown place. Meanwhile, the half-succubus girl arrives at Darwin's apartment and she meets Melete, Matt and new character that never came up till now: Patches the Werewolf. The four have a discussion of where is Darwin and what is happening, until Skittles comes to scene, and it turns out that he became Darks. Apparently the minor mythological creatures can have an early pubescence if it’s close to great magical aura. And this effect is not exclusive to minor creatures. 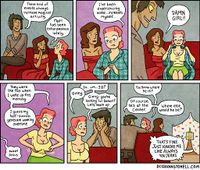 Seriously, i read the webcomic for the plot! STOP LOOKING ME LIKE THAT!!!

We jump to Darwin, where he awakes in a strange room with a bird that appears in the arc of the snow witch. After a while, the stoner angels bring Mina, the ex-girlfriend that put in his bad karma problem in first place (although still is an accident), and they lock her up with him. The arc present us the villains that caused this: three deities that also never appeared before. It is also shown to us that they also kidnapped Ella and other guy that also never appeared till now. After how show us the side characters getting ready for the rescue, we are shown with the first phase of the villain's apocalypses plan: two death battle of the two with the best karma and the two with the worst karma, respectively, to select the riders that will bring the apocalypse. Skipping the preparations from both the event and the werewolf, we arrived to the day of the combat, where Pat and the girlfriend of Ella are visited by Jesus Christ and Ra, and they gave them a +2 sword and a magical whip. The combat started with the two with the best Karma: Ella and the new guy, and the new guy died almost instantly. Then came the battle between Darwin and Mina, but Mina try to kill Ella before she get out of the battle hole, but Darwin stop her and killed her accidentally. My god, Darwin, I'm starting to think that you're doing this on purpose. Meanwhile the villains lead Darwin and Ella to their apocalypse rides, Pat, Ella's girlfriend, the werewolf and the half-succubus girl run to stop them, and they make it. But Darwin realizes that this can't be stopped without a sacrifice and he lets himself be killed by the werewolf. We jump to two months after the death of Darwin, and we see Melete moving out of the apartment and breaking with Matt. Ella meets with the karma caseworker of Darwin and he says her that the sacrifice balances his karma debt and managed to enter the heaven. Pat, Melete and Ella celebrate this with a toast while the werewolf hears the celebration from the window and runs of there. We end this history with Ella and Skittles in Darwin's room, hearing music and enjoying their last time together.

So, you will ask: What is the point of this description? Well, this is because 1) it is a really interesting ending, and 2) denotes that the author didn't know where is going with the webcomic. I will give the comic props for actually ENDING and wrapping up the whole "bad karma" thing. That said, I will also shit on the comic for honestly making it so much more interesting in the end while it wasted so many pages meandering. The last 50-something pages are where the really interesting stuff is going down - that said, it's NEVER explained why these gods and spirits are able to just up and kidnap people, or what is the role of the werewolf in this chaos, or who exactly is the new guy that battled with Ella. The setting itself is never explained. Worldbuilding to give context to the events of the comic? Who needs that?! Take these books of mythology and do your research! A lot of last-minute characters would have benefited from having had introduced a lot earlier. As someone that readied the entire archive, I was left cold with this ending. Because WHY you made me to read all the boring arc shit of before, when this 55 pages shows you can do a better job? I don't know what more to say, I'm too angry to continue this.

Sophie Goldstein is the co-writer and artist of the webcomic. She lives in White River Junction, VT. She is a Cartoonist, illustrator and comic's instructor at Lesley University. She has right now dozen of webcomics written, if you look the portfolio of her website. Most of them... are really hard to explain, but is pretty clear that she is a feminist. Her most new release is An Embarrassment of Witches, a pay-to-read exclusive graphic novel.

Jenn Jordan is the co-writer and crayonist of the webcomic. She lives in New York and she is also the co-author of An Embarrassment of Witches, but hard to know more about her, because she deleted her twitter account, she didn’t update her Tumblr since the ending of the webcomic and if you look her name in google, appears a politician of the same name.

You don't watch a series or a cartoon just for the finale, you don't play a game just for the final and especially, you DON'T read a book or a comic just for the finale. Then why bother to read this? Save your time. The only good thing about this is the authors have the decency of ending the webcomic and not roll it out like a bubblegum.

Besides, while writing this review, something happen to the main page and all the webcomic is gone. So the only means right now to read the webcomic are: or going to the digital Library of Congress for their archive (like I did in this review) or buy the physical book from the author. You decide.