A BWW member mentioned this webcomic on the forum, and I got curious and checked it out. Amazing how the same author who did the awful Femmegasm is doing something much better now.

None; in fact, it has actually gotten significantly better when color was added.

This webcomic incorporates a cast page for the major characters, who are "pukas", namely evolved bunny creatures (the author's description) who only wear shirts and/or jackets, except for Malo Dust who wears boots as well, being a depressive goth. More specifically:

Lider Quote - "Strong-willed, brave, curious, and adventurous", according to the cast page, and also not very smart. He has a strong one-track mind, and is curious about what lies in the caverns around their viilage, which is in fact how this whole story starts. He even literally drags Apacado Sash, his sort-of girlfriend, along with him at the story's outset to help him explore the caverns in question.

Apacado Sash - "Very studious, intelligent, and physically strong", but with low self-esteem, and is somehow unable to prevent Lider Quote from dragging her away from home at the story's outset. Perhaps being his sort-of girlfriend might be the reason.

Portazo Fazbear - "Laid-back, optimistic, calm, and maybe a little lazy", but mainly a would-be ladies' man who is invariably unsuccessful, yet keeps on trying anyway.

Artifice Frisk - "Sarcastic, pessimistic, and has a strong dislike for authority", yet is also Portazo Fazbear's best friend and constant companion, and also an artist carrying his art supplies with him most of the time.

Alegre Dust - "Very chipper and positive demeanor", and tries to help people, even though she thinks she knows more than she actually does. (Usually people with that attitude are not nice people at all, but this is a webcomic.)

Malo Dust - "Feels hate and disgust for most everyone and everything", though she does have a penchant for cooking. Yes, really.

Apacado Sash is sitting at her desk when a rock is thrown through her open window, knocking her out. Unfortunately that was not Lider Quote's intention, he was merely trying to get her attention. Lider succeeds, but Apacado tells him to go away. Lider's response is to kidnap Apacado and carry her with him. Meanwhile they are spotted by Portazo Fazbear and Artifice Frisk, the former having created an explosive powder. The four of them meet and Lider announces his quest to search for his father. Lider and Apacado's next destination is a repository for relics from the past, including glow-in-the-dark light poles. Meanwhile Portazo and Artifice test the former's explosive powder, but after doing so a mysterious stranger arrives and accidentally sets the barrel on fire and makes matters worse by sending the barrel away to explode near the village. The stranger disappears, leaving our heroes to end up holding the bag. The good news is that Lider has found his father but the bad news is that he had been injured in the explosion. Lider's father had been searching for Lider's mother, who had been part of a prior expedition to explore the caverns outside the pukas' village and had never returned. Artifice finally loses his temper and rants against the village elders, only to get into trouble for it. Our heroes are set before a trial by the village elders, who find several of our heroes not guilty, but Portazo is found guilty and sentenced to exile.

Our acquitted heroes plead for clemency for Portazo, but Alegre Dust appears as Portazo's lawyer, producing evidence meant to exonerate Portazo, but Malo Dust enters the courtroom and unintentionally ruins things for her sister and Portazo by mentioning the evidence was faked. But just as things are about to become catastrophic for our heroes, Lider tells the judges that he and the other defendants will go on their own expedition into the caverns in lieu of any legal punishment, and the judges agree to that proposal. Our heroes are pleased, except for Apacado who is deeply upset at having to go. However, to her surprise, Apacado's parents are actually pleased that their daughter is going on an expedition, as her aunt had been lost on a previous expedition and they had felt their daughter had been living a directionless life. Besides that, an actual romance starts developing between Lider and Apacado. So the next day, the expedition begins.

I think we can stop here; it's obvious by now we're seeing a real story with appealing characters and we shouldn't be expecting Sonic the Hedgehog or Rainbow Dash to enter this webcomic anytime soon. Or for that matter gruesome violence or toilet humor.

Before I start, let's take a look at the artwork from Robbie Allen's previous creation Femmegasm:

Just ignore the dialog in this image, if you will.

That webcomic was discontinued in 2014, so how does the artwork look in this one, which was begun in 2016? 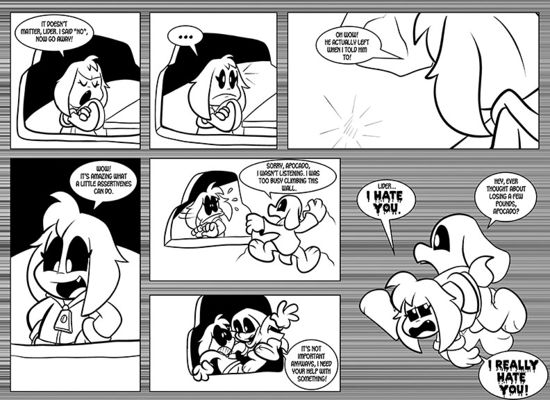 One of the first strips.

This webcomic originally began with monochrome artwork and without shading other than shaded backgrounds, though the characters were animated without resorting to exaggerated expressions that cartoon characters typically have. Unfortunately the panels were also small with difficult-to-read text.

However, the author has informed us that he has gotten enough Patreon donations so that he is making his webcomic in color from this strip on. Better still, the strips are larger and more readable: 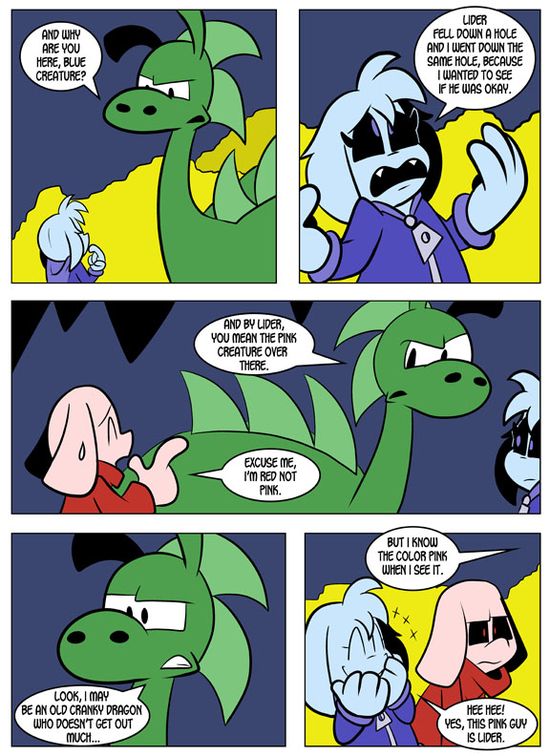 One of the latest strips.

It's not Rembrandt, but the color has made a significant improvement to the look of the webcomic.

Despite the very cartoony characters and farcical events, I found myself caring about our heroes and what was going to happen next, as well as being interested in the world they were in. Rather a surprising achievement for a cartoon about silly-looking characters, but the author has pulled it off. The author does incorporate pop culture references but does not overdo them.

Unlike Femmegasm, this webcomic is solely authored by Robbie Allen, using the pseudonym "Pembroke W. Korgi" (a takeoff on the name of this breed of dog). You can learn more about this author by clicking on the link posted above.

As mentioned before, Da Pukas is an adventure story using silly cartoon animals, though it does not overdo on the ridiculousness and the characters are rather stereotypical but still credible. Basically the story is fluff but appealing fluff, and definitely worth reading.