This is a fairly famous comic around the 'Net. That's obviously due to the sheer amount of dark humor and lack of moral censorship always present on the strip. As so, it's just this easy to stumble across it on forums and social networks and whatnot. That's how once I knew this strip and, just as I do with every webcomic I find along the way, I archive trawled it right from the beginning... ...and that's why I'm doing this review.

It's hard to pinpoint without doing another archive spelunking, and I'm not with the time or the mood to dive into the 1800-strip long (and growing) archive to find where exactly the comic started going downhill. I'm putting my bets on the good ol' premise downvalue. Simply, making crude humor with stick figures got old too fast, but they never stopped. They never stopped. 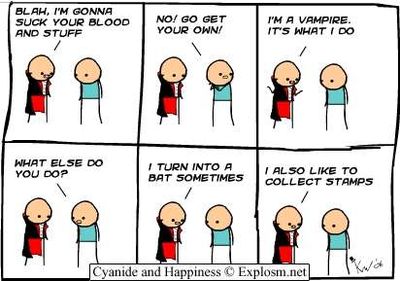 I also forget to put punchlines in my comics

C&H has no plot, just individual strips, with a few ones that have any connection with each other. Which, in a way, is good, because a comedic gag-a-day strip that tries to develop a plot usually fails hard.

The only little speck of continuity in C&H's history comes in the form of running gags, recurrent characters (of which only one or two are still around) and referencing to older strips. All you'll get, mostly, is just nameless generic characters being horrible and crude in a new way every day.

Cyanide's art is obviously of the "simplistic" kind. Obviously, because all you see are are stick dolls (i.e., human figures with chubby bodies and heads, and only sticks for arms and legs) and either very simple decoration or some stuff that, sincerely, look like a clip art. For instance, this panda. Now, I could just leave it as this, but I'd like to add: this comic features not one, not two, but four artists. And, incredibly, you can actually tell who's who...

For example, Rob's figures have this strangely shaped heads that look like round trapezoids, for some reason, as if everyone has megacephalia. Matt's, on the other hand, have round little heads, with long eyes and linear mouths. Dave's sometimes do not feature their mouths(usually when not speaking). Finally, Kris's characters are far shorter than the rest and also have the same vanishing mouth problem. On the other hand, Kris is definitely the best of them, since it's clear he at least tries to make a good job with simple coloring and shading and different thickness on lines. Still, it's like taking a dump with style: it'll still be shit.

Summarizing, C&H's art is inadequate, in a way, say, The Perry Bible Fellowship's featureless people aren't. With PBF, you have a degree of familiarity that makes the dark punchlines more "real". In Cyanide and Happiness, it's all crude and that ruins the effect it tries to convey by being too simple.

This is where the controversy is. Some will say it's retarded, some will say it's bold. It's mostly simply bad, though. The humor works on a hit and miss basis, which is to say it'll once score a good joke and then have days of shitty or simply bland episodes following. In fact, in many issues there'll be no real attempt to humor, but just a shot at shocking. It's when you see the setup for a joke, but then all you get in the end is "MISCARRIAGE, LOL!" That is, if the comic doesn't end on awkward silent panels that look like saying "huh? huh? get it?" Or, worse, silly tries at gross out humor that don't work because it's neither gross nor funny.

Or, the worst of all, recycles jokes, reenacted by stick figures. Which leaves this reviewer wondering: was this necessary? Weren't those jokes bad enough in text only? But, alas, it seems it is too difficult for four different people to come up with fresh jokes everyday, I suppose, even when they don't need to watch out for extra time to work on the quality of the art. Also, just in case you didn't get it, this was sarcasm.

The characters... you see, they have no character at all. That's because there are just a few recurrent characters, mostly they'll just draw random stick people for the horrible situation they need today and forget they ever existed. On recurrent characters, they could at least be recognized but, oddly, they rarely appear these days. The only recurrent gag you can count on seeing is "Zombie Jesus Day" (i.e., Easter). Then again, it might be for the best.

As noted before, there are four authors of this strip. I haven't heard much of any, though. For all I know, Matt, Rob, Kris and Dave are simply authors of a very controversial webcomic, and I couldn't care less.

So, Cyanide and Happiness isn't outright horrible. We all know there are things out there much much worse, which I'll avoid naming just to be safe. Still, it has glaring flaws, and as so we could not let it pass unmentioned.

Here's a topic I was wondering if should be addressed or not. Namely: imitators.

Webcomic veterans must be familiar with how Penny Arcade was the trigger for many a gaming webcomic, as well as the establisher of many a trope related to this genre: the two guys (on a couch or otherwise), the immersive gaming, the "one writer one artist" pair and, of course, the goddamn inanimate sidekick (fortunately, PA dropped DivX long ago... but the same is not true of its imitators). Saying that any gaming comic is a rehash of Penny Arcade is quite commonplace (though not always true), and the important point here is: people were mimicking PA because it was good.

Cyanide and Happiness... is not. I gave the reasons already, but let me reiterate: it works mostly on shock value, the humor is rehashed, the art is lazy (and stick dolls are just the start of it!). And yet C&H manages to be successful. Thus, people mimic it. But the point I'm trying to make here is: if you copy shit, you get shit! And that's the common point of all the imitators.

Outside of that, such imitators(I will be kind enough to not provide links... but it ain't hard to find them!) fall into one of these two categories:

But is it fair to blame C&H creators Rob, Matt, Dave and Kris for that unending shitstorm? Maybe. I haven't researched enough on their online lives to know if they incentive or not these attempts of emulation. And if they condemn them... well, they aren't doing it hard enough!