"Machinima" is defined as the use of real time 3-D graphics rendering engines to generate computer animation. The word itself is derived as a portmanteau of "machine" and "cinema" (and misspelled). To the lay person, this means "movies made from characters in video game engines", the most popular example of which is Red Vs. Blue. But what if a creator wanted to use this technique to not make movies, but sequential art? What things could emerge from video game characters getting into hilarious comic situations without having to draw a stroke?

Some jackass on the internet asked himself the same thing once, and the result is Cru the Dwarf.

Cru the Dwarf, as of this writing, is the number two webcomic in the Top Webcomics List, even besting the abominable TwoKinds. It is at once satisfying and depressing that this monstrosity is at the number two spot. Satisfying because I don't have to work that hard to find shitty webcomics to rip to shreds, and depressing because it is nearly the most voted-on webcomic on that godforsaken list of shame. And why? Well, we'll get to that later.

But then tell that to the voters on Topwebcomics.com. Fucktards.

There is no downfall if the webcomic starts at the bottom of the scum bucket.

The story seems to be comprised of a series of episodes following the misadventures of the titular character, Cru the Dwarf. All the episodes follow the same basic formula:

Yeah, that’s pretty much it. There's some other bullshit about Cru and girl-elf friend on the run because he blows some crap up, but seriously, do you care?

Cru the Dwarf is done by Sean, a 22-year-old male according to his deviant art account. He likes World of Warcraft, but doesn't seem to like censorship. Sean is also a fucktard who doesn't know how to read Blizzard's non-commercial license agreement which clearly states you cannot use World of Warcraft machinima for commercial gain (like ad sponsorship!) No, no, Mr. Sean goes about his business, putting out WoW fan service pics in conjunction with his shitty WoW webcomic. It's all about the Benjamins, or ad dollars in his case, and while I don't think he's making a lot of money at this, the fact that he's making any money at all is totally illegal. Sean is a miserable opportunist and a stupid one at that. Odds are good he's probably a virgin too.

What the fuck is there to say, really? The art is comprised of World of Warcraft screenshots. Screen shots. From a video game. Machinema is the lowest form of 3D art for comics. Period. In fact, I do all other artists out there a great disservice by calling this copycat bullshit art. The character models were made by Blizzard. The backgrounds were made by Blizzard. Therefore, any asshat who comes along and puts a bunch of snapshots of OTHER PEOPLE'S 3D WORK on a comic page and tries to call it art is not a fucking artist. He's a cocksucking plagiarist and does not deserve your money or respect.

Now, machinima fans might say that I'm being hard on the "art form" and that just because something is made of machinima it's not necessarily bad. No, it's not necessarily bad, but machinima is certainly a symptom of badness. The creator is someone who, in lieu of actual artistic ability, decided to rip off pre-designed characters in a video game and puppet them. That's fucking it. That's all we're looking at here. And one may argue that machinima is merely a tool, that the output can still be considered artwork. After all, that snazzy digital artist on CG Society didn't script Painter from the ground up, did he? So he's the same as a "machinimist", right? Wrong. Snazzy digital artist still had to start off with a raw, white canvas and build a work of art from that blankness, using knowledge of anatomy, perspective, color theory, and fucking creativity. The machinimist, on the other hand, simply takes models someone ELSE designed and drops them into an environment to pose. They are not the same. The machinimist is the lowest of the low, and even makes Tim Buckley's terrible copy-cut-paste-hideous patchwork method look good. Hell, at least Buckley's stupid drawings are his (Penny Arcade copycatting notwithstanding).

The writing is shit. Shitty shit on a pile of shit. Really.

Much of the dialogue depends on stupid trite humor that we've seen a million times before. Whatever jokes don't depend on utterly hackneyed material you've seen time and again are all about sex. And dwarf hard-ons. And bestiality. And elf titties. You know, hilarious shit like that. If the intent of this comic is to be funny, it fails. There is no wit here, only the kind of humor that might entertain a 13-year old boy for a solid ten seconds. 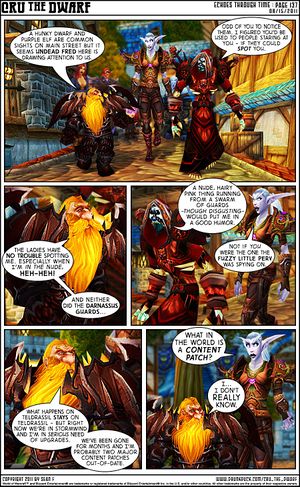 Breaking the fourth wall! How witty can this webcomic get?

The plot is meandering and doesn't go anywhere meaningful. Really, the whole thing just follows the dwarf through a series of stupid shit ranging from cannons that blow up the world, strip clubs, and dirigibles. None of which actually comes together into a meaningful narrative people can actually care about.

The characterizations are non-existent here. Cru the Dwarf is your standard issue perverted barbarian. That's it. There's no fleshing out, no third dimensions, no personality, no nothing. Even worse than that, the Girl-elf friend is constantly exploited for her goodies and doesn't even get a name until 30-something pages in. That's how insignificant she is. Cru the Dwarf doesn't care what her name is and neither does Cru the author. They just want to see her jumblies. If there's any personality to be had with her (and I'm reaching), she'd be the voice of reason to Cru's alleged zaniness, but given how fucking moronic Cru is, not much personality is required for that. I suppose that, for a comedy, character development isn't all that necessary as long as the lulz keep coming, but there are no lulz here so I'm taxing it double.

Ultimately, what we're looking at here is some guy's stupid made-up world with his World of Warcraft characters. He's playing out his stupid little scenarios in this fucking idiotic webcomic like it's Robot Chicken, but with all the humor sucked out and in its place, tits. Lots of Elf-girl tits. That's really the whole point of this Godforsaken disasterpiece. Prostituting blue elf girl tits for cold, hard cash. A repugnant motive, though a license to print money if one knows how lonely those WoW nerds really are. The results speak for themselves.

(On a personal note, I don't get the appeal of the blue elf girl tits. The poor girl looks like a suffocated stripper. It's more creepy/necrophiliac than alluring.)

Cru the Dwarf may be small in stature but large in sucking. I can't figure out the appeal of this shit. Admittedly, I am not a World of Warcraft fan. I don't really like World of Warcraft, and I'm being up front about this to make a point. While fans might think I have no credibility, reviewing a World of Warcraft webcomic that's not aimed at me, I say this: take away the trappings.

Let's pretend for just a moment that I don't hate World of Warcraft with the fire of a thousand suns, that I don't actually prefer sunlight/exercise/regular employment to the World of Warcraft experience. And let's pretend for a moment that Cru the Dwarf is just a story about a dwarf and his usually naked friend-girl. It's still a bad webcomic. The characters don't act like real people at all, the jokes are not funny, and the plot has no real point to it.

This comic has no redeeming value to it, World of Warcraft or no. And WoW players should learn to be more discerning in their sources of entertainment. THERE'S BETTER OUT THERE. Just because it's got the name World of Warcraft associated with it doesn't make it automatically good. Wouldn't you WoW fans like a webcomic with beautiful drawings or at least more imaginative 3D renderings than this? Would you guys like better writing than this? You deserve better and you know it.

Just because Cru the Dwarf is stolen derived from World of Warcraft, does not make up for the writing's shortcomings and utterly cheap use of screencaps in place of actual art. All trappings aside, Cru the Dwarf is a terrible webcomic.