This comic isn't the worst, not even close. It is however kinda crappy and flawed, but this more of an attempt to "constructive" and "helpful" rather than to simply tear into it.

I want to say "it always sucked" but it might have had potential at one point, the suicide April Fools joke probably marked the beginning of the end, cos suicide bombings apropos of nothing are always super funny you guys! The April fools might well be that there was no April fools and that was actually part of the story.

It began as a gag comic, putting transformers in ordinary situations kind-of and riffing on unrelated WoW shit. Then within a few strips developed a story. Not really much to say about the story, the broadstrokes hold the promise of a interesting if uninspired story.

However, constant out of continuity comics breaks the flow

A brief rundown of the story thus-far.

The story is broken down into nine distinct arcs.

The Decepitcons kidnap an Autobot, only it's an Autobot nobody gives a shit about, some sociopathic nutjob by the name of "Sunscreamer", interestingly I only know he's supposed to be a misanthropic nutter with a superiority complex cos I consulted the wiki to locate a photo of him, at no point in the story does he demonstrate any of these traits.

eventually they attempt to rescue, some shenanigans occur, a healthy dose of suicide bombings. and etc

The Return of Optimus Prime

This is the current, and sporadically updated one, having received only one update this year, it's looking to be the end for this comic.

The art is bad. Not claw your own eyes out horrifying, just bad, Luck Lustre for lack of a better term, it's attempting to ape a style, and coming up short. It doesn't significantly improve in it's 13 years of running.

The cartoon the comic is mimicking versus the comics version

When it bothers with backgrounds, They're often thick bold colours, with no defining features, They add more later, but they remain inconsistent and wonky.

Characters are blocky, given the subject matter, that's kind of expected, yet their faces and chins will often magically become round in the next panel, or oval, or something else that isn't vaguely what I recognize a transformer to be. 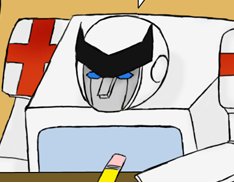 Look at that sexy face, LOOK AT IT!

http://www.comicsindisguise.com/comics/2015/unicron-page919.html - The art did evolve, which is good, the action scenes are kinda painful throughout, and they've gone from little to no lining, to drawing gigantic black outlines on every character.

There's a golden rule in writing, and that rule is show, don't tell. This is even more important in a visual medium. Instead of telling us that your character is incompetent, SHOW US THAT HE IS. Don't write it off as "Starscream fucks up a lot and never does things right", send him on missions and let us see for ourselves that he's an idiot. This is important, it allows us to develop a connection with these characters and makes us care about them and their exploits.

This is especially important when using somebody else's characters, it's poor from to assume all your readers will be familiar with them, especially the more esoteric and obscure ones, name dropping them and assuming we're all onboard with who they are, and what drives them is a very quick way to alienate and confuse all but the most dedicated of the fanbase, who in turn won't be overly fond of the creative license you've then taken with their beloved franchise.

Another important thing to note, is that if your transforming murderbots can be swapped out with lethargic fridges, then you're doing characterization wrong, consistency is important, like, just super important,

I can't really find a lot on the author/s, other than a vague mention over at the old forum

One of the strip [insertlinkshere] lists an entire team of people working on this, including a QA guy, so yeah.. there's that.

All in all, this comic isn't the worst thing ever made, it could however use quite a lot of improvement, I found it tedious to slog through, but it didn't inspire the kind of mind boggling confusion that adam4d does or the revulsion that U.S. Angel Corps does.

so hopefully you've learned something useful from this.