I discovered this comic one day as I was flipping through the list at TopWebComics, looking for something new to read. The idea of a bondage themed webcomic intrigued me. Too bad it didn't live up to the hype.

The downfall of the comic came at the very beginning as we’re thrust into the story with no explanation of the events. The terrible artwork doesn't help much either. Neither does the fact that none of the Dom/Sub relationships in the strip are particularly healthy. The comic has Laura entering into a Mistress/Slave relationship with Sixx, yet she's ultimately ignorant of how such a relationship should unfold. Not only that, but she admits to knowing very little about her Mistress. Now even in an ordinary relationship, entering into something that's about the equivalent of marriage without knowing even the basics (like where the person lives) isn't exactly prudent.

How do they solve this? Do they a) Hold a whip-off. b) Ask the slave if she wants to be freed. c) Go to the police and reporting that someone is being held against their will.

If you guessed “a”, then you are right- take a cookie. Now one would assume that this would be a great time to insert a little backstory, but no- we’re given scene after scene of slave girl Laura being whipped. So much for story.

Later plot lines have Laura getting jealous of Sixx's supposed relationship with the maid. Now in a real, honest BDSM relationship you have to communicate. Despite the idea of "I'm the Mistress, what I say is what goes", everything is supposed to be equal in the relationship. If you are jealous, you should be able to voice that concern. In such a scenario, you would imagine that Sixx would sit the both of them down and explain the boundaries of each position as well as get each person to voice their feelings so they can go about making it work. You'd think that'd be the case, but ultimately this gets as messed up as the "forced into being a slave & you can't say no" crap from the beginning of the comic.

Sixx drugs Laura without her consent or knowledge, then has her get her latex shined (i.e., groped all over) by the maid. Yes, you heard that correctly. Rather than do what should be done in a healthy relationship of this nature, Sixx drugs Laura. Trying to get them to bond and solve their differences? Why talk when you can just throw them into heavy suits and tell them that if they don't move together they'll get shocked. Yeah, that'll fix everything.

Despite Sixx's attempt to apologize, she then goes on to ask why Laura is so upset over an encounter where she was drugged without her knowledge, didn't really give her consent and groped when she was willing to participate in encounters where she knew what was going on, gave her consent and wasn't drugged. You know, if you have to ask someone the difference between the two types of encounters then perhaps you shouldn't be a Mistress. This type of stuff really isn't brain science. Consensual means that she agrees to being drugged and getting groped. Non-consensual means that you slip her an herbal equivalent of a roofie and then exploit her inexperience with BDSM. Even though she agreed to sexual encounters in the past, that doesn't automatically mean she'll be up for everything in the future or that everything you do is automatically OK.

Not only that, but there is also a difference between knowing you and your partner have done a random sexual encounter and then finding out that your partner has someone living in their home that they may have been intimate with. (All that happened was groping in the maid's instance, though.)

While the artwork is better than some out there, it’s still pretty poorly done. The backgrounds are rather sloppy and flat, plus the character of Sixx never really seems to change expressions. Why people seem to think that anime is the only way to illustrate is beyond me. 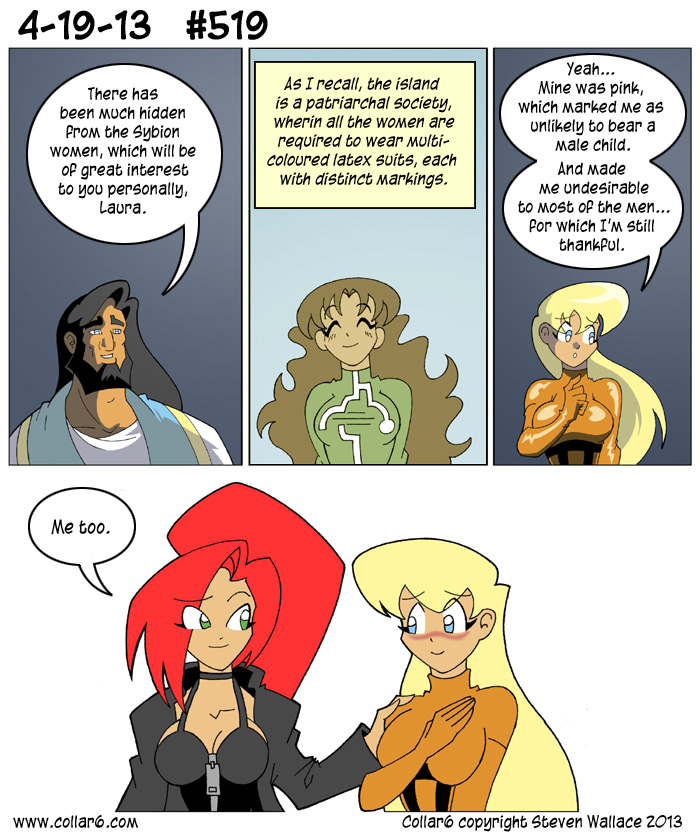 The current strip as of this writing

Mistress Ana writes the comic and her slave Wolf presumably draws it and put it up on the website. Ana herself claims that she is an artist and apprentice tattoo artist. (Which if it’s true, then why isn't she stretching her art chops and illustrating her own comic?)

UPDATE: Okay, slight snafu. Evidently, the copyright holder and therefore author of this comic is listed as Steven Wallace, also known as "Wolf" in the Collar6 forums. Here's the exact quote from the Wikidot Gods:

The comic is authored and drawn by Steven Wallace, also known as Wolf and Wolfe. The comic has a clear copyright notice on it with S. Wallace as the holder. And one look in the forums has Wolf all over it with his title of author and artist right underneath it on every one of his posts.

For the purposes of fairness and accuracy, we at the BWW are correcting our mistake and listing the correct author.
--Norad Bush

Since the Review was posted...

As an update, the comic now has a disclaimer at the bottom stating the following:

UPDATE: The webcomic itself is now gone completely. Which is just as well.