I saw it mentioned in the forum of another webcomic, and it looked intriguing. Not being gay myself, I wanted an inside look at the gay world.

The initially closeted and uncertain Aiden Harris all too suddenly fully accepts his homosexual feelings, and from then on the story collapses into wish-fulfillment.

Aiden Harris is a raccoon attending college who, in a locker room, sees a naked male fox and gets weird feelings. Sitting behind the same fox in class, Aiden gets that feeling again and acts accordingly. But his activities don't stop there. Finally his actions get noticed, but Aiden denies them. Even so, Aiden has suspicion. And one person, a known homosexual, isn't merely suspicious anymore.

But Aiden doesn't stay in the closet for long, and he confesses his feelings to Rodney, who advises him to do this. Not exactly unexpectedly, Aiden reports that Colin reacted unhappily. (Side note: in the last panel, Rodney thinks of getting Aiden for himself. So what does that mean for his tiger boyfriend?) Then Colin hears from Rodney, and he agrees to reconcile with Aiden for the moment.

Ironically, there are two strips added between strip numbers 28 and 29 years after the fact which makes one wonder if they are fill-ins to the main story, or a possible alternative scenario, e.g. "Colin isn't gay after all, look elsewhere for a boyfriend Aiden". It could be interpreted either way.

Learning of what happened, Rick decides to set Colin up with his sister. And things work out happily for Colin, but alas, not so well for Aiden. Oh, but maybe Colin isn't so straight? Perhaps not. 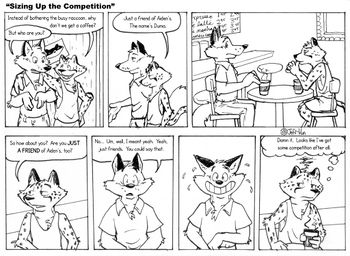 But now someone else has an eye upon Aiden. And it turns out that yes, Colin is definitely gay after all. So now we have a love triangle. But no matter, Aiden chooses Colin, who had first triggered his homosexual feelings. Tough luck, Duma.

This is the main story line; other aspects of the strip will be covered later. As I mentioned, the whole story has turned into wish fulfillment with everything working out too well. Aiden is initially discomfited about his new-found homosexuality, but he owns up to it almost immediately - and everything is fine for him. Aiden suffers no harassment or ostracism. No mention is made of his family or how they might react, nor does the story mention Aiden's past. Did he ever have any homosexual feelings before he saw Colin? He's 19 years old and a college student, and he certainly must have seen other nude males in his life. But the strip never brings that up. Even worse is that Colin abruptly develops previously unknown homosexual proclivities after Aiden kisses him, so all too conveniently, Aiden gets the gay lover he wanted. This would be a lot more credible if there were any signs of Colin having homosexual inclinations even before Aiden had ever laid his eyes upon him. But no backgrounds are given either for Aiden or Colin. At least one is provided for Duma - he came from Africa and was aware of his homosexuality long beforehand.

Line drawings with some crosshatching. The originals are in black and white; most of them have corresponding colorized versions as well.

Unfortunately the art quality actually declines as the webcomic continues, as if the author has lost interest in doing this strip. 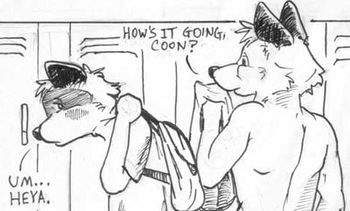 The art from the original strip of 2002 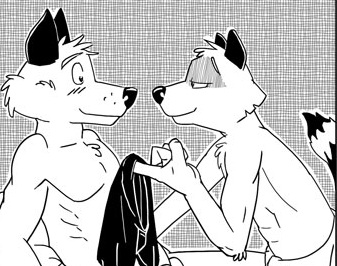 The art from 2011, stiffer and without the shading of before

This is an adult webcomic, and the author gives us plenty of warning about it. Thus, it should hardly be shocking that it includes male nudity. However:

In this case, the male nudity is arguably justifiable because the sight of it makes Aiden start to wonder about his sexuality, which is what this webcomic is about.

But is there any particularly good justification to show anybody's junk here?

And really, do we need to see popping penises?

There is the main story line and comic interludes with characters known as the Cocos (described below). As for the main story line, it does have some mild humor such as Duma chasing a gazelle for lust rather than food, as well as the irony of Aiden getting his towel stolen by Duma long after Aiden had stolen Colin's towel. Unfortunately, there are also strips like [this that may have been intended to be funny but come across as disgusting instead. And then we find yet another character discovering his homosexuality. This whole concept has been repeated once too often. 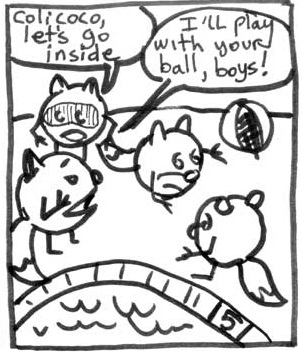 These are strips inserted at intervals into the main strip, and feature versions of the characters done up as pieces of fruit with faces, ears, stick limbs, and tails. Examples: Aidecoco, Colicoco, and Dumaorange. These strips parody the main strips, with jokes like this, this, and my favorite.

This was all I found on him.

This could've been a contender. At the beginning, the title character was just discovering his homosexual proclivities and was confused about them, and in fact denied them. But all of a sudden Aiden Harris simply accepts and publicly admits his homosexuality, and he suffers no consequences. And if that weren't bad enough, Colin, the fox he fell in love with and kissed, just as suddenly finds himself discovering secret homosexual feelings and immediately owning up to them, and falling in love with Aiden. One person discovering previously hidden homosexual feelings is credible enough; it happens in real life. But two people simultaneously doing the same, and conveniently falling deeply in love with each other, is simply too contrived. Suspension of disbelief can only go so far.

And on a big college campus with a large variety of people, the homosexual characters suffer no harassment or ostracism, except for one taunting comic by Rick. As mentioned earlier, there's no mention of anybody's families or non-homosexual friends or how they might react. (In real life, even supposedly liberal-minded people are not always accepting of homosexuality, especially when it's their own offspring.) But though this webcomic is gay-themed, this topic is left uncovered. Not that it is absolutely required that Aiden and Colin have to blurt everything out to their respective families. Even so, the big gay romance in this story is too deus ex machina to be convincing.