I remember that I found this comic in a recommendation list of other webcomics (I don't remember which though), searching for furry comics... When I started reading, I found a somewhat interesting premise; although I am lying if I say that the jokes were funny. The more pages I read, the more insipid and unfunny the strips, until I simply couldn't take it anymore. And there are more that 700 of pages of this thing! Are there anyone who read the entire archive of this work of bland humor? Probably not. Thus, I will do this review to save you the time.

It's hard to say, the comic never was funny, but also the exaggeration of the personalities scale so gradually that is impossible to say where the point of no return is. I will say the downfall is where your patience and boredom tells you to stop.

This comic is about two cartoon animals: Cigarro, a female bunny; and Cerveja, a male Canadian goose. Both of them find each other casually in a bar after years of separation, then from there we follow their day to day and their misadventures, like the time that Cigarro get punched by a squirrel or the time Cigarro use Cerveja like a scapegoat for save herself from the rage of a bear. Believe me when i say that is less funny than it sounds.

Since is a gag-a-day, there not much story, so we gonna talk about the most common characters: 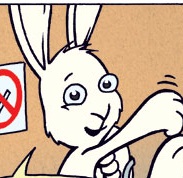 Cigarro "Chikita" Hare: Like the name gives the idea, she is an addicted smoker, to the point that she starts to hallucinate when she quit the vice. She is the asshole and short temped type of character, and she will take any opportunity for punch or abuse the trust of Cerveja. She has a short fuse when the people confuse her gender. Also, she unable to drink coffee without side effects. 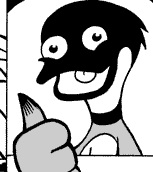 Cerveja: He is an alcoholic, exclusively beer. He's the chill type of character, but also he is a little pervert, rude and sometimes disgusting. He usually is the target for Cigarro's problems. 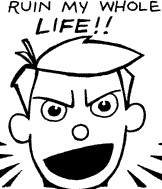 Murray: He Cerveja's puppet that apparently has his own will since he can talk when its used by Galâo or when he is in a pole. He has the personality that is expected in a puppet, aka being rude and loud.

Galâo: A turtle that is Cigarro's BFF replacement when she fights with Cerveja. He is in love with Cigarro (I don't understand why, I mean, did you know her really well? The last person that anyone will choose to have a romantic relationship is Cigarro) and he will do anything for get rid of Cerveja.

Dr. Inteligência: THE MOST INTELIGENT MONKEY OF THE WORLD *Cof cof* Sorry, i need to put an example of his introductions. He only personality is being a "genius", but he doesn't demonstrate it with his actions. He also the type of intelligent character that chases skirts. In my opinion, it's the most annoying character of all.

1) The facial expressions: The author likes to exaggerate the expression a la Looney Tunes, and sometimes it's just looks fucking ugly. But this treatment is not applied to every character, and when I say not every character what I was mean is that its only Cerveja who does not get this treatment. At the start of the comic has some of these type of expressions, but the more you advance in the pages, the less expressive the goose. The image here will illustrate what I mean:

Maybe the author has favorites? Probably.

2) The backgrounds: Most of them are empty or or minimum background objects. The newer ones even have gradient backgrounds that make look like the author is really lazy in that department.

Also, the comic was in black and white with some sporadic colored page, until the October 25, 2012 when it goes full color.

I will be sincere, folks, I said before that this webcomic is a gag-a-day, but I have my doubts in calling this comic that, since it is so unfunny and the characters so unbearable, but the six panel format and it having no plotline indicates that it is. We have this sample for example:

Webkilla says that the third panel is the punchline, with the sinister talking about the cheesecake (not that type of cheesecake, though there's at least one page with that), but I believe that the punchline is the sixth panel, when Cigarro says to Cerveja GTFO. As you can see the comedic timing, if you can even call it that, is all over the fucking place with this thing. Very confusing. Also, Cigarro looks very female, doesn't she?

The "gags" in this webcomic usually divide in five themes: Show Cigarro and Cerveja how much are addicted at their vices; Cigarro being an asshole or stupid; Cigarro hurting Cerveja or vice versa; Cigarro complaining about nobody identifying her as a female; and some comics with the side characters being the protagonists, but believe me when I say that the last one does not make things more interesting or funny.

Finally, I have a question for the author: Why the names of most the characters are Portuguese words? Because I'm pretty sure that you are not from Brazil or Portugal, and I don't conceive why you gave a Portuguese name to a CANADIAN GOOSE.

Let's keep in mind that most of the information presented here comes from the news section of the website, since the website has no about or contact page (or any page in general, the archive of the webcomic is accessed through a tag... Yeah). Anyways, let's continue with the section.

Tony Esteves (Testeves) is a world-class independent cartoonist based in Edmonton, Alberta. His webcomic was originally published in a newspaper of the University of Alberta, The Gateway, and then he decided to publish it online at some point. He is married with a geeky woman. He is the author of the webcomic Legendary Woodsman, it seems what is the superheroes genre. Not much else I can find.

The webcomic started with one update every five days, nowadays the webcomic updates every 17th of the month. Not much lost for me anyways, since the jokes don't work at all. Maybe if the author tries to ask for advice of how to do jokes with someone that know, will probably improve it, but I doubt the author will do it. I'd better end this before I get asleep of boredzzzzzzz...