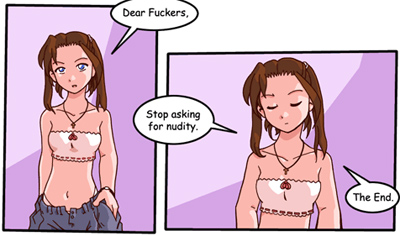 Well maybe if the female characters weren't shallow unloveable fanservice-dolls people would give more of a shit about their personalities, rather than their vaginas.
I want a fucking John Solomon review! Of course, he'd hate the comic too but at least he'd write a review I could enjoy while simultaneously weeping into a massive pillow!

That sentence was written by one Mister Dave Cheung, "artist" of Chugworth Academy, grade A+ in the class of 'acting like a stuck up and smug asshole when clearly in no position to be one'.

Sadly, like most webcomics, lots of things have happened in this comic meaning it's useful to read the entire comic before doing a review. I will admit that I haven't actually read through all 423 or so of the archives of this piece of shit, but I have read through the first 120 or so. This was enough for me to realize that the story sucks. There was shit about being in a movie, there was shit about one of the fanservice girls being on a children's television show and getting felt up by the guy in the dinosaur suit. There was more shit about an Asian guy's dong, shit about politics, and the like. Because of all this evidence to the shittiness of the plot and story, I'm going to just say "story's shit" because everything I've seen in it to date is blatantly unfunny, tasteless and stupid and I'll leave it at that. 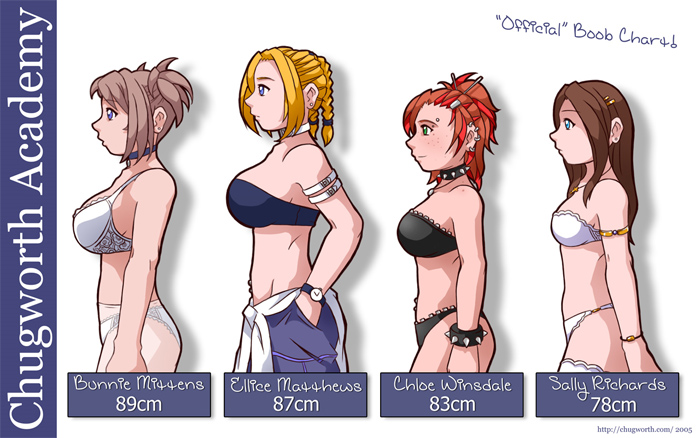 There's not one fucking thing about Chugworth Academy that makes it worth reading. It's stupid, juvenile, poorly drawn, animu, and above all else bullshit. It's juvenile, disgusting, unfunny, vulgar, and perverted. Not to mention the fact that its author shamelessly exploits his own fucking characters and seems completely oblivious to the fact that his horrid drawing style completely negates any kind of sexuality or eroticism they might convey. Somehow he still has legions of morons hitting up for drawing the main characters naked, but considering that comics like The Wotch have the same sorts of fans, it doesn't mean a damned thing. In short, this comic always sucked something powerful.

There's one question I want answered with regards to the early (and by early I mean at least the first three-hundred strips) art in Chugworth Academy. That question, of course, is "What is wrong with David Cheung?" Were you molested as a child by a man with no nose and animu eyes or what? Did your mother not have a nose, Cheung? Did she hate Asians? Were you molested by a furry? 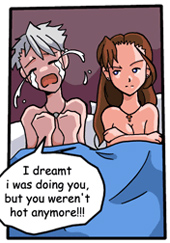 What's really obnoxious about Dave Cheung's work is that it's actually not as bad in some places as most other anime-fetish comics, but Cheung still manages to fuck it up. Here, we find one of Cheung's characters in profile, with no snoutface. He even has the outline of lips in his silhouette. Yet somehow he still winds up with his mouthhole on his cheek. Why? It doesn't even fucking make sense. It's absolutely abhorrent. It's ridiculous, it's bizarre, it's a whole ton of other adjectives that I can't even articulate because I'm so stunned at the pure shitheadedness of this abject failure of an artist.

Even though they have noses in their profiles, they don't have noses at any other angle. WHY? What the hell negates this simple detail from existing in your comic, Cheung?!

By comic #43, the mouth has been placed in the front of the characters' mouths where God intended it to be, yet the characters still have no noses when you look at them from the front.

It isn't until much later in the comic that we begin to see some half decent drawing. The characters develop noses. Although it must be noted that even as late as strip three hundred and one they kind of disappear and reappear, like every character has a Cheshire Cat strapped to the middle of his or her face.

Comic three hundred and three makes me laugh for all the wrong reasons. Here we have a young lass wearing little more than a tiny black strapless brassiere betwixt her upper areas and a few armbands and a necklace - criticising an emo for his "terrible" dress. Meanwhile the breasts - which are basically the focus of this entire comic - are drawn badly, as is the bra. What's between the cups? Does the little connecting strap between the bra cups just kind of work its way in between the woman's breasts or did she have to wedge it in there before she left the house? How does it stay there? Is the bra capable of defying gravity, or is there a reason why her breasts look so completely unnatural?

Basically, while I will admit that there are some good points to the art in Chugworth - and it's definitely not the worst I've seen writing for this site - the flub-dubs, like truly bizarre looking breasts, temporary nasal invisibility, and let us not forget the horror of the scenes the art is depicting are so irritating that I just can't give this thing any better than a mediocre rating.

Oh, but wait, even Fischbach's beginning to recognize his inner pervert and just post the fucking drawings (and by that, I mean they're literally drawings of fucking). So again, you suck. Hard. There, giggle a little at that double entendre. After all, all I or any critics are here to do is entertain you, right Cheung?

Then there's the lead male character's massive horse cock. Working by the racial stereotyping that Cheung sticks with like piss to a toilet seat, not to mention his freckled character's hatred of WHITE America and all the other racial themes he includes in his comic, the lead character's Asian penis should be a half-inch, at largest. Somehow he clocks in with a foot long. It doesn't even make sense. If you're going for racism, why not be consistent? 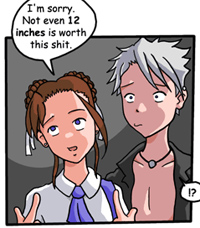 Well-characterised writing from a man who has clearly never touched an actual woman.

"This used to be a Gay Flash animation, but I got rid of it because it was crap." Smug words for a man whose art barely reaches above the level of an eight-year old.

In my opinion you, Mr. Cheung, are not just a pompous, arrogant asshole, a terrible artist, a brainless writer, and a creepy pervert, but a coward. If I was in your position I would probably refuse to acknowledge just how shitty I really was, because if I was you and I did, I would likely be unable to take the full force of guilt and sadness without killing myself. You laugh off people like Lilith Esther, as if you're taste testing people's opinions and they're just not vitriolic and entertaining enough for you, as you stroke your ego and revel in how super-cool you are for looking at your critics and laughing at them until spittle covers their faces.

So I don't give a shit about you or your horrible comic, because I know that there's not a thing I could say that could ever get your head out of your own ass. However, for all those questioning whether Lilith Esther's review was enough, it really wasn't. No one review can cover how truly abhorrent this horrible comic is. It's perverted, it's arrogant, it's shit. It is a bad webcomic. It may well be the worst ever made.

Other comics by this person that are reviewed on this site