Children of the Night

Like most internet-based masochists, I was perusing the dankest corners of the internet when I saw an individual who drew fanart for her favorite comics. Her favorites included the infamous dubious-consent sex of Starfighter, and the brightly colored sexual slavery desus of Teahouse. What caught my eye was that the third fanart was to a comic I had not seen before. I had this feeling, deep down in my bones, that if those poor excuses for internet entertainment were their favorites, this unknown comic would also be a treat to my crappy comic obsession.

I may not always be right, but in this case I was VERY, VERY right.

I would say the downfall would be when we're introduced to the first one of the boys forever in love with Mary Sue.

As a vampire, is he a mysterious figure watching her from the shadows? No.

Is she grabbed by a group of ruffians and Vampire boy, seeing a damsel in distress, comes to her aid? No.

Do they bump in to each other at the dry goods store? No.

We see his ass before his face... in church.

My goodness, didn't your mother ever tell you not to "present" like that? Especially in a place of worship! Let's toss aside the fact that vampires have historically been unholy creatures which can be harmed by Christian objects, why are you in this less-than dignified position?

"Because my sins are SO GREAT that merely kneeling for forgiveness is not enough."

Meanwhile, her husband-to-be admits that he was only mean to her because he didn't want to get married, just like her! "Oh my God! You have melted my cold, icy exterior with your temper tantrums and bitter insults, and now I want to get married to you, rage girl! Oh no! Now that you've admitted you're just a tsundre, I'm in love with you too!"

"Oh, I'm caught between two hunky, mysterious men! What to do!?" It's uttery eye-roll worthy from beginning to end.

What's good here? In works of fiction, vampires typically form a super-powerful organization, but in this story, they are at the beck and call of a "hunter" organization that uses them to dispose of criminals who the vampires use for sustenance. Neat premise! However, it falls flat when you ask, "wait, there's supposed to be one thousand or so vampires in London alone! How do they keep that many vampires alive on solely wrong-doers?" and "why can't the hunters just kill the criminals themselves? Why risk keeping a blood-thirsty race of super beings alive just for this?" Hopefully, these will be answered with reasonable explanations, but this story's focus is the romance, so I will not be holding my breath. 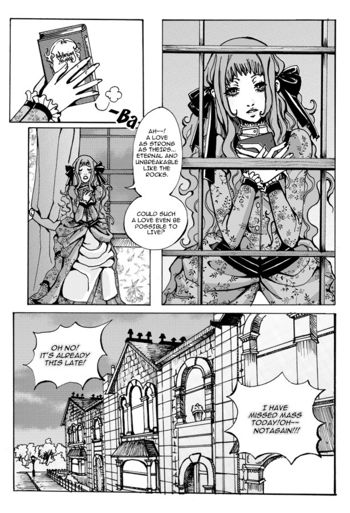 Impressive at first glance, but...

It's not bad, but it is lacking. It seems as if the artist learned how to polish up a comic to make it look professional long before learning a lot of artistic basics, like expressions and anatomy. She has improved a good amount since her beginning, but it feels to me like she's improved more in superficial fancy aspects rather than the basics she needs. She puts a lot of detail in the hair and clothing, which can be quite lovely. The problem is that what could really use her help are the hands, legs, perspectives, and same-chin syndrome. They only get some effort throughout.

She uses the ever annoying, filtered photographs for backgrounds on occasion, and it's painfully obvious when she reuses backgrounds. She has reused the same library background picture one, two, three, four, five times.

To an untrained eye, I'm sure the art is astounding, but once you take a deeper look, it starts to fall apart. But hey, at least it looks like she's trying... some of the time.

Elizabeth: She's born into a life of opulence with few responsibilities. To be honest, most of the time, it looks like she does pretty much whatever she wants. Even stuff that's disallowed for her safety, like going out unattended at night (fairly reasonable if you ask me). She has to break the rules and, of course, she's so great that people help her get away with it left and right. When she encounters any problems, her response is to throw a temper tantrum. It's hard to sympathize with a character's struggle if their response to a problem is that of a five-year-old, especially when they're not five years old. She's also incredibly selfish. Forcing others to cover her tracks while she does what she wants and storming out on her precious vampire because he DARES to imply that he still loves his passed-on wife.

I will concede that despite being an obvious wish fulfillment character, she has a personality of her own. She's not some blank slate that any reader can slide into the role to vicariously swoon about how these tragic bishies love them. Then again, her personality—which removes her from the obvious pander list—is of a spoiled toddler. It's like instead of being torn apart by a pack of wild dogs, you're getting torn apart by one wild dog. Not that much of an improvement if you ask me. 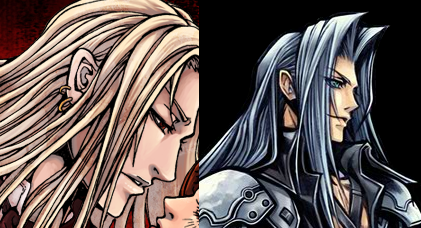 Lawrence: He's just so motherfucking sensitive. He nearly kills himself on a regular basis because he doesn't want to drink blood, even though he's only allowed to drink blood from convicted criminals slated for execution anyway. Mary Sue is so motherfucking special to him that he's risking execution for himself and OTHERS just to be by her side! Let's recap: one serial killer's death is pages of bawww, but possibly killing yourself and thousands of others of your own kind is worth it, 'cause talking to someone who's ~innocent~ is swell.

Kenneth: He's a dark, probably tragic mysterious man covered in scars. At first, when they met, he says he's only using her for her money and sex. Later, he claims he only said that because he wanted to convince her to call off the marriage by playing ~mean~. Yet, when they first met, she says she doesn't like this forced marriage thing and asks him out front how he feels about it. He could have easily said, “yes, I agree. let's try to call off this marriage,” but instead, he just goes full out creepy. For a while, he tries to get along with her, but it usually just ends with her throwing a tantrum and storming out the room. Yet her childish behavior only seems to make him want her more until he confesses he DOES want to get married to her after all. DUN DUN DUN!