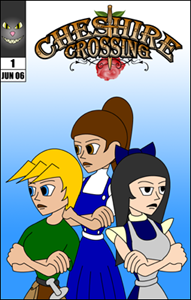 Crossover stories have been done in comics since the dawn of time. Wonder Woman stars with Batman who's playing hopscotch with Superman and blah, blah, blah. Everybody loves to see characters from different worlds interact with one another (or in superheroes' cases, they're often in the same world, so they don't necessarily have to break the laws of physics to meet up). As a result, this trend has made its way to the user-created webcomic world, and has been met with mixed results. Crossovers of characters from print fiction in webcomics usually don't go over as badly as character crossovers from webcomic to webcomic, but, as with anything, quality always varies on a case-by-case basis.

What we have here is a crossover of characters from three famous Victorian-era works of literature: Alice in Wonderland, The Wonderful Wizard of Oz, and Peter Pan (four, if you count the Mary Poppins books). For those of you who were ever terribly curious what would happen if Alice, Dorothy, and Wendy all converged in a looney bin to swap worlds and sharp words, enter Cheshire Crossing.

This story begins many years after the ladies' adventures in their respective stories. In Cheshire Crossing, we begin with the three main characters from the three Victorian classics, Alice of Alice in Wonderland, Dorothy of The Wonderful Wizard of Oz, and Wendy of Peter Pan, all meeting in a mental asylum. Apparently, after having these adventures, these three women were subject to scrutiny by society with their wild stories of venturing to fantasy lands. They were all branded crazy and put through a string of asylums until adulthood. In this new institution, Cheshire Crossing, the girls are all brought together for their fantastic stories, except there is one difference between this place and their previous asylums: the headmaster believes their stories and believes they are not crazy. They really do have magical powers.

Years of the girls' torture are vindicated as their powers to cross to these magic lands are validated, but things swiftly go awry when Alice steals Dorothy's magic slippers and teleports to Oz.

The concept may seem a bit cheesy, with the crossover element and all, but I thought it actually wasn't bad. I admit I was genuinely intrigued by it once I got into it. Exploration of these the three classic characters classics after respective their adventures seemed interesting because we always see these characters in these stories and assume everything is "happily ever after" upon conclusion. So, it was interesting to see a story explore how things don't always work out the way they should for these characters.

Mary Poppins also comes to the party as the three girls' nanny and tutor. At first, the concept of a bunch of grown women needing a nanny doesn't make a lot of sense, but Weir throws in the tutor thing to smooth things over. It's assumed that since these girls never got proper educations in their previous asylums, they require further schooling. Okay, I'll bite.

As these characters worlds converge and interact through the girls' misadventures, we do get to see the majority of the major characters from the stories, such as Peter Pan, Captain Hook and his crew, Tinkerbell, the Wicked Witch of the West, Glinda the Good Witch, the Mad Hatter, and even the Queen of Hearts show up in the finale. It's the Kingdom Hearts of Victorian literature (except with less emo bitching and moaning).

Sadly, the downfall of this webcomic is page one. The artwork is God awful and in over 100 pages doesn't improve one iota. 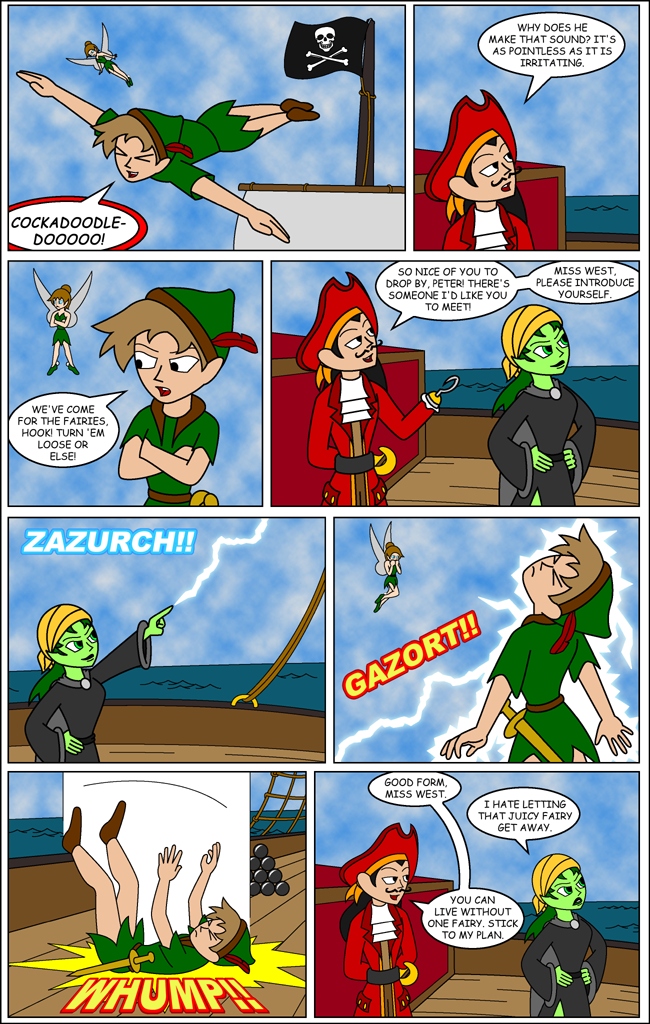 The art of Cheshire Crossing is quite easily its greatest shortcoming. Weir has the drawing abilities of a fifth grader who's seen way too many episodes of Yu-gi-Oh!. Every single human character in this thing looks like a dead anime doll, which is horrible and creepy. His knowledge of anatomy, specifically female anatomy is laughable. This is not to say that he knows how to draw men very well. No, no. All the men in this comic look like ten-year-old boys. Even when Peter Pan accidentally grows up after eating some berries in Wonderland, he still looks like a kid. What's most infuriating about all this is that this guy has been drawing comics since at least 2001. As of the last update in Cheshire Crossing, that was seven years earlier. How the fuck is he this bad after seven years? Does Mookie know someone's beating him in the stagnation department? Stagnate harder, Mookie! You can do it!

The art is so wretched and stiff that any attempt at action is dulled by its incompetence. All attempts at drama are also marred by this terrible "doll" look. In fact, no meaningful plot point can come across as anything but "dead doll in motion" because of this wretched, wretched styling.

So how does Weir do it? How the hell does he draw comics for the better part of a decade and not get better? Simple. He copies and pastes. That's right, we have a man after Tim Buckley's own heart with copy-paste bullshit to substitute for art. A word of advice, Weir. You know that copy-paste thing you do to save time on drawing comics? Fucking stop it. NOW. I know the process for learning how to draw people is painful, but if you do it over and over again you'll learn to get better.

Okay, no he won't. He hasn't. He won't. My next recommendation then is for Weir to fire himself as artist of anything ever. Immediately.

Even though the art is a terrible swamp of suffering, I made my way through the story anyway and found that the writing is…actually kind of good. 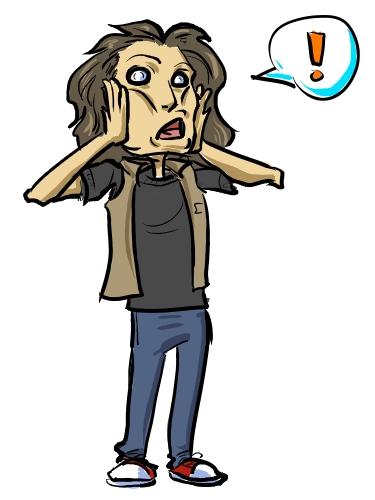 I know, I'm just as shocked as you are.

I liked the story. There. I fucking said it. Dead dolls be damned, I liked this story because the concept was interesting and the story was compelling. As I read on, I genuinely wanted to know what happened next and was pleasantly surprised to find this comic comes to a somewhat satisfying conclusion. The material ends with a decent enough resolution to the current storyline, but leaves the ending somewhat open for further stories later down the road. My, God, Weir you fucking did something right.

The dialogue has its highs and its lows. Weir does make some stupid decisions. Also, the Wicked Witch of the West swears like a sailor. I get the idea that Weir is trying to hard to make her a "bad" character and all the profanity just comes across as forced. To hear a character from a whimsical children's story profane up a storm is tasteless and unnecessary. It doesn't fit the source material, therefore does not belong here. A better writer knows that a character doesn't have to say bad things in order to be a truly evil character. Deeds make a character evil, not words. That said, Weir actually does make good use of the source material by having characters recall some of the books' more famous quotes here and there. I thought it was a nice touch.

The character development here was also not half bad. Hell, the fact that I'm seeing a series of women in a webcomic who are actually more than fan service is refreshing enough. Alice is a bitter, broken soul but not without her merits. Dorothy is a thinker and a strategist. Wendy also assumes a strong female fighter role. Yeah, there's some fan service here and there, but it's so badly drawn no one could possibly take it seriously. In the end, I found myself liking Alice best, because she's dark and saucy and like her style. Yes, that last one there? That was a competent masturbation joke. Good job, Weir, on not fucking that one up as well.

I don't hate the writing. I found myself actually closing my eyes and picturing better art to go with the writing and I found that the story actually works. Let's give it a try… 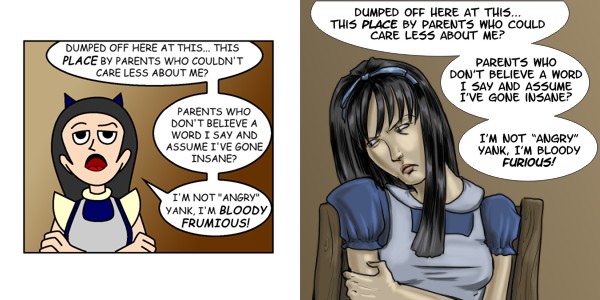 Alice before the Norad treatment. And after!

Andy Weir is a guy who's pretty convinced he's a cartoonist, as evidenced by his other work in Casey and Andy. Unfortunately, he sucks tremendously at the cartooning part of making comics. He even claims himself to be the World's laziest cartoonist, but I have to disagree on that one. Weir is an incompetent cartoonist, not a lazy one. There's a difference. While Weir does a lot of copy-paste action and nominal drawing ability, what he does is still more work than, say, stick figures. By that logic, the dubious honor of world's laziest cartoonist would have to go to Randall Munroe of XKCD infamy. (Fuck you, Randall Munroe.)

Apparently Andy Weir found far more success in sci-fi literature than in webcomics, after he penned a short story titled The Egg, which gained him a new audience. Then he wrote a full-length novel. Which later became a Hollywood film starring Matt Damon. (In case you don't believe he's the same guy, this AMA seems to confirm he wrote both Cheshire Crossing and The Martian.) I guess he learned from his past experiences and played to his strengths in writing, dropping all pretenses of being a cartoonist. Good for him.

The writing is okay. The art is awful. It has been said that good writing can save bad art, and while I don't think the writing quite saves the art, I think it redeems this comic somewhat. Unfortunately, this comic is a victim of its creator's arrogance and laziness. If Weir only had the wherewithal to know the quality of the story he had, I doubt he would have handled it so poorly. Instead, he wrote janky dialogue and cut corners on artwork he was never fit to draw in the first place. If this comic were in more capable hands, this might have actually been a good webcomic.