Scotty is beyond the age when this is considered cute instead of sketchy. After all, you usually don't have a girlfriend at 12 years of age. Guess how old he is. The answer will be revealed in the author section. No cheating!

Oh there never was a bright star in the sky for Cherri Blossoms. It started out making no sense, and continued making no sense unless you read through the copious amounts of hand-written text in the smudgy-ass pages later on. I mean, I have bad handwriting, but Jesus Christ.

Keep in mind, I only was able the discern the fucking plot because it was written for me on the bio page. Don't try to read the comic for a plot, you won't find it.

Here's the plot: Scotty the self-insertion (I'm sorry, it's just the biggest flaw in this comic. It's so glaring it's hard to ignore. I promise I won't bring it up again) has a magical pencil that brings his drawing of his perfect catgirl to life. Then they go on zany adventures in which Scotty becomes a super hero named Star and saves his patently retarded mistress from the villains who have no motivation other than the fact they want the magic pencil. And that's where the story ends for now.

There isn't an ounce of originality in this comic. It's just pure wish fulfillment. This would be fine if he just drew it, jerked off to it, and then put it under his pillow or something, but on the internet he just takes a number and waits in line with the rest of the Mary Sues. 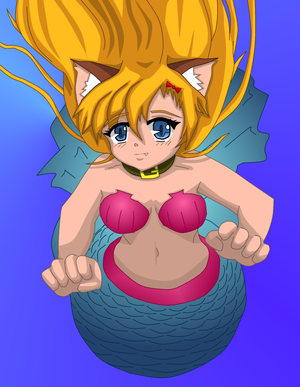 One of the only traces left of the comic that is on the artist's DA page that wasn't deleted from the (now gone) site... Just look at it.

It starts off as pixely MSPaint shit that makes full use of the default colors and then in page 3 it takes a turn for the worse. Yes, there is worse than MSPaint.

Pencil in comics is one of my pet peeves. I've seen it done nicely before, but this is just an abomination. Pencil makes your comic look rushed and unfinished, case in point here.

The style isn't much better. It's cookie-cutter animu complete with shitty anatomy and kawaii animu expressions. The one redeemable thing I found is that they don't do snouts like the really bad anime artists do.

Before I move on, LOOK AT THESE BREASTS. In the fourth panel, it looks like a fucking grapefruit glued to her chest and in the fifth it looks like she has a serious case of ass-chest going on. This is just cementing the fact that this man has never seen breasts before in his life.

If we're talking about handwriting, this is the girliest handwriting I've ever seen. And this is coming from a girl who passed notes in class in fourth grade. Oh, you mean the dialogue. Let's tear this bitch up.

First, there's a difference between exposition, infodump, and stupid. Guess which category this falls under? "I'm Nikki. Scotty's best friend." WHAT. And the self-insertion! (FUCK. I'M SORRY.) I mean Scotty couldn't introduce this character WHY?

The writing in this is so cheesy I can use it to make manicotti. And then have enough left to make some lasagna and invite my greasy relatives over for dinner. It's also extremely cluttered, contorted, and squished.

Let that sink in for a bit.

I originally thought he was 15, 16, 17 at the oldest. He has a bad habit of throwing tantrums like one and has disillusioned himself into thinking he's good enough to be hired. I got over that thinking when I was 17.

Manga artists get shit pay in proportion to the hours they work. And success isn't guaranteed.

Scott Lawson is Peter Pan, frozen in time. Not in body, but in mind. His actions and behavior all point to a teenage girl, not a grown man. There was never potential for this webcomic, and there's no way he'll see this webcomic to the end. I bet you dollars to donuts he'll throw a bitchfit when he finds this.

And I'll be laughing over here, dunno about you guys though.