As you can see from the summary I could actually stop my review here, because CnC isn't different than Better Days, Las Lindas and TwoKinds. It's one of these furry comics that spring up like mushrooms and get tons of links from other furry site. I followed one of them…

We start with our main protagonist Josephine "Jo" Rodgers, Jabarchive's resident mascot, coming home from college to become co-owner of a camera/photo/whatever shop, owned by the main main protagonist (because shameless self-insertion) James La… um, I mean "Di Benedetto", for… some reason. She's immediately welcomed by his sleazy smile and third main character Sarina "Sari" Doyle, who's archetype is called by us experts "fuckbait". That's right, we have here a catgirl-thing having sex... WHO'S UNDER AGE! Can you say pedophilia, Jimmy?

After this charming fuckfest we're introduced to more characters - a human (?!) and an angry, bitchy, stout raccoon woman, who at first has a ridiculously cliched "attack" and then normal animu eyes. Next is a… bat? Chihuahua? Anyway, this whiny thing has issues. Because it can't fuck the human. BWAH, SOBSOB.

And that's it. There isn't much more story aside from that as of this writing, current storyline about Jo getting the staff into a paintball match because Jimmy did a lousy job in terms of teamwork. Yep, Cheetah's self-insertion is incompetent. Maybe he should consult some psychologists regarding self-esteem issues, just saying.

Literally the third page of the comic

Definitely CnC's (only) strength. The art is decent for a webcomic, the characters facial expressions reflect more than just two emotions and the backgrounds are quite detailed at most times. But Kyrie's talent is often wasted on pin-ups, shitty fillers and cheesecake.

Later the artist was replaced when Val had to retire due to health issues and James Hardiman came in her places and the art remained mostly the same. I think he was the one who started using color and surprisingly (considering his reputation of being difficult) was able to use the same art style as V. (maybe slightly more detailed even) and keep the comic consistent. The content, however, remained the same. 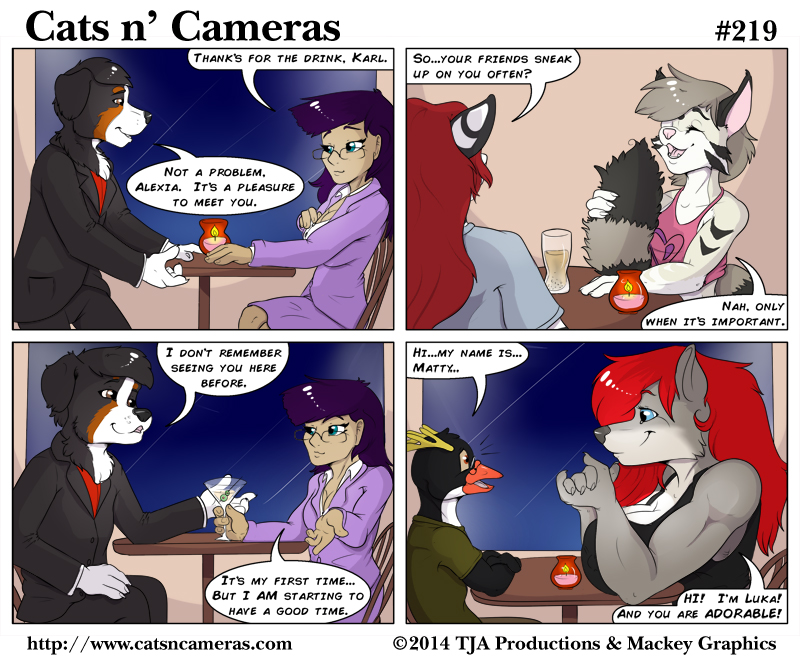 Since the review was written, color has been added to the art, and there are more stretches without sex scenes in them. Although that's a lot like a hospital saying they reduced the mortality rate from 90% to 80% and put up some nice new curtains.

Let's take a closer look at the characters. The three leads are Jimmy, a giant dick with a giant dick who is probably some kind of fantasy stand-in for La Bella (after all, he calls himself "Cheetah" which is what Jimmy is), Jo and Sari. The latter two simultaneously being the former's duel lovers.

Both girls are little more than dick receptacles, but Sari excels at being oversexualized. This results in fanservice en masse. To defend her state as alpha fuckbait the writer not only strives for her to have as many pantyshots as possible, but also has her volunteers to join Jo in riding Jimmy like a rodeo. Sure, Jimmy's an incompetent sleazebag, but five hours make him a MANLY man, right?

Aside from giving furries fap material CnC's writing fails at their other goal. You know, being funny. Lame double entendres are its prevalent… no, its sole source for non-existing laughs. Hell, to prove me wrong point pick any strip so far.

Apart from his comic Cheetah seems to be a nice guy. All I can say is that his comic is shit and that he has been running and maintaining a personal furry porn site for close to 20 years which is beyond sad. Same can be said for Val who worked on the comic for a few years until some sort of problem with her wrist made her quit (did it really? She never actually stopped making art) leading to her being replaced by James M. Hardiman. All three of them are a product of the 90's furry community so it's no wonder they ended up working together, but it's only the last of the group who is a real drama superstar.

Hardiman has been making furry smut since the early 90's and has in past years fallen out of favor with his own community when, being displeased with what the fandom has turned into, he began making comics lashing out at them. In turn, everyone who had thus far been turning a blind eye to the obvious flaws in his art for the sake of civility began pointing out the fact that all he draws is the same, disgusting skunk girl in the same three poses and all his art looks like it has been colored in with sharpies. As a result James continued his slapfight by doing things like killing off his own characters just to piss people off and being an all around douche.

Not that any of his criticism was unjust. He pointed out how half the furries now have some gross fetish (besides being furries), that everyone now believes being a furry makes them automatically gay (for this he was branded a homophobe) and pointed out that "cubs" are pedophilia. However, here he ran into a problem because one of his "friends" used to draw a lot of creepy, furry child-porn. You may have notices that I put the word "Friend" in quotation marks and that is because, according to people, his "friend" was actually just him using an alias. Yes, taking a page from the Eric W. Schwartz and Tom Preston playbook, James allegedly posted his grossest porn under a fake identity. James denies this and says this person was his friend, but this girl's conspicuous lack of activity online and her art style which is identical to that of James leads people to believe this is untrue.

So I guess drawing underage girls for CnC is nothing new to him.

As I implied in the summary, there must be some sort of circulating template on the internet where everyone can add furs and animal heads to pre-existing tits in each panel. It must also have some kind of instructions on it like "Avoid any realistic or in any way non-sexual speech and behavior at all costs!!!1oneeleven".

Despite the allegations listed above, Hardiman had hardly been arguing with anybody in the SkunkworksAMA Yahoo! group-and he did regularly post both art and messages on it. Admittedly with Hardiman (and Yahoo! groups) now deceased, it seems that Desiree Lee was merely Hardiman's alter ego after all. In any case, Jim Hardiman's mother has been a longtime supporter of her son's artwork, even appearing at conventions with him. And Hardiman had indicated that his day job was in making regular, non-pornographic commercial art, and did not want to let his commercial customers know about his skunk girls.