I first learned about this comic via TVTropes, which has a whole page dedicated to it. I decided to take a look at the comic itself and...by gosh, is it cringeworthy.

Artwise? Probably the second strip, 'cuz even when the author's drawing actual cats, they look like furries. (Though at least he's/she's improved at that.) Storywise? That would be the fourth strip.

Cat Nine is a story about a guy named Keith, who comes home from work one day (or maybe college...I don't know if it's ever specified what his actual age is), when he sees that his cat, Myan, has become a human girl. And yes, that's about as cringeworthy as it sounds. I mean, he doesn't even know it's his cat when he comes home and he barely reacts at all. Mother of Josh. So it's no wonder when his...girlfriend (I'm assuming), Tammy, comes home and sees him with his former cat, she freaks. Of course, Myan, for whatever reason, goes up to Tammy and licks her, causing her to faint from shock. And, honestly, how could you blame her?

Some random nude woman with cat ears and tail, already seemingly banging your date, then she comes up to you and licks you?! You'd better run, the guy's hosting Yiff-Con this year!

If you read the summary I gave, then you probably saw what I mentioned about the plot. That is, that this plot has already been done. Of course, there are also many other plots that have been done and then re-used that ended up working fantastically because they added so many new elements to the pot.

For example, all of those stories about princesses and them having to go on some sort of journey or quest to find their true love. It's been done over and over, yet we still see some really good stuff come out of this plot even to this day. Why? Because there are still constantly things being added to this plot that make it new and fresh, and something fun to watch as it unravels in an epic/dramatic/comedic/etc way.

Cat Nine adds literally nothing new to the pot that isn't incredibly awkward, cringeworthy, or just plain fucking creepy. In fact, take a look at this spin-off of Cat Nine, called Kittens:

Holy crap. You know your webcomic is bad when a spin-off as tired and old as this is better than the actual webcomic.

The fact that it is just as old and tired a premise as (if not more so than) Cat Nine itself, yet it's actually better than Cat Nine.

But why? Why would it be better if it's still a tired premise with cardboard characters?

Answer: Because the vibe of this spin-off is nowhere nearly as awkward, strange, or creepy as the actual comic itself.

Yeah, I think I've ranted long enough about this horrible excuse for a story. To put this into a single sentence: The story is an overdone plot with nothing new or interesting given to it that isn't remotely creepy or awkward.

Wolf is not good at drawing manga.

That's honestly pretty much all I have to say on this matter.

Now I'm not saying that they're completely hopeless as an artist. They do show some promise with their character design and all, and I've seen from the creator's DeviantArt that they actually do have the potential to be a genuinely good artist. So what's the matter? WOLF THEMSELF ADMITTED MULTIPLE TIMES THAT THEY WERE BEING LAZY DRAWING THE COMIC. Just...what the fuck?! Why would you even bother to draw the comic if you're literally going to tell everyone that it's lazy, cheap, and uninspired? Why?!?

And what's worse is that some of the comics are animated with Flash! And I'm not saying that Wolf is awful at animating (this comic was their first animation on the site) or anything. In fact, this comic is technically one of the first ever webcomics to utilize Flash animation in certain comics (Homestuck did the same thing not long afterwards). So what exactly is the problem with the animation? Well, in order to call it animation, it technically has to be animated.

The thing is, most of the Flash on the site are just groups of comic panels put together with transitions and effects added to make them look "animated". And the voicing in some of them is also pretty crappy, but I won't get into that right now.

So the art is clearly trying to go for that whole Eastern vibe, with its obvious manga-ripoff character designs and its method of using manga-like sound effects...but the problem is that the art looks nothing like actual manga! There's barely any shading, awkward coloring, props and settings far more reminiscent of a Western area than an Eastern one, and they clearly just shoehorned in a catgirl so that they could go "HEY! This is some REAL Asian stuff here! Totally not joking or anything!"

Just because you have a catgirl in your webcomic does NOT MAKE IT MANGA.

When will these people ever learn? 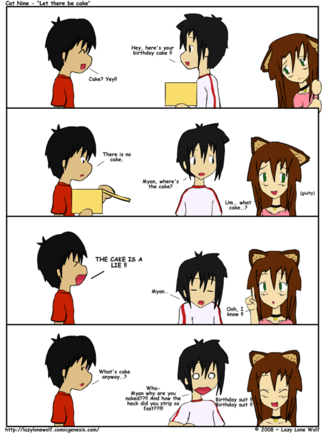 Yeah, Wolf. That's some real funny shit right there. Not like any of those jokes you made are memes that have been dead since the last Ice Age went by. (Oh wait...this is 2008, isn't it?)

Let me be clear here.

What was funny from 2008-2012 is not necessarily funny nowadays. Of course, this is why any work that continuously pops jokes at pop culture and references modern memes typically becomes dated and forgotten within a couple of years (unless it's still going by then). A good example is that 2003 Cat in the Hat movie. Honestly, how many of us remember that cinematic piece of crap? Not many of us, huh?

Well, the same thing goes for old memes like "The cake is a lie!" or "Peanut butter jelly time". They may have been funny then, but unless they could somehow be timeless jokes that never grew old or outdated (which, with memes, is pretty much nonexistent), then they will lose their popularity, and whatever you created to be funny then will just be old news nowadays. With the internet, society is evolving far quicker than ever before, and humanity doesn't give a fuck about someone trying to be "hip" and "popular". If you just go with your own sense of humor and your own jokes, no matter how twisted or perverted they may be, they will at least be yours and they will be unique.

And if it weren't for people being creative and unique, we wouldn't even have the "popular" memes anyway.

How DARE anyone call these flat, two-dimensional shitmongers CHARACTERS!!!

Look at this comic! Tammy has just walked in on what looks like a sexual act between a random naked woman and Keith! She has the obvious reaction; panic, followed by anger. Understandable, right? Seems like something that an actual human being would do, right? Well guess what? Just a few comic strips later, after Tammy has passed out and come to again, without ever properly meeting Myan or having any actual reason to believe Keith's story that she was once his cat (because why the fuck would a rational human being believe that story)...SHE'S ACTUALLY BECOME FRIENDS WITH MYAN AND IS TOTALLY WILLING TO BELIEVE THAT KEITH IS TELLING THE TRUTH.

There is no character development. Absolutely none. And the characters never once make a rational or believable decision!

In fact, in that cake comic to the right, guess what?! The male character on the left wasn't even there before!! What the hell?! They just threw him in out of nowhere, in what is supposed to be a story-based story, and expected people not to notice that this dude has literally never been in the comic prior to his appearance here! By Josh! That's such a lame way to add characters, that it makes my handicapped grandma look like a fricking ballet dancer by comparison! Just...wow!

And Myan! She's supposed to be a cat/human hybrid, but her behavior is far more symbolic of a canine than a feline, right down to the fact that she's licking other people! Seriously?!

Honestly, there is so, so much I could rant about with the characters. The only problem is, there aren't enough hours in the day to do that! So unfortunately, I'm not going to be able to nitpick every single think I hate about these characters! All I can say is that they suck, they're stupid, they have no reason to exist, and this webcomic is pure evil!!!

Sorry if I'm melting down a little. I just hate everything about these so-called "characters".

The author, Lazylonewolf, has claimed he/she isn't an actual furry. Judging by their Twitter and their DA, there's no way that this is, in any way, telling the truth. And honestly, other than that, there's really nowhere nearly enough info for me to find that can tell me anything about this person. Honestly, I'm not 100% certain that Wolf is a human being.

Quick Thoughts on the Reboot

This is still Cat Nine, right? This doesn't seem to have anything to do with the comic, based on its first few strips...well, whatever the hell this is, it looks pornographic.

So I read the first 33 pages of the comic's reboot, and to be honest...it is sort of an improvement over the original. The author has finally learned how to actually draw cats (as well as improvement of the art in general), the story has a little more twist to it, and the characters have definitely improved (though that's not much of a compliment considering how bad the characters originally were). However, to shake things up a bit, I decided to read the latest 10 strips as well.

They seemingly have nothing to do with the original story, which was about a cat that had the ability to become human. Instead, they seem to be about some sort of race of warriors and there's a fairy and an omnipresent being in there and yeah, it's basically nothing like the original strip as far as I can tell.

While I don't necessarily recommend the reboot, since it's still got a lot of that cringe and stupidity to it, I certainly far recommend it over the abomination that was Cat Nine (2008-2012).

This comic is lazy, predictable, cheap, dull, and perhaps even a little offensive with the absolute stupidity of its so-called "characters". Now the truth is, so far, I've only read the beginning of this comic. Literally. So perhaps there is less awfulness from this comic than I give it credit for. Maybe the later issues are actually worth taking a look at. I don't know.

All I know is that when this comic started, it stank like rotten eggs. And any comic that makes a bad first impression is (with a few exceptions) one that doesn't improve much, either.