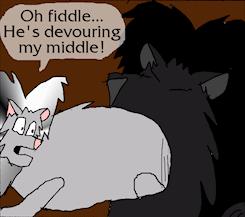 Among the reasons that Furs are sometimes hated for is the subject of vorarephilia, or Vore for short. To define "Vore" it is a sexual fetish that involves arousal from the idea of being eaten or by the process of eating. There are several kinds of Vore scenarios but they commonly fall upon two subjects: Soft Vore which is being swallowed whole, and Hard Vore which means tearing the prey apart and eating it piece by piece. Its no doubt a very disturbing fetish that can scare the uninitiated away.

However, there are plenty of people out there who draw stuff like this and get cult followings. This helps due to a combination of well crafted artwork, basic yet plausible vore scenarios and characters, be they predator or prey, that are unique to each artist. All this and little extras such as subtle humor and backstories of the characters and the places they live in to create a more interesting world would create a significant amount of traffic and fans. You would think that its impossible to screw up this formula, but its actually very much possible to screw it up and create something that fails on every level its trying to advertise itself as even a vore comic and that's what Carnivores is.

The comic's first page gives an example of what's to come: What we see is a small kid introducing Carnivores before getting mauled and eaten by a Tiger, a Wolf and a Lion. They then tell Santa to put them on their naughty list. That is a sign of things to come with this comic.

Carnivores has about 18 story arcs. None of them are really organized resulting in certain story arcs that are connected with each other in any way will in much further in the comic then they should be. Each one of them is summed up in these sentences:

The First one is a group of animals, which consists of a Tiger named Tugrik, a Lion called Tolstoy, a Bear called Kumar, a pack of 6 wolves called "The Skylar Pack", which consists of Kitso, Matuna, Kyle, Cheri, Oswald and Redwall. Lastly a Raptor named Raptavia. They are out to set a Guinness World Record as "Most People Devoured By A Group Of Animals".

Second is "Tolstoy Vs Tolstoy", where he meets a large bear that shares his name.

Third is "Sharky" and it follows a great-white shark, who eats someone, leaving his head in the process, he then realizes that the Shark Kippers are back. the shark gets abducted by the Bermuda Triangle. He then stumbles into a swimming pool where he is eaten by a 60-foot snake.

Fourth arc is "16-bit Theatre" and its where Carnivores becomes a sprite comic. It stars Austin Wolfclaw himself. Everything I say, I'm not making it up: Montecure eats Austin, then gets teleported into space, where he gets picked up by Goku who uses instant transmission to bring him to Africa and leaves him there, where Montecure loses his meal to Hyenas. He then turns into Super Tiger Montecure then, after eating one of them he lures himself into an ambush by one of them that he breaks out of and eats the rest, then gets teleported back to where we started where we would see Goku, Bulma and other characters that I don't know nor care about.

Fifth arc is "Big Bad Bear", which it involves a Bear meeting Hopscotch the bunny and Foxyfluff the fox.

Sixth arc is "Lothan can't say No". This arc is about a boy named Lothan who is cursed to apparently what Carnivores fans can vote to Lothan's Fate. This is where things get really disgusting and ludicrously stupid.

Seventh arc is "What goes on in Real Life". It features Austin Wolfclaw himself.

Eighth Arc is "The Return of Raptavia". It is basically Raptavia getting revenge on Tolstoy for eating her at the first arc.

Tenth Arc is called "Ratefan's Endeavers". A character called Ratefan has been given the task of rescuing a farmer's daughter. Its actually based on Austin Wolfclaw's own mod on Everquest II.

Eleventh Arc is called "Maul" and this is where it goes from stupid to downright insulting.

Twelfth Arc is called "Macro and Micro" a war has been declared between the Macros and the Micros after one of them tosses a bus onto a bridge that was, apparently, under construction. Or that's what's assumed at first then it turns out it was because of the First "Annual Macro Has Bash" which she opposes. 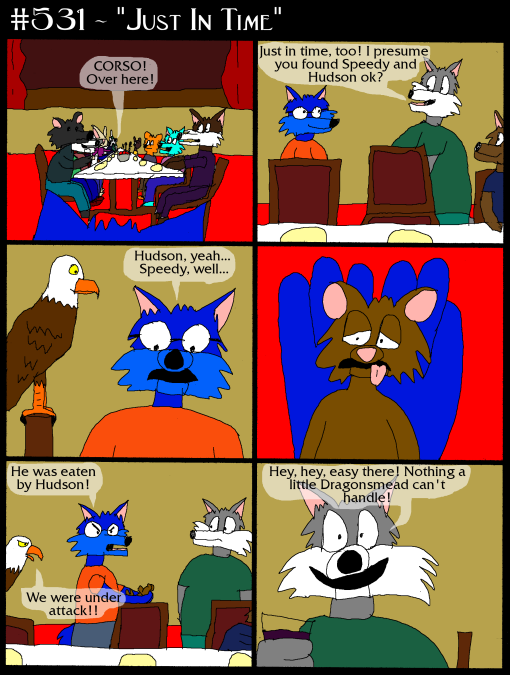 The characters should all drink hemlock instead, and make the Internet a better place. 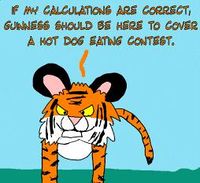 The first and foremost thing to make a vore comic is competent artwork, but Carnivores is a failure of incredible proportions.

Compared to highly regarded artists such as Strega, Omega and ForcesWerwolf to much less admired authors such as Mamabliss and Shaun Reveal of Boston and Shaun, Carnivores is without a doubt the absolute Rock Bottom of the barrel of artistic talent I've ever seen. Carnivores uses whats known as "Painter Shop Pro" but Austin doesn't seem to know how to draw a character with it. When a non-anthro character faces the camera of the comic, sometimes the back legs aren't seen as if they are standing on two legs, when they should be standing on four. Then there's inconsistency with faces when they are turned to the sides, for instance this Bear's nose seems to change length between panels despite the fact that he never moves a muscle from his position.

Also Austin is indecisive about how to put dialog in the comic. At first he seems to put different colored text for each character. This doesn't seem bad at first but on occasions the text can be on multiple different colored backgrounds, which can clang with your eyes. Also he at one time puts brown text on a black background which makes it very difficult to read.

To hit the final nail in the coffin, keep in mind that the comic has started on December 2002 and it has been over 8 years and the quality has not improved since then.

UPDATE: More recently, this person's art skills have genuinely improved, and he does art besides fetish material too.

The purpose of a vore comic is to produce a situation where a predator would eat a prey to provide an arousing situation: Carnivores at first tries to be that, and not just with hard and soft vore but also soul vore and macro and micro. As its established that the artwork is bad, it can't succeed in that since no one in their right mind would be aroused by any of the vore situations in this comic.

But even if you were to persevere and venture forth into the comic's story arcs, you will find things that will make your jaw drop and I don't mean in a positive way. To pick a random example, Arc Sixteen starts of with a mouse being swallowed by a cat, however the mouse uses extremely hot curry to escape, followed by an advert parody of a curry for mice to use to keep them from being eaten. All very well as humor until the next five pages where we learn that the mouse didn't want to be eaten because his wife was in labor, then we see a hospital for mice. The cat then immediately eats everyone there before the mouse could tell them they have contagious diseases and the cat dies of multiple illnesses as a result, only to be revived and transformed into Tony the Tiger. That wasn't even the first time that happened and it wouldn't be the last.

According to his about me page on Carnivores and what's on the Wikifur page, which BTW was not firstly created by him: Austin Wolfclaw, (AKA Michael Basel) was born September 14, 1980, enjoys seeing animals and humans being mauled to death by predators, and Carnivores is the second comic that he has drawn. What's the first? At first he didn't say, but now he reveals that he called it "Chester". I can't seem to find any details about that comic right now. All I know is for certain is that it seemed to be like Garfield with vore, he says that it was retired in 2002.

Austin has also given more info here; It tells us what he is using, at least.

Austin Wolfclaw has also a FurAffinity account, which lists all of his other accounts including Twitter, etc: He probably has accounts on various formats both well known and obscure. Just search his name under what you may have an account for, he may be there.

Austin has acknowledged his Webcomic's page on here on his Links page, with another from the Portal of Evil, which is now a dead link. He says he posts it for the "lolz".

This is how I felt after reading this comic:

If anything, Carnivores provides a lesson in what you shouldn't do when you make a vore comic.