A member of BWW happened to find this webcomic, and wondered if it were review-worthy. Though Candace 'n' Company is insipid and boring rather than outright horrible, it still qualifies as an example of how not to do a webcomic.

This webcomic never gets off the ground.

The basic scenario is about two very different young women sharing the same house. One is Candace, a sweet religious girl, and the other is Megan, a rebellious, punkish type. Candace also has a pet dog. However, like her furry equivalent Vicki Fox, Candace may be a Christian but she is no perfect angel either. Of course Megan finds ways to get back at Candace.

While most of this webcomic focuses on Candace and her roomie, there are other characters as well. There are Candace's boss and coworkers at the office she works at, their female neighbor, Candace's twin nephew and niece, Megan's boyfriend (presumably newly acquired), and a number of both roomies' relatives that are referred to in conversations.

Line drawings with flat colors and some shading: 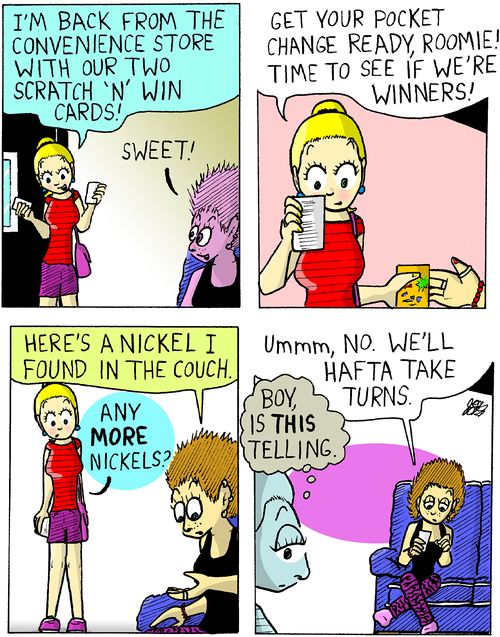 The jokes don't get much better than this unfortunately.

Linework is rather crude, figures are stiff, faces are oddly-shaped and look terrible in profile, proportions are inconsistent. But props to the author for occasional use of blue or purple colors to suggest distance or close-ups, as well as black background shading to fill in empty white space-something many webcomic artists don't think of. The style has stayed the same throughout the webcomic's run.

The webcomic starts off with this misfired attempt at a gag. Okay, at least some subsequent strips are better, but overall, what type of gags are in this webcomic?

Unsurprisingly, most of the webcomic's jokes involve our protagonists not always getting on. But there are other topics, such as Candace's workplace, her boss's marriage, Megan's workplace (which we hear shockingly little about), sports, modern technology, yoga, our protagonists' unseen relatives, and various holidays.

But how good are these jokes? There are some clever ones, but many of the others fall flat. Mostly, though, the jokes are merely insipid. While the other failed comedies reviewed on the BWW are basically unfunny, Candace 'n' Company is mildly amusing-albeit too mild, akin to an Andy Rooney newspaper column.

The above link says plenty already. He mentions having gotten plenty of rejection slips, which is no shock after one has seen this webcomic.

There are a number of unfunny would-be comedies reviewed on the BWW, though Candace 'n' Company is not quite as bad as the others. How so?

For one thing, this webcomic stays within the realm of realism. No talking animals (anthro or otherwise), no superheroes, no supernatural beings, no space aliens, no magic, no "we are in a comic strip and we are aware of this fact"...no such gimmicks at all. The scenario is something ordinary people can relate to.

For another, the characters are basically realistic and the type one would meet in real life. Not everyone may have shared a house with a frenemy roommate, but there are those with similar situations where they share living quarters with someone very different, even if it is one's own relative.

So what went wrong? Basically this webcomic could and should have been better. The artwork is mediocre and so are the jokes. But you might ask how funny you can make a slice-of-life story about two roommates without turning it into a sitcom?

The answer is, it's been done. Slice-of-life (newspaper) comics that are amusing without going into ridiculousness or fantasy include Blondie, Zits, Dennis The Menace, and For Better Or For Worse. Unfortunately the author of this webcomic just doesn't seem to have the drawing or writing talents that the respective authors of the above newspaper comic strips do. Perhaps he might get better with practice, but seeing the number of strips and how neither the artwork nor the jokes get better, I won't hold my breath.

UPDATE: The author seems to have called it quits on this webcomic.