I first discovered this comic years ago, and at the time, I thought of it as a cheap knock-off of Goblins, but with more pervy stuff. A long time later, someone brought it to my attention this piece of shit is still out there.

Once there was a group of monsters. They get attacked by adventurers. After getting tired of repeatedly being attacked, they decide to become PCs rather than NPCs and go out into the world away from home. Huh. Sounds A LOT like Goblins. Fortunately or unfortunately (YMMV) it falls out of the tracks of Goblins from there. They try to get rid of a vermin queen, which if this were a better webcomic I may have anticipated, but lo it is not and we get tropes and references. There is this other group with a blue nose guy who tries to take back his weapon which a goblin stole. And something about a god wanting the goblin/Rath to do his bidding.

Rath and friends get into shenanigans, and you know what that means! More ass! They eventually defeat an evil queen but her son emerges and he is a god. They are at the brink of defeat but saved by a god talking to Rath about giving power and Rath is now powered by SAD. Oh sorry, despair.

After that, we go to blue nose/Bork's group who are trying to get his sword back from Rath and are stalking him but land in a portal somehow even though that was not really shown. We get references to Minecraft and other popular things because they're popular.

There is a lot of the characters' drinking and playing pranks on each other before we move onto a much more interesting group, the pirates. By that, I mean that there is one of few female characters that is actually modest. She is, unfortunately, a slave, I mean apprentice to a lewd female commander who demands her to take off her dress as soon as she enters. A giant ship passes by and they go to encounter a bunch of dog people. Each one of them is a 'boss'. They have scouters and Deus ex Machina trinkets to pull them out of trouble.

For instance, the ice caster of the group has three rings. One that has an ice shield which cannot be penetrated (unless plot), one that lets her fly and one that gives her the ability to suddenly cast a spell. Which she did not use at all when she was having trouble with a knight who could also fly. Sometime during this, a person fell in a shit pool (of literal shit) and was walking around and gnomes were somehow pissed that someone was taking their literal shit away from them and charged into battle with the pile of shit to the ship. And when the dogs were beaten they were able to teleport.

And the current chapter which has the most horrifying display of boobs I have ever seen, and a stupid subplot of a god trying to fool a greater god and succeeding for no good reason besides plot.

Overall, this webcomic manages to reasonably reflect the artistic style of official Dungeons & Dragons illustrations, with its variety of character types and shapes, muted colors, and complicated pictures. But the most frustrating thing about this webcomic's art is that it could be much better. Many humanoids' faces are flatter and stand out in comparison to reptile and animal faces. It makes them stand out and not in a good way. If the artist focused more on faces and anatomy of people rather than boobs and asses, it might have been a decent webcomic. 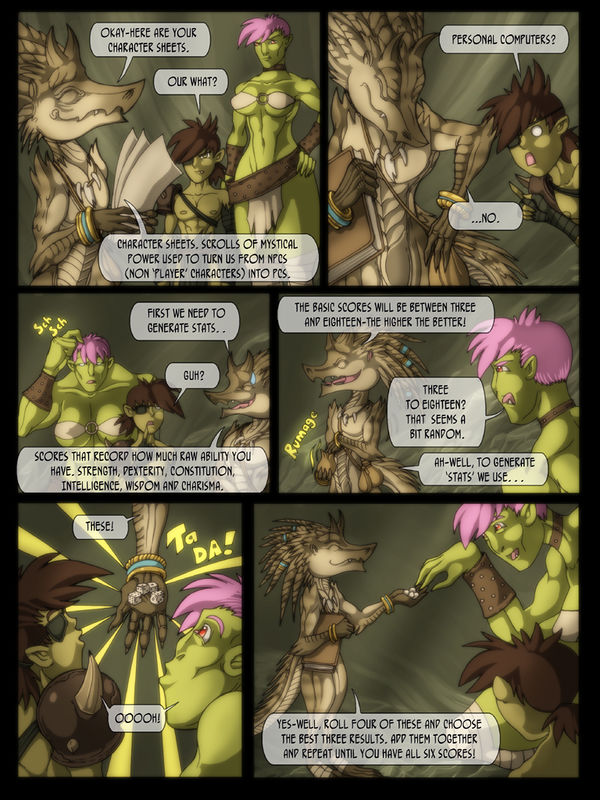 Near the beginning, before all the ass shots.

This artist's inability to draw a 3/4 view of a character to save his life is also really bothering me. And fueling my hypothesis that he should remove everything akin to a "plot" and sell this thing as a pinup calendar. 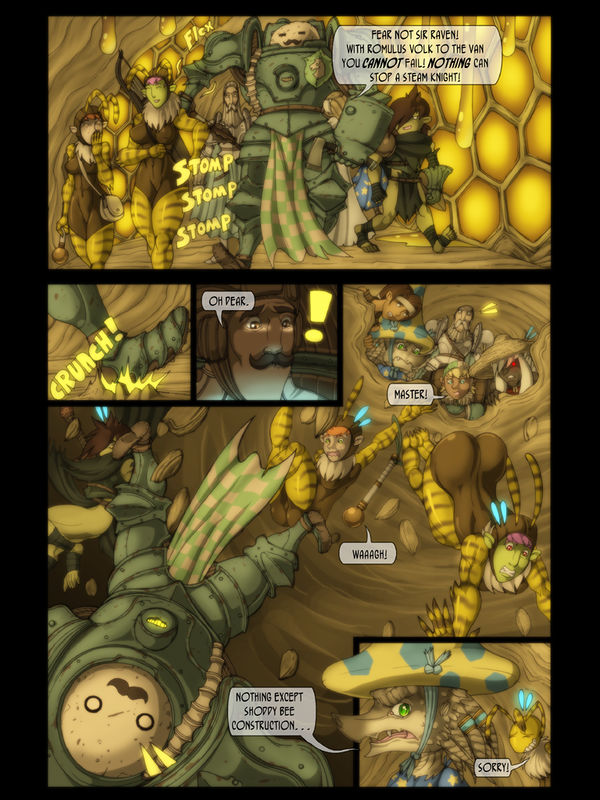 A badly drawn, weird pinup calendar. Seriously, most of the pages are just the characters standing there and talking, it is really dull.

The fact there's a heading on the main page clearly labeled "Secret Stash" (protip: that's not how secrets work) seems to lend credence to the theory that this is already just a matter of time (protip 2: I'd seriously advise against clicking that link. Seriously NSFW - if only it had actually remained as secret as possible).

This comic's story is fractured into 5 or 6 stories in one webcomic. It makes it difficult to read or remember the plot.

Story 1: Rath and friends, our main 'heroes' of the story. The only thing they did that was heroic was defeat an evil vermin queen, after which they had a massive party that lasts months (real time) because of the fractured nature of the comic.

Story 2: Bork's group tries to find Rath but get into a portal and get trapped into various references. They eventually briefly meet up with group 1 and then they leave. They are currently trying to become adventurers.

Story 3: Lord Darksoul's actions and antics including somehow fooling a more powerful demon in spite of Darksoul's minion telling the Greater Demon 'we did not kill them'. They did this by having costumes and a cardboard cut out of a dark elder.

Story 4: A group of misfits, a pirate captain, a photographer, a small dog (or kobold), and a lizard woman. They suddenly see a large ship and go fight a group of Gnolls.

Story 5: Centaur of Road Wardens tries to help out with the community but is stopped by Road Warden's laws of paperwork. She says fuck this and goes out to find ex-pirates to help with a mysterious ship. They meet up with group 4.

Group 4 fight the gnolls in which the fight gets more and more ridiculous. Each Gnoll was considered a 'boss' monster. The first Gnoll was fire based and was able to make a super large fireball by absorbing magic and releasing it. During the time the first Gnoll was fought, the kobold plays flux monopoly with a puppy gnoll, whom when he lost went berzerk.

Around this time group 5 enters play and the centaur lures the puppy gnoll away. The second Gnoll tries to protect the first one so he can shoot a super fireball, and has sudden spell, ice shield, fly that not only come up suddenly but gives a lame excuse as to why she did not use them before. The superfireball goes off but the strongest warrior was able to keep the fireball together by grabbing onto gnoll 1. The third Gnoll is a construct which cannot even be scratched by the best fighter. But wait, the rabbit the kobold healed suddenly cuts it into pieces, totally reasonable there. The gnolls then get away with recall, which brings us to story 6.

Story 6: The gnolls, which focuses on the gnolls' punishment for not having performed their mission properly but the leaders are being lenient because gnoll 1 is a prince and decide to just exile them instead. This is where we currently are in the story.

I can find nothing besides the links provided.

This statement from the Patreon for when it reaches $1000/month "Upon reaching this goal I will create a steamy wallpaper of Yeshka involved in an act of wanton debauchery with partner or partners of the patrons collective choice!" probably says enough for now. Only $157 to go at this time!

Somehow this guy has a Patreon bringing in $815/month from 116 patrons (who've actually paid or possibly joined since the last payment period at the start of September 2016) at the time of writing this.

An earlier version of this review then read "that is not too surprising since he sells sex to patrons like the whore he is." but then as the next section goes on to demonstrate that if this were true, he would actually have been paid, and there is evidence to suggest he might not even be managing that. At least not to the extent that some of the numbers seem to be suggesting, anyway.

Patreon for By the Book analysis