Like many awful webcomics, Bristled got its start through someone's forays on Second Life. In this case, Azraelle Wormser and Ruac Lycia are both SL characters. Be sure to find them on the game, because I'm sure Az (real name Stephanie Mebius) would just looooove some friends. She was about to name her comic "Fur Real" and "Fur Hire", but finally she saw a picture of her Mary-Sue, Azraelle, with bristled fur (she was probably bristling because she had ESP and therefore could see the atrocious webcomic she was to be featured in.) 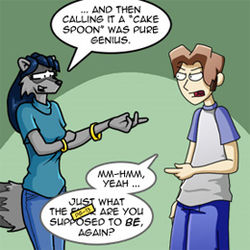 Of all the webcomics to suck up to...

WikiFur also has the following information to impart. It offends me to no end that both the Bad Webcomics Wiki's structure and Bristled's artistic inspiration come from the same place. No, wait...

"In the episode "Inner Conflict," two small figures that represent Beth's good and evil sides appear on her shoulders. The "good," who turns out was just there to find a good place to read, was in fact reading The Divine Comedy by Dante Alighieri."

Wow! That's fascinating! How'd they figure that out? The book's cover in that strip is unreadable. And I'm not vomiting, which suggests that my site doesn't have anything in common with this webcomic's. Please don't disrupt my peace of mind any more than you have, Mebius.

Regarding how I came to know of this webcomic: I found it while looking over the Something Awful forum thread "I fixed Ctrl+Alt+Del for everyone" (subscription required). Apparently, the webcomic's author, Stephanie Mebius, is one of the few furries who enjoy the webcomic so much that she got an account on their forums.

Kind of? There's "kind of" a story in Bristled. Yes, I think that's the best I can put it. More specifically, "three roommates, two of which are ditsy and stupid, one of which is a bitchy rabbit, go about having OMG LULZARIOUS ADVENTURES WITH EACH OTHER." In Bristled, the storyline is practically separated into "episodes", or as webcomics geeks like to call them, "story arcs." Each arc ends in maybe a dozen or so strips. Whether it's Mary-Sue Azraelle killing her coworkers, Beth being a bitch, or New Demon-Roommate Ruac/Axenos impersonating Beth and getting her male coworkers in trouble for sexual harassment, you can be certain that these story arcs will be enthralling adventures to absolutely nobody except for Mebius herself.

No, no, NO. Mebius' style, at best, appears almost to emulate Ctrl+Alt+Del in its "B^U" style, to the point that it uses the same font as CAD. At worst, it's just completely wonky. Side profiles have the mouths on the cheek of the character's face, rather than at the front where a mouth should go. In front view, her rabbit character's nose looks like a camel's. Tails are (in some of the worst examples) placed in the middle back rather than at the tailbone. Characters at work and in public places alternate between being barefoot and wearing shoes for absolutely no discernible reason, and the feet are almost always bigger than the shoes should be able to hold. 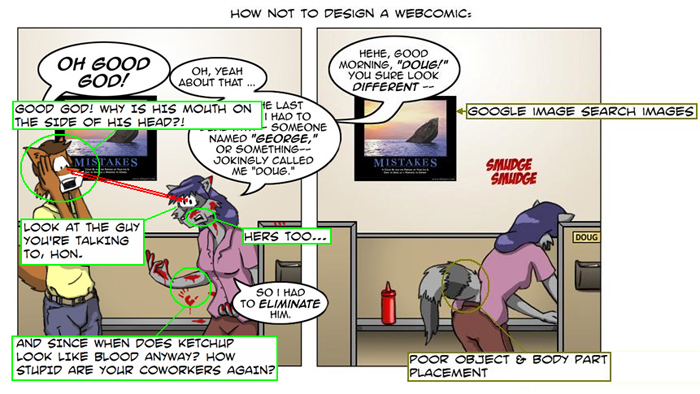 In the example I added to this page, I was about to attack Mebius for the "disappearing ketchup bottle," as there should be a little bit peeking out from behind her dog fox squirrel coworker. Then I realized that the joke was that she was using the ketchup to make it look like she'd bloodily dispatched "George". Ugh. It's not much to discuss, but seriously, who's stupid enough to mistake ketchup for blood? It's so ridiculous, so absolutely stupid that I didn't even catch the punchline until I'd already started up Photoshop. And the next joke, on the next page, is even worse. Seriously, what the Hell, Mebius?

Which, appropriately enough, brings me to the writing on Bristled. I don't even know what to say, really, with Bristled's writing. I would say that it's just boring and vapid in its plot and mundane story, but then there's also the fact that "Azzy" relies so much on the standard webcomics formula. She's intent on using this webcomic as a blog. Her Mary-Sue attacks faceless coworkers. She hates waking up in the morning. You can pretty much determine the rest. You'd might as well put it into a mathematical formula and use it as a template for every single webcomic every hack is going to make, ever.

Oh... she does have one thing that she's got that absolutely no other webcomic has FOR SERIOUS YOU GUYS. It's her trademark meme-type phrase, "Holy freakin' Bejeezus!" Yes, so funny. So hilarious that she's got it on her FurAffinity as a stand-alone parody joke. She'll probably have it on a "witty" T-shirt in her store, once she's done plastering clothing with pictures of her Mary Sue holding a shovel like she's about to hit somebody. Oh, yeah, and she's got demotivators on FurAffinity too. She's just at the cutting edge of comedy.

And, yes, she loves her CAD references. She even credits Tim Buckley for the CAD characters in this one. But not VG Cats creator Scott Ransoomair for Pantsman. Hey, it's a little bit changed from the original, that doesn't count as plagiarism at all.

The character biographies are a good example of the shit writing and characterisation that is allowed to run rampant in this comic:

All of these characters are female. The males are depressingly pathetic throughout. Most are just co-workers that happen to be good laugh-fodder for the female characters to lash out at through random violence, or in this particular case the threat of random violence and of course the ever-present potential sexual-harassment type issues. Clearly, Mebius doesn't have a grudge against men at all.

Artist "Steph" gives herself the great honor of her own spot on the character bio page of her comic's website. Apparently her 'odd quirk' is that she "Has this crazy idea that drawing a comic will make her famous". Clearly, gone are the days when people drew comics because they enjoyed working with the medium. Not since Buckley has there been somebody on the internet so determined to make a living off of something that they know absolutely fucking nothing about.

There's really nothing left to say. You've been warned: Bristled is a bad webcomic. It's unfunny, packed with bad art and bad writing, and it's bland, boring, and banal. It's not quite as bad as Jack, not nearly as good as Sluggy Freelance, and not quite as mediocre as Real Life. It is, indeed, the Ctrl+Alt+Del of furry comics. The author of this webcomic probably takes that as a compliment. It, quite definitely, is not.

No activity on any of these sites for a while.