Before we get to the review, a bit of history. This review is actually a new version of an old review that we had for this comic that was tragically lost when the site was vandalized back in 2011. Since then we have been procrastinating regarding writing the review again. And in that time the creator of the comic hastily deleted all archives of the comic before 2010. Which were, due to constant criticism, a major source of embarrassment to him. So, before we get to reviewing what is left of this comic, let me just offer you a summary of what its creator is trying to hide.

The original Bridgette's Belly was a fetish comic. Specifically a pregnancy-fetish comic with furries. The plot is that Bridgette is pregnant, no one knows who the father is or how she got pregnant without her knowing who did it. But it doesn't matter. All that matters is that she is pregnant so that Fraser can draw pin-ups of her to get his dick hard. She remains pregnant for well over a year and then she has an anticlimactic birth scene, after which we don't see her baby for another year because the plot instead focuses on her eating and getting fat so that she can continue to look pregnant. That way Fraser can continue to jerk off to his comic. A year later the baby shows up again and she gives him away to someone else to raise. Why? Because the baby didn't matter beyond his use as an instrument to keep her pregnant. Then she goes to sleep and wakes up pregnant again with no explanation.

From my understanding this process repeats itself a number of times, and when the comic's early years get deleted, we are left with the current comic which begins with Bridgette already having three kids.

UPDATE: Now it seems that Andrew Fraser has decided to get rid of his revised webcomic and put the original version back up. So this is what is being reviewed.

I only learned of this webcomic through the BWW, and that the original review had been wiped out, so I volunteered to make up a new one. The original webcomic had been taken down for a new version, and I reviewed that. Since that time, however, the author, in moving his entire webcomic from original host Keenspot to his new hosting site, decided to put his original webcomic back up. Which was an improvement in a way - it makes more sense than the revised one did. 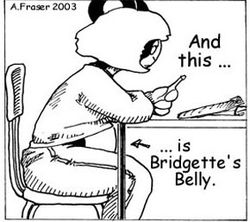 The true star of the webcomic.

Volume One: Bridgette Ouvry is a high school student who is expanding very rapidly, and her friends notice. They think she has bulimia, but Bridgette is getting bigger for a different reason. Bea, a giraffe who is Bridgette's caretaker while her parents are overseas, has her own way of dealing with this matter. As it happens, Bridgette happens to know something about Bea as well. Meanwhile, Bridgette's friends try to deal with her presumed bulimia...by serving her lots of fatty foods. But somebody has already figured out the truth, so Bridgette owns up about her pregnancy to her friends...and just in time, too! (It's a boy.)

Ah, but even a new mother cannot get a break. Never mind that the bake sale had been arranged because two boys killed the school sports mascot rabbit (a four-legged one) and they need to replace it. Of course, everyone's baking and Bridgette had nothing to eat. So of course, when a set of brownies are baked...well, things don't turn out as badly as they feared. Then again, they do. Fortunately the crisis is short-lived.

Volume Two: New people join the story. Soon after that, a small fire emergency occurs, and Bridgette is accidentally locked in the kitchen, where she can really eat, eat, and eat...and we can see her take her shirt off. Bridgette's absence is eventually noticed, but she is found. And Bridgette can be made to shrink down as well.

A new story arc has the characters plan a party. So will it go better than last year's? Perhaps it would take Bridgette's mind off her absent parents. At least Bea has the same idea. Well, the party begins by having everyone explore the Fudderman estate, where their goal is to find Georgie. They do so, but also find other weird things in the process.

I get the impression that there is more of the old story that the author intends to post and he hasn't gotten around to it yet. No matter; there is enough here to make all the review points.

Before I describe the artwork, let me give you a quote from the WikiFur article on the author:

"He graduated from Aquinas College in 2000 with a Bachelor of Fine Arts degree, Majoring in Sculpture and Minoring in Ceramics."

You read right, a Bachelor of Fine Arts degree, though admittedly not in drawing. Despite this, the pictures look like they were drawn by a toddler. No exaggeration.

The characters are line drawings with black patches and only tinting for backgrounds, but there is no sense of depth - the characters look as flat as cardboard standees. There is only minor shading for the bodies, and the heads have none. Most of the characters' heads look like billiard balls with features drawn on with a black marker, and hair and ears stuck on afterward. On top of that, proportions and limb lengths are inconsistent. Though the characters are funny animals, it is difficult in most cases to determine their species.

The story is erratically paced. Sometimes it moves too quickly (Bridgette, at the beginning, has a shockingly fast time from learning of her pregnancy to giving birth-and her birth process is surprisingly quick, clean, and painless). Sometimes it moves too slowly (the joke about Bridgette eating everything meant for the bake sale goes on for too long).

Not all webcomics have them, of course, but Bridgette's Belly could and should have had a cast listing, with all the major characters and story interactions, to make everything less confusing. 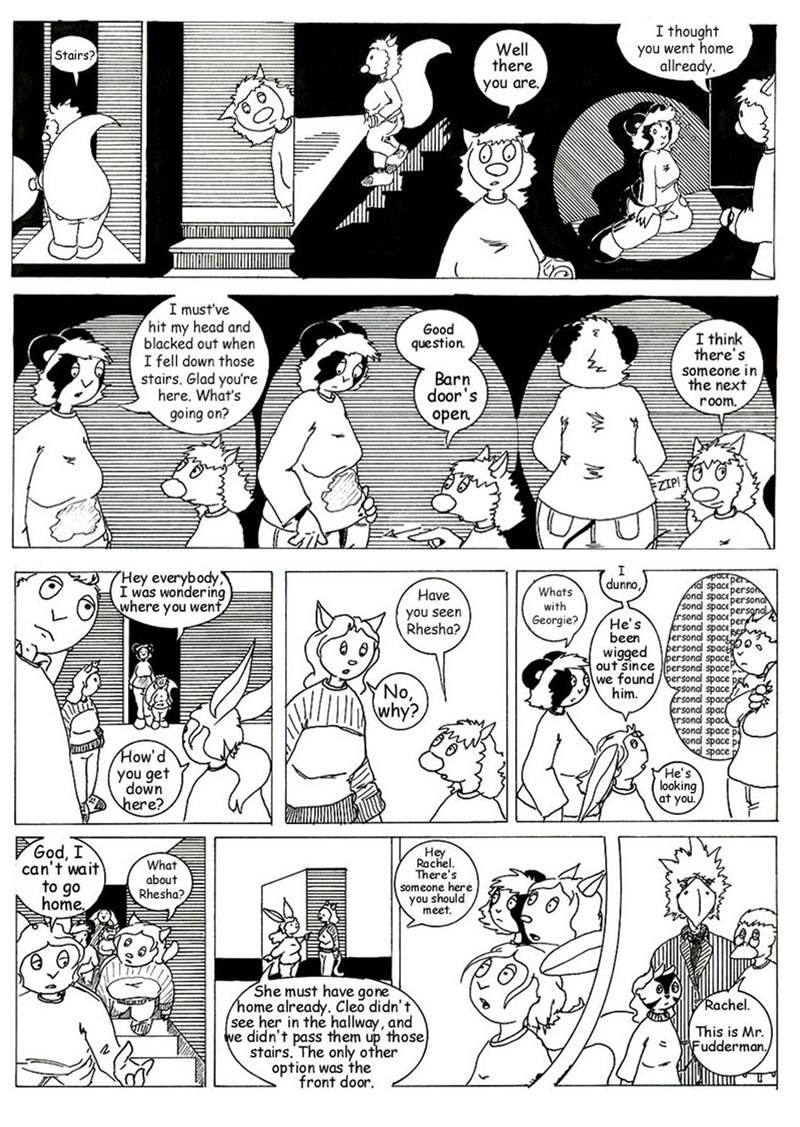 Worst of all, however, is the sheer number of spelling mistakes. Presumably English is the author's native language, and he is a college graduate, so either he's a sloppy writer or has some form of dyslexia. At the very least, though, if the author has spelling problems he should get somebody to proofread his strips, especially if he puts them into books and offers them for sale!

The creator of this webcomic is a 37 year old man named Andrew Fraser. Who was, at the time the first review of this webcomic was posted, being laughed at and harassed by Portal Of Evil who were making fun of his webcomic and calling him a racist (I don't actually know if he is. I just know that's what he claims they were saying).

After the review was posted (less than two weeks after to be precise) he emailed its author the most whiny letter we have ever had the privilege to receive. In it he tells us a long sob story about how hard it is to get bad criticism, learn to spell correctly or raise your child when you are preoccupied with trying to sell your awful comic. He ended his pathetic plea for pity by implying we must all be children and asking us to show him our comic, if we think we're so cool. So obviously we didn't exactly feel sorry for him.

I don't think I need to say any more. You get the idea of what kind of person this is.

Can you review a pregnancy/inflation fetish webcomic on its own merits? Can you dislike a webcomic's concept and still say what is good or bad about it, as an artistic creation?

That I shall. The art is horrid, and I really hate the billiard ball heads on the characters. The writing has too many spelling errors which are not corrected. The comic potential could have been better used. The pacing is erratic, as mentioned above. The best thing about it is that at least it isn't Boston and Shaun, which was a stuffing fetish webcomic that looked superficially like a kiddie webcomic. Bridgette's Belly, despite its furry cast, makes no pretense of being family entertainment.