When I was reading Escape From Terra, this popped up in one of the ad banners and looked interesting. Upon clicking the ad, I was brought to Namco's cash-in website of platitudinous product placement, in which I was presented with this. I didn't think we'd ever feature a comic which was "almost there, but not quite", but here it is.

Right about here. It originally showed some potential, but by page five it began to display some symptoms of failing to get better. I wouldn't really call it a downfall, more like a state of inert quality.

All right, this comic is about Bravoman, which is a Namco video game from those halcyon days of gaming where platformers were a dime a dozen, floppy disks were better than CDs, arcades were stocked with actual games instead of ticket machines, and Funco Land was still in its fledgling years of infancy. It originally came out for the Turbografix 16 and was later released on the Wii virtual console. The game concerned a Japanese salary man who was visited by an alien who gave him the superpowers needed to defeat some sort of robot overlord.

You want to know what the story of the comic is? There is no overall story. One event happens, then another event happens. Those are the story arcs, and for a gag comic, anything more would probably ruin it. In this sense, it's not bad, but if you're looking for an actual story based humor comic, you'll be disappointed.

The first arc was good (though I guess technically it wasn't really a story arc, more like an introduction), but the rest are all just... mundane. While it starts off as a somewhat amusing parody of itself, each subsequent story arc just keeps being unspectacular. Do the characters have wacky adventures? Yeah, but they're full of meta jokes and often have very unfulfilling resolutions. Do they interact with each other? Yeah, but the interactions are often unimaginative and played out to the point where any comic book veteran could predict what's going to occur. Do they reference past events which happened? Yes, but only as meta jokes.

It wasn't long before I began to challenge the author's writing abilities in my head. It's like I kept thinking to myself, "Come on, Matt. Show me what else you got."

Not much to say here. The artist (Dax "D-Gee" Gordine) is competent and creates professional-level artwork. There's an occasional gradient void that the characters seem to float in, but it's used sparingly and only at times when it fits. I do have a complaint that they sometimes look like children and always have this cankle thing going on, but the art style more than covers for that. Face gags do pop up from time to time, though, but they aren't over-the-top KAWAII ANIME DESU ^__^ faces. It seems that no matter your preferences, the artist manages to perform admirably, and only the most anal, pedantic, and nitpicky of critics would straight up hate it. Bonus points for versatility on Dax's part. 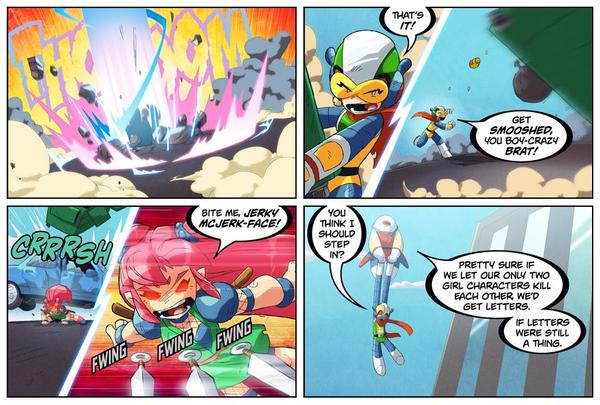 It's really not that bad.

This can be separated into two sections: Composition and Characters.

Most of the jokes are meta humor. And by most, I mean almost all. It's kind of funny at first, but you will soon realize that it's one of the only punchlines that the author wants to use. Other punchlines are: They draw blueprints, LOL so wacky/random, and satire which works.

Please understand, it can be funny if Matt tries. That doesn't make up for the fact that most of the jokes are trite, and very rarely will they be cunning. He's proven that he can write a good joke, but it's as though he chooses to half ass it and recycle every funny gag that you've seen before. He even follows a formula for the jokes so much that he made a meta joke about it, as though calling yourself out on your failings somehow fixes them (I feel that I must mention: after that strip was uploaded, the newer ones began to derive from the formula more often. This is the only element in which the comic has attempted to improve itself). If you're looking for humor you can't find anywhere else, this isn't the place to look.

All of them can be summed up in the format of "Quirk + Generic Personality". Being a gag comic, I don't expect much else, but a little more personality couldn't hurt, could it? Let's take a look.

Matt Moylan has worked on a monthly Street Fighter comic as well as several Transformers comics, but only as the managing editor. His other work where he did the writing is a webcomic called Lil' Formers. He's not that bad of a writer when he wants to be, and he seems like a dignified and pleasant chap, so there's not much else to say except that Matt has the capacity write a damn good comic. It's a shame he doesn't put as much effort into this one.

The writer is trying to make a gag comic, and overall, he's displayed a competency which is only present in a few of this comic's strips. It can be funny, but often fails to be clever or witty. He has shown that he can write good jokes. But, on the other hand, he often fails to go the distance to make those jokes special. If there were two words I could use to describe this comic, it would be "untapped potential". It hasn't begun to decay in quality, but it hasn't tried to improve much either. It's like a plateau of mediocrity with some bumps on top to break up the sigh-worthy flatness of its structure.

Overall, it's just short of a good comic. Those who are looking for an occasional chuckle will overlook its flaws, but the critical will easily spot them and exhale a powerful "meh".