Okay, like the The Fate! review done by Webkilla, I found this webcomic in YouTube, via multiple harsh reviews about it. So I got curious and went to the site. Oh boy! This needed to be digged in a review.

The story about four gay guys: The Prep, The Goth, The Nerd and The Jock, and how the Nerd met the other three and gets into the polyamory relationship. The rest is what you expect from romantic sitcom: The date in the arcade, playing videogames, the cheerling episode, bedrooms irruptions, etcetera. This is also combined with animu~ tropes like the flowers of happiness. 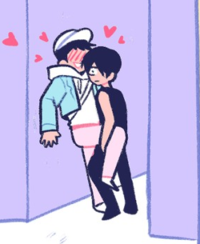 Basically what the comic is about

When I say that you have turn down the bright of your screen, I was not joking. The palette of pastels color is really so sparkly~ that I’m pretty sure that putting the browser in night mode will not solve it. I’m sure that the author selected this palette for emulate the manga style, the style of the drawing confirms it, since is really similar. Hell, even it has the same drawing errors that usually has the manga. This is more remarkable with the mouths, here some examples:

Besides that, the comic usually does not have backgrounds, just solid colors. Or some type of spot patterns. Or cloud backgrounds. The point is that is strange to have complex background, but it compensated with lots of ambient objects. It’s obvious that Ray wants you to concentrate to the characters, but because of this you will note more the drawing errors. Not much else I can say about the art, since I’m not expert on Western manga.

We will start with the names of the principal characters, or rather the lack of names. I don’t exaggerate when I say that they literally are called like the archetype that they represent and act. This is confirmed with the character sheets that the comic provides (Yes, this comic introduces the characters with character sheets, just like The Fate!, but more impractical, since has stats that is hard to deduce what mean like a RPG videogame). I never seed something like this; I don’t know a comic that their protagonists are not named in absolute… Well, with the stickman gag-a-day maybe, but this does not enter in that genre. Now, you will ask: How do they call each other, since they don’t have names? Easy, all the time they are using puppy names, like “babe”, “sugar”, or other mellow nicknames. And since the protagonists has no name, forget about know the names of the secondary characters, like this girl going along with the Nerd.

So, how they are? What is their personality? What will you expect from them? Well, there are a reason of they are called like an archetype; because they are an archetype in its whole. They are literally walking stereotypes. There is nothing that makes them stand out. Nothing at all. Examples: The handholding convenient interruption, the Nerd is a virgin, the Goth smokes like a fireplace, the Nerd is weeaboo and repeat manga tropes in public, Prep also repeat ecchi and hentai stereotypes, etcetera. Hell, even when the comic tries to make them unique, it does it by putting them in other stereotypes, like the Jock being a scaredycat; or the Prep being an alcoholic. These types of things have been seen thousands of times. Oh, and since this a polyamour gay comic, we have that type of stereotypes, like the arc of the quartet going to a pride parade.

Finally, for a webcomic that has a story so bland (that is not worth of describe it), it has so much “What The Fuck” moments, that will leave you scratching your head. Some of these moments are: “GTG I GOT ASS” in a note; the Jock and the Nerd almost fucking in middle of a dinner; Gotta go! I’m gonna be late for anime school; AMONGUS *Music*. There are more, and they are so off-putting that they will take you out of the immersion, especially with the selected vocabulary, with so refined words like: morosexual, G G E Z, hot choccy, vidya gamez, yummy, among others. I swear that when I saw these words being pronounced by college students in their 20’s, my reaction was like this:

Before going with the author section, we have to talk about the advertising. Look, unlike other Webtoon’s comics reviewed here, this is does not belong in the Canvas section, but the Originals section. What is the difference? Well, in addition of being frontpaged in the DialySchedule of the section and have a personalized page for your archive; but also that the website advertises the Webtoon’s originals in anywhere they can put it: YouTube every single site of webcomic hosting, some sites of news, TikTok, EVEN IN MOTHERFUCKING MAX PAYNE! 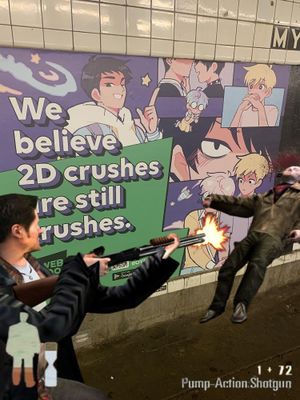 Apparently Rockstar do this for immersion, to better reflect to the real-life location.

Regarding to the public’s reception to this comic, it’s polarizing. There are people that liked so much the webcomic that even they made animations of the episodes, and there are people (the majority, by the way) that hate it because how stereotyped and fetishized are the characters. Hell, even TikTok users hate this webcomic, TIKTOK USERS! If that is not a signal that you’re doing something wrong then I don’t know what will do.

Ray (refrain) is a 23 year old (at the time this is written) trans male illustrator/graphic designer based in Indonesia. Also in his twitter defines himself like “professional degenerate wifeguy”. His other works are Whalien and Moon Bunny, a sci-fi/fantasy comic that only has 1 page right now. In addition of the hate about the comic itself, apparently there was a recent attempt of cancelation because of an anti-Semitism tweet in 2016, according to this thread. Not much else is known about him.

Aria Villafranca (ariajdv) is a Filipino-American trans woman based in Savannah, GA, comic/fil-am artist and editor. Has a BFA diploma in Drawing and Painting from the University of Hawai’I at Manoa and a MFA diploma in Sequential Art from the Savannah College of Art in Design. She is author of Vox: The Prequel, Vox, Potion Run, Let’s Get Takos, Jenny B and the Wishmaster Demon, 10 Years Later, and Practice Late Perfect. She nowadays works for Webtoon Entertainment like an editor of the majority the Webtoon’s Originals section. She is interested in fantasy and sci-fi adventures, drinking coffee and walking her dog. She usually uses her twitter (besides retweet announcements of webtoon’s webcomics) for retweet things like “anti-transgender legislation” or the “Don’t Say Gay” (anti-grooming) law. So you have an idea of the type of person that is her.

For the bright side, unlike Polyamory Comics, the things that happens here is not based in real experiences. Despite this is a good thing (for the author), does not make this Webcomic good. They are just stereotypes with legs hanging out. It’s really tedious read this thing; and if you are gay, looking how Ray uses these walking stereotypes of gays to attract fujoshis like flies to honey will enrage you. I know it because there a lot of LGBT+ youtubers are not happy with this webcomic, even some are accusing it of transphobic… There a character that is trans? I’m not sure; I leave you to discover it. Anyways, the only thing that I still can’t believe is that this webcomic is frontpaged together with Bluechair from Shen Comix in Webtoon. What world to live.

Finally, but not least important, we will have the parade of people that has common sense:

And there a lots of TikTok videos about the theme, search it yourself...