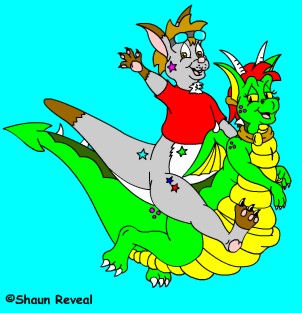 Oh, it looks so cute, doesn't it? Nothing horrible and vile could possibly be lying beneath the surface here. Nope.

You know, when I stumbled onto this webcomic for the first time, I thought it was very innocent and unassuming. I actually thought that this thing was something whimsical meant for general audiences. I was fucking wrong. This webcomic is about stuffing fetishism-stuffing with food to get one very fat, or stuffing people into marsupial pouches (more on this below). Boston and Shaun just happens to be the story of a kangaroo and his little dragon friend, and said dragon friend always encourages the kangaroo to overeat, swell up, or otherwise get fat.

I REALLY DIDN'T KNOW THERE WAS A FUCKING FETISH BEHIND THIS THING. Words can't describe the feeling I had when I first found out about the stuffing fetishism behind this webcomic, so I made a little picture to sum up my emotions. I call it: "Norad Bush Bleeds from the Eyes." 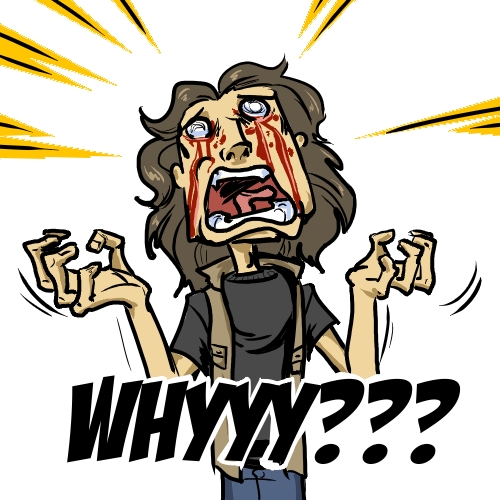 That said, I'm revisiting this review to educate folks as I have been recently educated on spotting fetishism and why it's not okay to put it in an otherwise kiddie-looking webcomic.

Artwork from the original incarnation

Could this thing ever go up??

Boston and Shaun is about the adventures of Boston, a little green dragon, and Shaun, his kangaroo friend, with a few minor characters thrown in. (In the original version, Shaun was a human boy.) There isn't much of a plot here except that Shaun is young and must go to school and take his dragon friend with him wherever he goes. Then a lot of jokes ensue about Shaun getting really fat when he gets nervous or eats a lot of ice cream. Really. This is one of the major driving forces of whatever plot is here. Shaun either expands from getting nervous or fat from overeating. Everything else is mundane bullshit.

The art here is atrocious. This webcomic is a major offender in the copy-cut-paste category, often reusing frames with little or no changes. The backgrounds are often simplistic gradients and the character rendering is pedestrian at best. While some of you may say that this is MS Paint quality, I argue that some sort of vector program is used to put out this tripe. If you look at the lines that comprise, well, everything they are very smooth. Line width doesn't vary at all in the inking and there is no cel shading/highlighting whatsoever. This tells me that there is a very amateur vector artist at work. The artwork looks like some crappy clip art you'd find in some print shop software. 15 years ago.

Funny, she doesn't look too worried.

The writing is wretched. The dialogue often includes really weak punchlines, some that make you wonder if there was even a joke to be had. There really is no plot. Shaun's parents are mundane and stupid. Shaun doesn't want to go to school. Shaun meets friends at school. Blah, blah, blah. The mundane is very disarming, but don't be fooled by this thing. It slips into freaky creepy territory before you know it.

Throughout many parts of the webcomic, Shaun gets fat from getting nervous. Shaun overeats. Boston, Shaun's dragon, encourages him to overeat. There's a lot of expansion of this poor kangaroo here, and at first I couldn't figure out why. When one realizes that there's a stuffing fetish at play here, it puts a whole new spin on the (hideously) colorful picture we've got here. Shaun is supposed to get fat for the audience. Huge. Obese. And this is all because the fetishists out there are GETTING OFF ON IT. And it gets worse.

Boston likes to stay in his pouch. HIS pouch. Never mind that in the marsupial world, males do not have pouches. No, Boston just wants to hide out in what is essentially a WOMB on a MALE. Stop and think for a minute how disturbing this really is. At first I just wrote it off as just weird, but look past the innocent veil of this thing and see it for what it really is. More fucking stuffing. Stuffing fetishists like to watch people get shoved into certain parts of other people's bodies. LIKE DRAGONS INTO KANGAROO POUCHES. The whole sick picture is coming together, isn't it folks?

Shaun Reveal is a furry stuffing fetishist. What more is there to say?

UPDATE (27 April 2020): The main webcomic is finally off the internet, but there are still remnants of the old incarnation.

UPDATE (7 July 2022): Shaun claims his registrar Network Solutions pulled the plug on his bostonandshaun.com registration in November 2019 in an apparent mercy killing mishap caused by them not being able to charge his credit card. He rebooted the comic on a new domain in late 2020, but lost interest pretty quickly.