As a writer for this website, I pride myself on my ability to troll for challenges in webcomics to review. Typically, I try to find something popular or, at the very least, professional-looking to tear to shreds. My goal in doing this is to open readers' eyes and show them that just because something is pretty or popular does NOT guarantee it'll be good. Well, I chanced upon Boss Noodle after trolling the the review here for Dave Cheung's previous work, Chugworth Academy. In the "Discuss" section, I happened to find a comment discussing the new work by Cheung, and here's what was said:

Cheung promises to deliver the following with Boss Noodle:

Yaouhuntressearth even mentioned having read the first episode and stated that it wasn't that bad. To be fair, the comment was as of January 30th, so it's difficult to judge material from a mere 8 pages. But Cheung write something that's not that bad? I couldn't believe it. So, I took the challenge and read the comic for myself.

Time has gone by. More material has surfaced and Dave Cheung shows himself to be as repugnant as ever.

While the beginning dialogue is riddle with awful ghetto speak, things take a turn for the worse when random-girl-in-whorey-school-girl-outfit shows up. What follows is action so stiff, and ill-coordinated, you'd think you were watching your grandma and great aunt in a cripple fight. After that, what little story there is falls into a vat of stupidity so deep, it would take a miracle to get it out.

Unfortunately, Dave Cheung is no miracle-worker.

There is no plot. We have Cheung's ridiculous, whorey Mary-Sue beating people up and spouting retarded dialogue right afterwards. And then she meets someone even whoreier and stupider than her. And then they have coffee. That's literally it. I understand the story is only 24 pages in, but that's enough to tell if a comic is going to blow or not and this one most assuredly does.

In 24 pages, a plot can be set up. A compelling plot. Characters, through use of interesting dialogue, can reveal bits about themselves, or move along the story, but Dave Cheung doesn't do either of these. He's just content to make his female characters half dressed and stupid and his male characters fully dressed but equally stupid. There is no point to this. There is no want in me to know what happens next.

Dave Cheung has a reputation for being a good artist, however, this is only because he panders to internet sleazebags with his unending parade of BEWBZ and panty shots. He's not bad, but he's not nearly as good as his reputation would have one think. Cheung's artistic vice in Boss Noodle is the same as it was for Chugworth Academy. Too much tits and ass, and not enough of anything else happening. This is an action story and I've said before that action sequences are difficult for an artist, but one would think Cheung, with his constant practice at anatomy and dynamic angles, would be able to handle it, right? 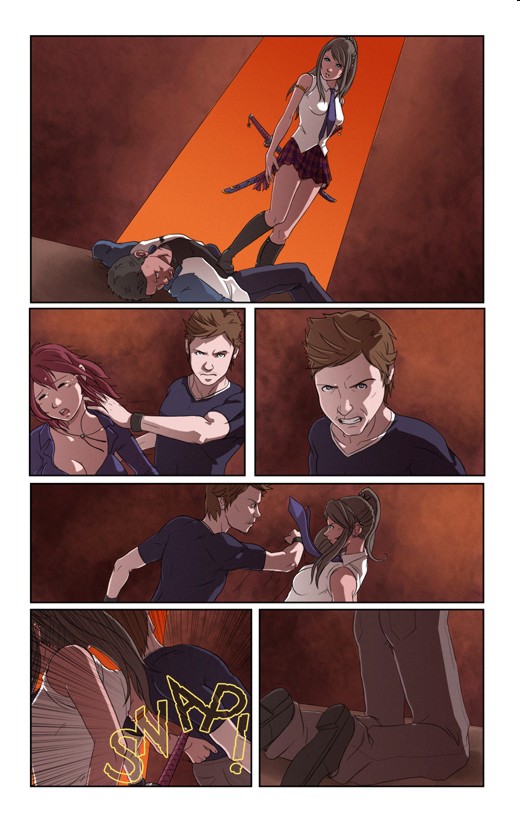 Surprisingly, no. Cheung does not know how to show characters really throwing a punch nor does he know how to coordinate a fight sequence. Or emphasize the important parts thereof. Or what the fuck he's doing at all. I look at his action frames and I see the action, but I can't feel it. Other than bleeding and a limb bent the wrong way, I can't really feel that any fighting has taken place here.

Another example, we have stupid strawman #1 here getting knocked down after our heroine kicks in the door. How the fuck did he land on his face? He's facing the door. He is impacted by the door. Logic says he would fall backwards and land on his back, not his face. But Dave Cheung doesn't know that because he's too distracted drawing his worthless heroine in the most fap-tastic poses.

And oh, the faptitude. There have only been two women featured in the comic thus far and already I can see a familiar pattern here. This comic, like Chugworth Academy before it, is simply another string of excuses for cheesecake. Our first female character, Robin, is dressed in the most impractical outfit imaginable for kicking down doors and taking on baddies. The school girl whore look might make more sense if she's in high school trying desperately to hide her low self esteem, but for vigilante ass kicker? She has no armor, no decent footwear, hell she doesn't even have any pockets. How am I supposed to be convinced that this woman is so kick ass if she doesn't even look the part?

Oh, but it gets better.

Our next contestant, pictured above, is some random girl who gets harrassed by a couple of guys while walking through an alley and thusly saved by our knight in shining plaid! Look at this girl. FUCKING LOOK AT HER! What woman buttons her shirt like that? I've seen meth addicts look more put together than that. If the goal is to make her an "ordinary girl" as a foil to Whorey McSchoolgirl, then artistically Cheung fails. This is not what an ordinary woman looks like, unless "ordinary" for Cheung is whoever's hanging around the methadone clinic.

The ultimate tragedy here is that Cheung has the capacity to do better but he's so wrapped up in his usual cheesecake bullshit that he doesn't even bother. He just puts out his wooden action sequences and as long as it's got a panty shot or some cleavage, he just tells himself "Meh, good enough." Except, no, it's not. Flat fight sequences that don't even make sense are not acceptable for an action story. Period.

Meep? She must be part roadrunner.

The writing is utter balls. This finding should come as no surprise to anyone even remotely familiar with Dave Cheung's work, but to the unindoctrinated, allow me to provide enlightenment. Dave Cheung, given his focus on faptitude and cheesecake, had an awful track record with Chugworth Academy. The dialogue was shit, the plot was non-existent, and the jokes were all based on the aforementioned cheesecake. Here are just a few examples of his past: 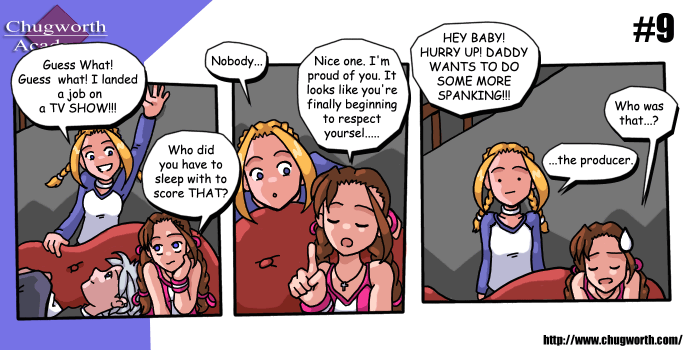 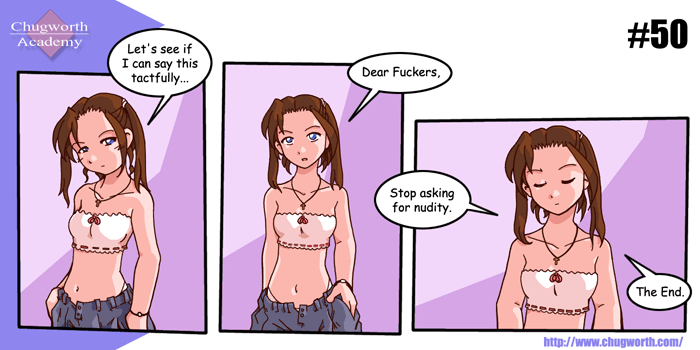 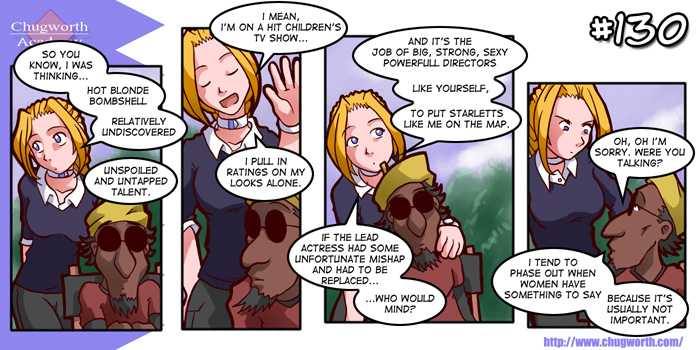 There. Now we're all up to speed on what a flaming shitpile Chugworth was.

Now, Cheung is making an effort to move his work in a new direction with Boss Noodle, but it's the same horseshit all over again in a shinier package. Non-existant plot and stupid dialogue. Even the stupid sex jokes show up to the party, but in pointedly less frequency (so far). Shamefully, years have gone by since Cheung put out the last Chugworth strip and he hasn't improved at all.

The biggest failure is that Cheung thinks he's telling a story here. He's not. 24 pages in and I barely have any idea who these characters are or what their motivations are (besides rape and violence). Cheung has an opportunity with Ms. Meth-head to flesh out a character who isn't motivated by foul deeds, someone who's just trying to live an ordinary life, but he fucking blows it by making her dumb as a box of rocks. While it may be too early to say, I believe Cheung will not get better. He's been working on comics for at least six years and THIS is the height of his ability. Dave Cheung will never be a good writer. His interests are simply too base and vulgar to get any meaningful storytelling done.

Based on his work, he's a pervert and a douchebag, and overly self congratulatory about everything he does. He's evidently trying to make an effort to improve on his art and a tiny smidge on his writing, but anyone who tells him that this work is "good enough" does him a great disservice. This shit is not good enough. This shit is terrible. And Cheung's fucking delusional if he thinks otherwise.

This comic is off to a fucking terrible start. It's an action comic that's really inept about showing action. How fucking stupid is that? Plus the dialogue is terrible and the character designs are nothing short of appalling. Let's look at Cheung's checklist of goals one more time to see if he actually met any of them:

Bullshit. All 24 pages are pointless.

A character kicks in a door wearing a frock that wouldn't show up in most strip clubs and opens with simply "Hey." And this is interesting?

Didn't hit that one either since each of his main characters is a walking farce.

Okay, yes. Out of the three subchapters he's put out, two of them have action. However, none of is any good.

No, these are neither ladies nor lovely. They are skanks and are dressed/treated completely as such.

There it is. By Cheung's own yard stick, he fails. Cheung needs to quit working on this beast pie and accept what he really is: a pornographer. There's no point in being on a high horse when one's output is so very low.