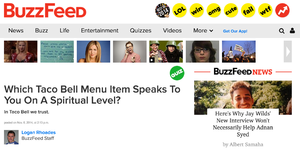 If you've never seen a BuzzFeed article before, this is the bar they set.

We all know what it is. It's the utter bane of social media; complete banality masquerading as fresh and trendy content. The inventor of Clickbait and listicles. Endless personality quizzes. Articles composed primarily of sassy gifs instead of a substantive point. Countless videos that are variations of "Questions for White People/Straight People/Men" that pretend to be socially conscious but are just asinine and smug. It's the worst combination of pretension and insipidness, made all the worse by how aggressively it will pop up on your Facebook feed. Just saying its name can cause people's blood to boil.

...Okay, that may be a bit hyperbolic, but its a fact that a lot of people hate BuzzFeed. Why am I mentioning all this? Because BuzzFeed likes to farm out for content (that is, when they're not getting caught with plagiarism), including - you guessed it - webcomics. And this particular webcomic, Books of Adam, seems to epitomize everything terrible about the website itself. I can't think of a more fitting analogy for study.

On the surface, nothing about Books of Adam immediately pops out as terrible; one glance and you might conclude that it's just a mediocre webcomic meant to fill time, nothing special. But that's the problem. Reading Books of Adam is a war of attrition. Every tiny little gripe builds up over time into something that, taken together, becomes quite obnoxious. You'll see what I mean as we delve further.

I'll just get this out of the way: Adam's a good artist. He makes good use of color theory and shading. His linework's great. His backgrounds are nice. He can draw anatomy pretty well. He's also the only webcomic artist I've seen who frequently uses gifs in his art that work well enough to emphasize things that wouldn't work as well in static images.

There is one massive, massive problem with the art that cannot be avoided.

Do you see it? 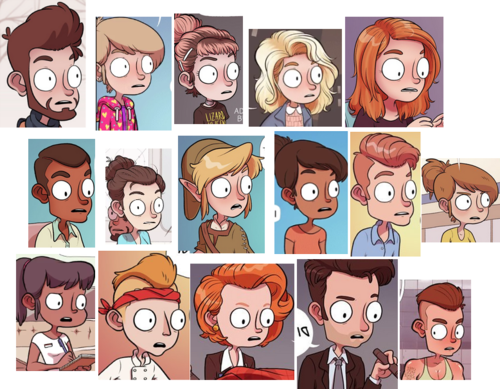 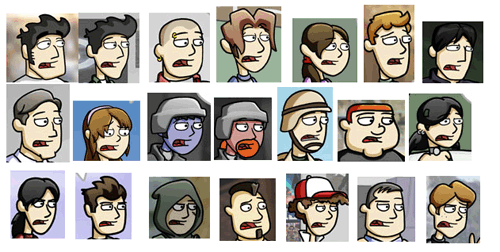 IT'S THE SECOND COMING OF CTRL+ALT+DEL!!!

Adam may be a good artist, but he is also a fundamentally lazy artist. We know that he can do better than this. Don't get me wrong, it's fine if he wants to do a cartoony look most of the time; Calvin & Hobbes is a great example of playing around with style for effect. But because BuzzFeed is a content factory, Adam opts for the path of least resistance and has crafted his own version of the infamous B^Uckly face. Not only does every character have the exact same face, they also have the exact same expression: dull surprise. The only variations you get are eyebrow positions, and maybe a slightly different frown. Its extremely frustrating to look at. And the completely repetitive nature of these faces just perfectly reflects how BuzzFeed as a whole makes me feel: annoyed, and empty.

And that's just the beginning. You know how B^Uckly mainly used templates and copy-and-paste to make his comics? I highly suspect Adam does the same. And I'm not just talking about copying panels from the same strip; I'm talking about copying across strips. Compare these three strips. Of the three, two of them have a recurring character, the redhead with the bun. Notice how those two are identical in pose and appearance? Furthermore, notice how all three have the same hand position? If you need more proof, take a look at this: most of the time the body is out of frame, but for the few times its in full view, it's always the same slouching pose, same clothing model, only different colors. This is strong evidence that Adam makes liberal use of the B^Uckly method of drawing, which is something you might not pick up on right away if you're distracted by how similar he draws everyone's faces. But really, that should've been your first indication that something was up.

Now, the obvious counterargument is that these work-saving techniques are so that he can make animations more easily. Well, I have a few objections to this line of reasoning: 1. Only some of the strips have any animation at all, and 2. Any animation that's included is usually limited to a few frames of motion for only a couple of body parts (head shaking seems to be the most common one). In that particular case, I wouldn't be surprised if he had canned animations as well.

Lately, Adam's laziness has become quite blatant. Here's a few examples where the same joke is not only recycled, the art is pretty much recycled too.

The first example is the only one that I can directly confirm; the "duplicates" for the second and third examples may have been deleted after Adam started getting flak for it. The first and second examples just slap a newer head on top of the old strip and given a slightly different shade of color. Some of Adam's fans claim that he's simply being "on-model" and consistent... which is like saying tracing your own work is on-model. Being on-model simply means that your proportions and positioning are consistent even though you are redrawing a character each time and at different angles. It does not mean copying and pasting elements and making minor adjustments. 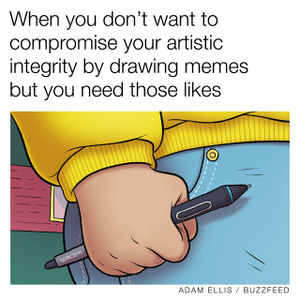 Trust me, it's not the memes that are hurting your artistic integrity. Though they don't help, either.

Being a slice of life comic, and perhaps autobiographical (assuming the "Adam" of Books of Adam is an author avatar), there isn't a plot so much as "this is what happened to me today" / "'humorous' observation about something I noticed" / "take pity on me for how much of a self-loathing idiot I am." No, really, that's a frequent theme. Which is unfortunate because the comic is focused almost entirely on Adam, and any other characters who appear don't get fleshed out much. What little we see of them seems to reinforce the comic's ham-fisted (and occasionally smug) nature.

There's not much I can say about the writing since the jokes are pretty shallow and rarely get anything more than a chuckle. At worst, the punchline doesn't make any sense at all. Well, unless you like "LOLRANDOM" humor. Furthermore, the subject matter tends not to drift far from the aformentioned subjects above, although there's also a fair amount of pop culture reference jokes, which I generally do not enjoy as they depend on you being "in" on the joke; for example, I can assume that Adam's favorite TV shows (due to the frequency they come up) consist of RuPaul's Drag Race, and America's Next Top Model - two shows I've never watched. I'm sure BuzzFeed's target audience loves them, but I still believe a joke works best when it can stand on its own merits.

The guy even somehow manages to make classical Loss edits unfunny. He is like a black hole of humor. Even B^Uckly, for all his other failures on that particular strip, implicitly understood that no dialogue was better.

Anyway, if you thought the art was repetitive, the jokes are too. You can only do the "expectation vs. reality" joke so many times before it becomes predictable and boring. For example, here are three variations of the same joke about halloween costumes.

Also, if this is Adam's attempt at being self-deprecating, it doesn't excuse the fact that he still cuts corners. At all. It also comes off as incredibly ignorant towards the technical limitations that spawned recolors that were received fairly well, whereas he has a wealth of resources to make his work great but fails to. Doesn't that sound vaguely familiar?

As stated before, the comic appears to be somewhat autobiographical, but aside from the frequent references to his insecurities I'm not going to draw any conclusions about the real-world Adam Ellis from this comic. Anyways, I was originally under the impression that Adam simply wrote comics for BuzzFeed, but nope. He's a bonafide staff writer as well ('writer' in this case is being charitable). Huh, that really puts into perspective how his comic is the pure embodiment of the website. From what I can tell, he's been around for a while, but didn't start publishing comics on the site until April of 2015. Since then he's become a regular artist for the site. The only other thing I could find was his actual autobiography about trying to find work after leaving Art School, but as far as I can tell it has nothing to do with the comic despite sharing the same name.

Adam has a weird habit of taking his "hilarious" shirts from his comic and selling them online. I imagine that he would not be able to do this without BuzzFeed's market exposure, because I highly doubt that the general public would be interested in such shirts as "pizza kween" or "gravy daddy" or "lizard kween" or "crystal daddy"... are you seeing a pattern here?

Lately Adam's started to receive some of the same criticism that B^Uckley had to deal with, and unsurprisingly, he did not take it well. While it's not uncommon for someone in his position to say "I'd like to see you better!" he kind of threw fellow artists under the bus when he mocked artists who depend on commissions. NOTE: Adam claims the AMA was fake and perpetrated by a "troll" as his personal Reddit account is adamtots as opposed to AdamEllisBuzzfeed. Considering the latter was only created for the AMA while his personal is over 6 years old and linked to prominent posts, as well as the AMA's writing style being noticeably different from his usual, it's plausible. What's odd though is that the above link doesn't mention this, nor in the followup post.

He also has a podcast called "Better Friendship through Podcasting," which I'm not going to bother with. It's just him and his BFF talking about whatever. So basically just more of the same from the comic.

If you're a webcomic artist and you're being offered a job at BuzzFeed, turn them down. It'll only hurt your portfolio.

I decided that a follow-up was needed given how things have changed since this review was first written. Adam left Buzzfeed back in early 2018, and funnily enough, his comics seemed to have improved as a result. The style and format haven't really changed at all, but there does seem to be a bit more effort put into both the jokes and structuring of the panels. He did another take on Loss, and it actually worked this time! It's not a complete change, but I'll take any improvement I can get.

Before leaving Buzzfeed, however, he started this really bizarre thing on twitter where he claimed to be haunted by the ghost of a child with a deformed head. At the time I thought it was just a mediocre attempt at getting twitter clout by doing creepypasta, but apparently, Buzzfeed Studios had promised that they were going to make a movie out of it. And some people actually thought that the ghost itself was real. Of course, once Adam did leave Buzzfeed, literally nothing has come of it.