I originally found out about the works of Mr. Hiwatari through the article on this site by crookedglasses dedicated to Ki’s Webcomic Contradiction. I loved the article so much that I HAD to check out the comic, and it is still one of my favourite articles here. However, when I finished reading the comic, I couldn’t help but feel a twinge of sadness after such entertaining insanity. Either that, or it was indigestion. But, lo and behold! In the sidebar is a list of other comics by this insane little mastermind! And so, out of morbid curiosity, yearning for the insanity that was Contradiction, and a bit too much boredom, here is my binge read of Hiwatari’s Other Comics!

Also, I think it’s worth mentioning that this comic appears to have been done for the 55th CFCC in Hong Kong ComicFans magazine. Mr. Hiwatari apparently “Got into the finals, but I did not win <_<”. I can see why.

This comic’s downfall was that it was made for a contest. Everything about it feels rushed, even by Mr. Hiwatari’s standards. This fault is completely understandable, however, I doubt this story would be any good even if Mr. Hiwatari got a chance to flesh it out properly…well, as much as Mr. Hiwatari would actually flesh things out.

We begin with a bubbly ditz talking with this dude, who is actually a chick if you read the comic’s description. What is with Mr. Hiwatari giving away spoilers on his own comics? Anyway, Little Miss Crossdresser receives her payment for the date these two will be going on later. And they told me that you wouldn’t become a hooker if you stayed in school…

Little Miss Crossdresser shows off her earnings to some guys on the second floor. What, are they in on this too? Apparently not, since this comic’s Hiwatari Stu stares disapprovingly at the situation. Anyway, Little Miss Crossdresser's Mom seems to be perfectly fine with her daughter being a hooker on the side, and the plot twist is revealed (if you didn’t read the description)! Insert Ouran High School Host Club Joke Here.

Little Miss Crossdresser then flashbacks to explain why she’s taking advantage of the rich. When she was a kid, the Mayor’s Daughter’s Bodyguards beat her up and left her for dead. (Oh, and the Hiwatari Stu was there for some reason as well.) Thus she decided to get revenge by scamming rich girls instead of investigating why the police don’t exist in this universe.

Like a true Shounen Protagonist, she goes onto the roof to angst, only to find the Hiwatari Stu beat her to it. This guy is Yakaze, a guy who somehow became student council president without learning any basic social skills. He pecks our protagonist on the cheek without provocation, and Little Miss Crossdresser doesn’t report it in fear of exposing her own shady behavior. 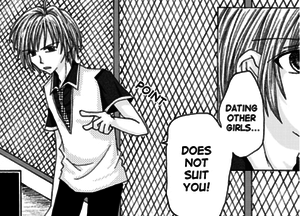 "Don’t be straight! We want YOU to go out with ME." 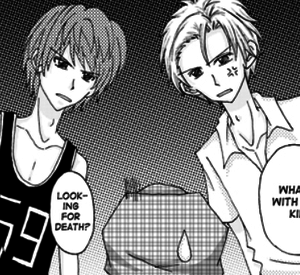 "You just missed him. You might be able to catch him if you start running!"

Distracting use of awesome Photoshop Brushes aside, it looks like a fight is about to start. Our protagonist is cornered, the tension is…not as high as it should be, but whatever. This random thug winds up for a punch…only to be kicked by somebody who is off-panel. Okay, yeah, if you’ve read my other entries in this marathon, you would have known that Mr. Hiwatari can’t do fight scenes, but this was just a cop out!

So, after a couple of panels showing off “how cool” he is, Mr. LackofSocialSkills calls the cops on these nameless thugs. Okay, two problems with this…if you were just going the cops to begin with, then why did you kick and elbow the thugs? If the cops DO show up in time, then you gave these guys just as much dirt on you as you have on them. Second, WHY DIDN’T YOU CALL THE COPS WHEN A GROUP OF ADULTS BEAT LITTLE MISS CROSSDRESSER UP, PRESUMABLY YOU TOO, AND LEFT HER TO DIE BY THE SIDE OF THE ROAD?!

Mr. LackofSocialSkills then admits to stalking Little Miss Crossdresser, and then tells her to stop going on dates anymore, because he’s going to “buy all of (her) time”. She’s his hooker. It’s official. Okay, prostitution jokes aside, it really bothers me how he’s like “Don’t go on dates anymore! From now on, you’ll do what I tell you to do!” Oh, by the way, that’s exactly what she does—she grows her hair out and becomes his full time gold-digger, I guess. The end.

It’s a Hiwatari Comic, what do you expect? But I do want to harp on a recurring trend I’ve noticed.

Most of his comics, so far, have focused more on a character’s financial, academic, or social standing, rather than actually developing them as a character. In this comic, I barely know anything about Mr. LackofSocialSkills from start to finish, but right off the bat, we’re told that he’s student council president, he comes from a rich family, and that his grades are pretty good. Okay, I guess that gives me a bit of insight into his character, but none of these things really matter in the long run. (Except the wealth aspect, which allows him to “buy all of (her) time”.) Likewise, look at Little Miss Crossdresser: She’s of poor financial standing, so she crossdresses to take advantage of the rich bimbos. Apart from a bit of bitterness, I really can’t describe her personality.

Looking back, a lot of Mr. Hiwatari’s other comics revolve around some (financially) poor underdog going up against a rich love interest. The comics usually come to an end when the main character gets together with the love interest, thus ensuring their financial stability. I think the only exception to this rule was Sara from Oshietekudasai, but while she came from a rich family, she was doing poorly academically, thus why she got together (kinda) with Shin—a guy with good grades, but low income.

Really gives you a bit of a window into what Mr. Hiwatari values, as a person, doesn’t it? 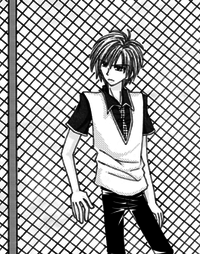 "Hmm… It seems this chain link fence has melted my fingers."

This comic has all the proportion issues found in Contradiction. In the interest of not repeating what crookedglasses already said, I’m going to focus on a different aspect of the artwork. Mainly, the Crappy Character Designs.

Actually, I don’t need to do any commentary for this section. I’m just going to let Mr. Hiwatari’s Artist’s Comments on this picture speak for itself:

“Character design for this one-shot. Basically I just draw whatever design that comes to my mind first, and then use it. I don't spend a lot of time designing characters for one-shots (I draw too many one-shots...) <_<”

I don't really have anything to say that I haven't said already about Mr. Hiwatari. If you want to know my opinions, then read the Le Diable and My Sparkling Prince-sama reviews. 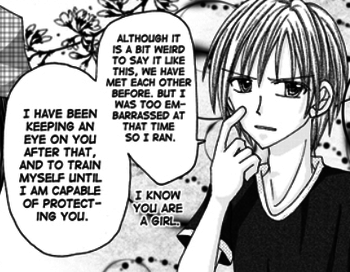 "I’ve been training to, uh, protect you! And I’d totally never use my powers to force you in line or anything!"

If you've read any of the other entries in my Hiwatari Ki Comic Marathon, then you know exactly what to expect here. This comic really doesn't do anything new, and it's mostly forgivable due to it being a contest entry.

But I think the main thing that bothers me is how Little Miss Crossdresser comes across as this independent woman who is doing what she can to beat the system, only for Mr. LackofSocialSkills to tell her to stop, and she obeys him without question. Sure, scamming the rich girls was underhanded, but at least it was something she decided to do herself. This ending…just…auuuuugggghhh.

Again, I know this comic was rushed to meet a deadline, but even if it wasn’t, I still wouldn’t like it.

UPDATE: Hosting site Smackjeeves is now defunct, and so is this webcomic.