I don't remember exactly how I found Black Jade. I was probably visiting a webcomic site, clicked a random banner ad and was instantly transported to this merry-go round of eternal pain and suffering.

Day one. This comic started at the event horizon of a black hole, and we (the viewer), like Laurence Fishburne, are locked in melee combat with Sam Neil and slowly being dragged into Hell. 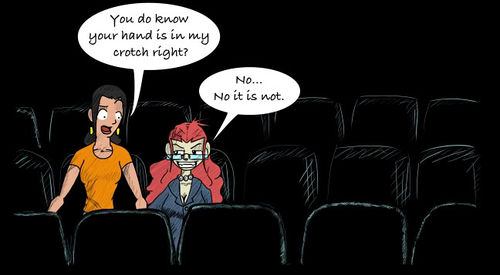 Ah, the behavior of the average lesbian as told by a fourteen-year-old boy.

Black Jade is about an extremely unrealistically horny lesbian mad scientist named Jade. Jade is so horny, in fact, that she develops a "ray gun" that turns straight women gay. This gun has only been used once in the story, and the woman it was used on instantly became Jade's lover. The author never thought past lezbos are teh haaawt! and has continued to excavate a monumental crater of failure in an attempt to generate income and avoid getting a job. Jade is a mad scientist/evil genius with no purpose. She kidnaps women to turn them into lesbians (as opposed to going to a gay bar), she hires henchmen but has nothing to hench. She has no enemy or apparent grand/evil plan. Her friend Sink (yes, as in kitchen) encourages her "evil" behavior and does random evil things himself, like implying that the meal he's eating is puppy and feeding chicken to a bird... sooo evil. The rest of the story is just a long string of random tangents, unfunny jokes, and other situations either inspired or blatantly ripped off from the Venture Brothers. All of this is supposed to equal lulz... oh yeah, and money... the author REALLY likes money... a lot.

The art is probably on par with The Wotch, which is to say it's God-fucking-awful. The "artist" Steele Snover (maybe real name, maybe fake) has no concept of any of the basics of illustration. Perspective, foreshortening, and proportions of characters are all terrible. His use of line is shaky, uneven, and amateurish. Hands appear to be his weakest point. He goes for either spatulas, or something that looks like a ribbed condom. 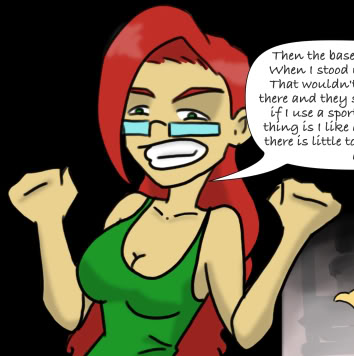 Duplicate Jade's pose and tell me where the thumbs should go.

Snover's work looks like it was created using MS Paint. The coloring is something like a 5 year old with Parkinson's disease after downing several cups of coffee. He then moves to Photoshop as can be seen from the layered color... the author still colors outside the lines and the art doesn't really improve per se, but he does add kick-ass glow effects!

His backgrounds started out like a blotchy finger painting and later they become nothing but color smears run through a blur effect. The best part of all of this is that he actually wants people to PAY for his shit:

I'll make you all a deal, for every $800 I make in donations, I will add and extra day of updates the following month (added to the 3 days a week). So if I get $1,600 in donations in July I'll update 5 days in August, if I make $800 in August I'll update 4 days a week in September. Get it? Good. I'll post how we are doing on donations on the right hand side click it to donate, imagine that! Also if you like the comic, show me your love by paying me. Come on I know you all have pockets of expendable income laying around. So why not send me all that extra money you have, I have student loans that need paying. So keep reading and be happy...

If I lived in the DC Universe, I'd have let out an animalistic scream. A red power ring would descend from the heavens and speak to me, "Rynoth of Earth, you possess great rage." My blood would be replaced with super heated plasma that I would then vomit all over my monitor before flying outside and violently head butting everyone from here to Snover's house. 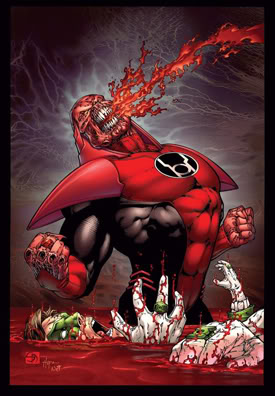 There is nothing inherently wrong with making money with your webcomics. My problem is that Snover is following the formula of the money grubbing whores from Cool Cat Studios, as well as the douchebag that draws Exiern. Attract men or the gay community with lesbians or gender bent protagonists; ensure that you have zero storyline and no character development; include or promise tits, and then fleece your audience. The problem that a lot of webcomic artists need to understand is that their audience is their life blood, and I'm not speaking just monetarily. They read your work, they discuss your work and even have the potential to form a community around it. Your readers can spread word of mouth to attract others and later they can buy your wares or give you money showing their appreciation for the story you give them. It is because of all this that they deserve an immense amount of respect because, without them, you are performing a play in a vacant theater. Snover blatantly shows his lack of respect by asking for money as if he's entitled to it, and he does this after only six fucking pages! Fuck you Steele Snover.

The writing is shit. He attempts to make sarcastic, dark jokes from his characters but they all fall painfully flat. Jade shouldn't touch random girls on the crotch; Jade's friend eats puppies; Jade fired her sex bot; it's all retarded.

Spelling isn't his strong point either. He makes quite a few spelling errors in both the comic and his news posts (as seen in the quotation above). Really? It's called proofreading, you dumb fuck! Snover seems to either dislike or just refuse to use basic contractions. This makes a lot of the dialogue sound fake or forced. Dialogue is a huge part of comics, and none of his characters communicate to each other in a way that normal people would.

I did my best to find information about Steele. Comixpedia and Wiki didn't have anything, which isn't too surprising considering that his strip is fairly new. All I know is that he's from Colorado, and from what I've inferred from a news post, he is an art major. God, the irony is delicious.

There is nothing redeeming about this webcomic. It is nothing but an unoriginal, arrogant prick's get-rich-quick scheme. Rule #1: If you're going to sell-out: HAVE TALENT!

Update 3/30/10: I recently did a search on Google for "Black Jade comic" and came across a news post on his front page.

Midgear (aka: douchebag creator): If you hate me for not updating, I could give a shit. I'm making a video game here, I have no time to do a comic I don't get paid for. So I'll update whenever I darn well want to.

I can only describe my current mood as pure, unfathomable joy. Not since I discovered that Midgear had read this article have I felt this happy. The comic has not updated in over 3 months. I think the above news post serves as a reminder of why we are here.