If you've been reading this site for awhile, you may have noticed that the length of a Bad Webcomics Wiki article is inversely proportional to how bad the webcomic is. The worst webcomics tend to have very short articles, while mediocre but not-so-bad comics tend to have very long articles because the author has to work harder to convince you, dear reader, of the particular (de)merits of the webcomic he or she is reviewing.

This webcomic review shall remain true to that general rule. I don't want to waste your time convincing you of something you already know. I mean, c'mon, when a webcomic's storyline literally boils down to the author intoning "JEEEEEEEWWWWWWWWWWWWWWWSSSSSSSSSSSSSSS" like Dracula attempting to work a victim into a suitable state of horror, only in a more over-the-top and vaguely condescending way, the webcomic doesn't have a fuckin' chance.

There is no downfall if the webcomic starts at the bottom of the scum bucket.

Let's pretend you're a young Jewish boy. Unless you're an actual Jewish boy, in which case just be what you are for a second. Now pretend you're out to uncover the secret evils in your Jewish family, which is assimilated into a kind of surreal Jew Mafia, like the Mafia Darci Robbins wrote of in La Cosa Nostra only far more Jewish and far less realistic. Unlike your brown-haired brown-eyed big-nosed Jew relatives, you are a small-nosed blond-headed blue-eyed vaguely athletic boy. What do you get?

If you said "neo-Nazi propaganda piece" then you are absolutely correct! Because that is what this webcomic is. That is all it is. In literally the second strip the boy refers to his sister as a rat with glasses which is (one would suspect) a knowing reference to the Jewish mice in Art Spiegelman's Maus. Only assuming that this is a reference to such a complex work of art would be assuming that the menacingly Aryan author of this pile of garbage could read, so I'm going to take Door Number Two and say he just picked the most disgusting animal he could think of and went with it.

I always wonder why these propaganda works are so fuckin' bland in terms of story. They have these messages of secret Jewish conspiracies that are helping out "the fags" and "the kikes" and "the lib'ruls" and then they have the blandest, most mundane storylines possible. Where are my secret holding pens? Where are my secret Jewish underground compounds surrounded by armed guards where they keep political prisoners? Where are the aliens? Where in the fuck is the entertainment value in watching an Aryan stereotype talk condescendingly to Jewish stereotypes for forty-something strips?

Unfortunately, aside from the anti-Semitic propaganda, the writing is peachy compared with what we're going to discuss in the 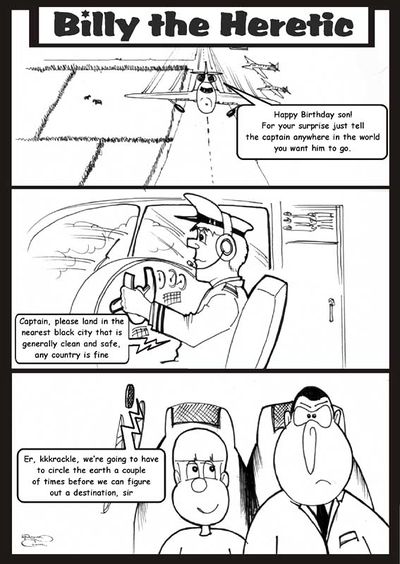 For a change, the webcomic isn't attacking Jews.

... Because where the storyline is bad in its so slavishly and blandly depicting various stereotypes, the art is terrible in exactly the same ways. Only it's worse because you have to look at it, where you can just skim over the word bubbles.

Here we see the husband holding on to a garbage pail lid, talking to a disembodied head, while a young child plays with Unknown Video Game Device Slash Bizarre Transformation Object in the backseat. I think it turns young children into mice, because by the third panel this child has developed a Mickey Mouse nose, where he's got a little circle where nostrils should be. The line underneath the eyes indicates a snout, the ears look as if they're attached to the child thing's cheeks. The only other thing it could be is if between panels two and three the family had a great time at Disney World and bought young Billy a pretend nose so he could emulate his idols, however a man with the racial/ethnic beliefs of the creator of this webcomic would not depict a Jewish family spending money so freely, therefore he must be playing with a transformation device. Either that or he's a furry. You pick.

It sort of reminds me of Pinocchio being sent to Pleasure Island and turning partway into a donkey. Which is apt, since Pinocchio was an obnoxious little miscreant prick, and he and "Billy the Heretic" are both bullshit-tellers and probably have noses that are at least twelve feet long apiece from all the ridiculous bullshit they've spewed. But Pinocchio's bullshit at least makes sense. I'm still trying to figure out what this "heretic" (apparently the writer's term for "neo-Nazi") is saying in half the strips.

But, oh yeah, the art. Speaking of which: Comic Numero Cuatro sets a new low in art. Seriously, what the fuck is wrong with Daddy's toes in Panel Three? Why are his arms connected to his pectoral muscles in Panel One? Why does the son's right leg become dislocated in Panel Three? Bah. The shrubs are nothing but squiggles in a zigzag line, there are clear pencil marks all over the place, it looks like something a third grader would draw, and it's still a pile of racist bullshit.

In Billyland, mirrors float, there are no clouds, trees, bushes, or recognizable horizon lines, inner-city ghettos are within a conversation's distance of dairy farms, Jew noses are bent literally all the way down to the mouth, and we see a welcome return to Aryan mouse nose territory because the creator of this abortion is incapable of drawing nostrils or even a recognizable nasal bridge. It's not that fucking hard, you anti-Semitic jackass douche. You draw a couple of nose holes, then a couple vertical parallel lines for the bridge, I mean come on, you have to have at least looked at somebody. Even if you're going for the "racial stereotype look", surely you can draw the nose to look at least vaguely human. Right?

So if I were to present you with a webcomic that was extremely hard to read and understand, yet was espousing simple, one-liner ideas and was political and yet still united almost everybody in hatred against both the author and the webcomic, it would be reasonable to say that this writing is so irredeemably terrible in every way that it was... well, irredeemable, am I right?

This webcomic presents a viewpoint that can literally be stated in one word: JEWS. That's it. That's all there is to state. Just put the word JEW in big 90 point letters in some suitably evil font, say Matisse ITC, with little bloodstains on it, maybe add a little Star of David. There's your entire webcomic. THAT'S ALL THERE FUCKING IS DAMMIT.

And yet this webcomic is almost completely unreadable. Here we have a Jew lighting a Menorah in front of the White House, saying he's doing it to remind people of how Jews are persecuted without cause. I do not understand this webcomic. At all. It is beyond understanding. Is he saying Jews control the White House and therefore they have no right to complain about being persecuted? Is the author seriously saying they have no reason to complain that six million of their people were gassed, burned alive, tortured, hung, beaten, and murdered simply for being Jews?

After reading this webcomic, I have learned that Jews are secretly gay and are furthering the cause of gay rights to better fit in with society; that Jews should have shared a soup bowl and a poop bowl during the Holocaust; that Jews needlessly raise the salaries of minorities; and I have no idea.

That's all I can say. I have no idea what is going on in this webcomic. It's not satire, it's not politics, it's not science, it's not socially-minded. It's completely nonsensical and pretty much completely insane.

The writer is an American neo-Nazi living in somewhere in Michigan; the artist is an Irish White supremacist.

Billy the Heretic is undeniable evidence that all anti-Semites are mentally retarded and incapable of basic qualities like speaking coherently and being able to string together a full sentence without including some kind of mention of the evil Jewish conspiracy. His webcomic is at the level of a third grader, his writing is lower, and his arguments are inane, empty, sophomoric, and detached from reality even by the standards of Holocaust deniers. I think many illiterate Klansmen could write more convincing and logical arguments than "Billy", if they could figure out how to actually operate a computer, and it is without question that this is the worst propaganda webcomic ever made. Worse than A.W. Mann, worse than Jack Chick. So, can I reccomend Billy? Not really.