A BWW forum thread pointed to a list of possible webcomics for review. I clicked on this title at random, and just from seeing one strip concluded this was potentially review-worthy. Reading a few more strips changed the adjective to "definitely".

The story opens with two engineers of Cincinnati Design Engineers Design Group 6 who turn out to be fighting pals. Ordered to train a new employee, they describe their past to her, and even invite her to Cincinnati Bockfest.

OK, a couple of problems right off the bat. For one, it's difficult to believe a new, inexperienced employee solving in one night a software problem that stumped his employers for six months, simply by looking at it backwards. (Other engineers would not have already thought of that?) Is this supposed to be like the movie Good Will Hunting, about a college janitor who is secretly a mathematical genius? Not necessarily, but J. J. does sound suspiciously like a Gary Stu self-insert by the author. Also, I can tell you that an invitation by two male employees of a female trainee to an outside event might be considered inappropriate by an employer; my own employer has specifically trained us about this. But moving on:

The two best friends are having a restaurant meal when J. J. spots an attractive waitress named Liana at the restaurant, and a day later J. J. asks her on a date and she gives him her number. Turns out to be for real. They become close enough where J. J. is willing to tell Liana about his family problems. At a later stag party for one of the company workers about to get married, none other than Max Black Rabbit's character Zig Zag is a performer. But she does not merely make a cameo appearance; the author goes so far as to make J. J. and Zig Zag blood relatives. (Second cousins, as explained beneath the picture.) But despite this fact, and the fact that J. J. has started dating Liana, Zig Zag and J. J. end up having a sexual relationship, and on top of that, Zig Zag says that it was the first time she ever made love as opposed to just having sex. I cannot decide which is creepier, the incest or the fact that the great Zig Zag finds the author's self-insert character the best lover she ever had.

We learn Zig Zag's "real name", at least in this scenario-and it turns out she hates it being used. But J. J. still has his budding romance with Liana, and in any case Zig Zag's anger is short-lived. Shortly afterward the two of them go on a roller coaster ride together and afterward Zig Zag and Liana meet at a dinner and the two of them seem to get on.

Later Zig Zag and J. J. briefly visit J. J.'s mother in Tennessee and J. J. returns to work and has to train an intern and afterward takes Liana on a riverboat cruise in Tennessee, but it's abruptly back to work again. Then the gang have fun at Oktoberfest and J. J. and Zig Zag go on yet another roller coaster ride, but shortly afterward Zig Zag has to fend off an overzealous fan.

Halloween arrives, and Zig Zag invites her relatives over, but an unexpected unpleasantness occurs. Fortunately J. J. defuses the situation. Later comes Thanksgiving when Liana and her relatives visit J. J. and Zig Zag, but unfortunately afterward J. J. and Zig Zag confess their sexual relationship to Liana, which unsurprisingly upsets her. But Zig Zag would soon visit Liana to try to salvage the situation and shortly afterward J. J. and Liana meet and they quickly make up. (Duh, you'd think that J. J. and Zig Zag would simply have never mentioned their sexual relationship to anyone else in the first place, let alone Liana. What logical reason was there for doing so?) Then J. J.'s younger brother, an Army private, returns home from Germany for Christmas, but he makes a bad impression on Zig Zag. Then follows Christmas and then New Year's Eve and finally the one-year anniversary of this webcomic. The saga continues, but I don't care to read another page of this tripe. I've seen more than enough.

The webcomic's art is a combination of late 2001-era 21st Century Fox badly-drawn furries with the reuse of pictures a la Stalag '99 and the tracing and copying of Project 2nd. If you think I'm exaggerating, take a gander at this strip: 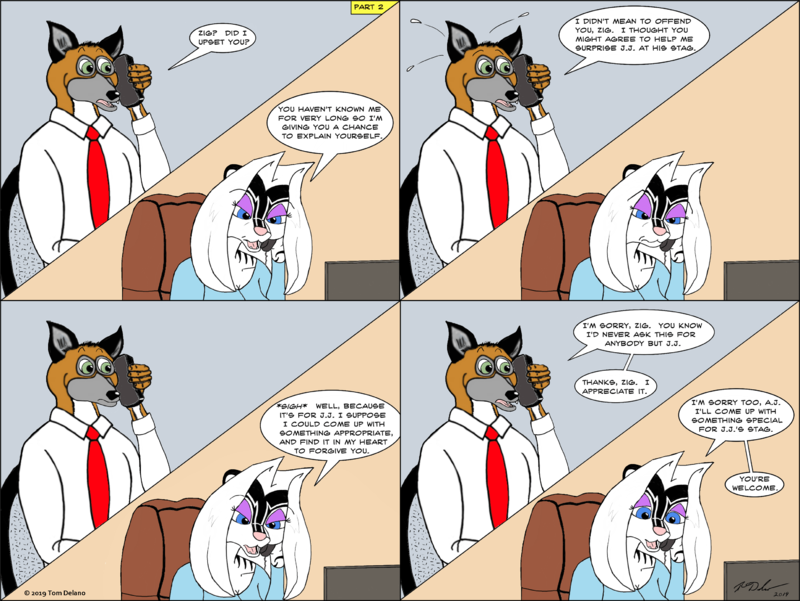 It's bad enough to see just one of these pictures, let alone four in one sitting!

As the above strip illustrates, the artwork consists of line drawings with no shading or sense of depth and simple coloring, wonky and inconsistent proportions with thick bodies and overly tapering arms and legs and tiny hands and feet, as well as tails on some characters that look too skinny. On top of that is the fact that the author depicts motion the way a small child might draw it:

The author cannot even depict the collision of two bodies properly? Sheesh!

At the moment of collision, the two characters are not even against each other like they are supposed to be. The characters are also stiff and have no sense of animation and note the different tail lengths of the same characters in the two pictures.

But by far the worst aspect of this webcomic is the fact that the author often uses the same fucking pictures of characters over and over again, and simply changes expressions slightly and moves the characters around in each frame to try to disguise the fact. Sorry, Charlie, it doesn't fool anybody, and it suggests you are too fucking lazy to put any real effort into your artwork. If you don't feel your webcomic is worth adding any visual variety to it, why even bother doing it at all? Bad artwork is one thing; lazy ass repetition is unforgivable. 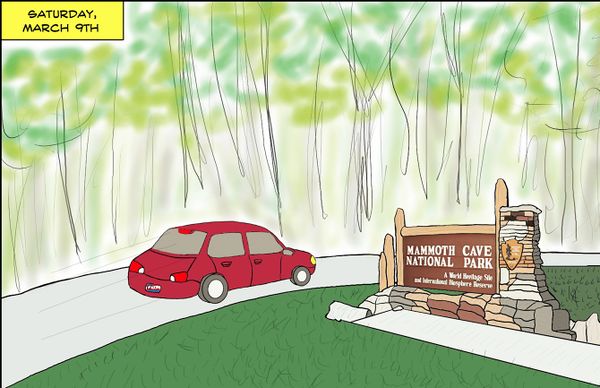 An example of the tracing the author does.

The story gets off on the wrong foot as described above, but it still could have recovered. Bringing in Zig Zag as a relative of the protagonist could have been developed into an intriguing idea...if the author hadn't spoiled things by their having a sexual relationship, supposedly out of love, but it is creepy by any stretch of the imagination. But the story really jumps the shark when Zig Zag and J. J. admit their incestuous relationship to Liana (for no good reason that I could imagine), and on top of that, Liana reacts by being briefly upset and then forgiving the whole thing. Sorry, I did not buy that at all. Any woman would likely have run far away from someone who engaged in such conduct.

And the rest of the story is basically an infomercial for various rollercoasters, hot wings, and special events in Cincinnati.

No mention of him or his webcomic on any furry sites, so despite his extensive use of the Zig Zag character, the author is still an unknown in the webcomics world.

The only redeeming quality of this webcomic is that Zig Zag is brought in as a person with a family and friends she interacts with, unlike the cookie-cutter wish-fulfillment stereotypical bisexual female sexpot who wants to have sex with anyone and everyone she meets as in Sabrina Online. Unfortunately, the author decides to have his self-insert character have sex with Zig Zag and have it be the greatest thing that has ever happened to her, and far worse, have a fiancé who loves him so much that she quickly forgives the fact that he just had had sex with his cousin. This effectively destroys any chance of this story being taken seriously.

What else is there to say? As described above, the art is awful and repetitive, the characters are unrealistic, the story moves erratically, and there is simply nothing to recommend about this webcomic.

UPDATE: I have a habit of looking up webcomics that I write reviews for in case anything might have happened with them that I feel might be necessary to point out. It seems that while this webcomic did have an audience who made comments about it when it first started out, in the years since then, the only person making comments about this webcomic is someone named "lids delano". Maybe I was not the only one who was put off by the cousin incest storyline. While I was at it, I also checked out the other links I listed. Seems that Tom Delano just cannot get himself an audience for his webcomic, and even the inclusion of Zig Zag as a major character hasn't done the trick. Yet the author keeps going at it, God knows why. J. J.'s boinking his cousin may be in the distant past, but otherwise this webcomic is as unattractive and boring as ever.