This was found by yours truly while searching for decent gay webcomics (a nearly impossible task, I can tell you).

The webcomic has been terrible from day one, but I guess if you really need a point in time where a more definitive downfall happened, it would be the first time it tried talking down in a super-condescending way to its audience. Which would be (November 24th 2013), because apparently, a person specifically looking up a gay webcomic on the internet wouldn't know that "gay people are totally like straight people, guys!" (Except of course for what they want to do with their genitals, as the late newspaper columnist Mike Royko had put it.)

There isn't a story per se, as every strip is independent from the other. However there are SOME constants in the webcomic and some minor developments.

Mark and Bart are a gay Dutch couple and the webcomic follows their incredibly boring domestic life. It starts with only Mark and Bart, but later new characters are added with the arrival of their adopted children. Both of whom, for some weird reason, appear out of the ether in a Twilight Zone fashion on (April 1st 2014) in what I guess could have been assumed to be an April Fool's Day joke. But considering they are still around in 2016, it isn't.

This was obviously prompted by the lack of inspiration from the author, whom I guess thought adding two random kids would freshen up the webcomic and provide more opportunities for funnies. (Spoiler: It doesn't.)

The webcomic mostly consists of the daily events in the life of Bart and Mark and the whole thing reads like someone drew out their 2002 LiveJournal entries. There are ways to write GOOD slice-of-life webcomics that makes them interesting but this webcomic DEFINITELY fails to do it. The whole thing is incredibly bland, and can be best described as being as pleasant as being bombarded on Facebook by that one rabid mom who posts non stop 'inspirational' pictures in between pictures of the furniture they bought for their kid's room. With the occasional post about Fifty Shades Of Grey.

It's basically Family Circus if the parents were gay men, and far left progressive instead of conservative, and if every five weeks the mom character took a dick up her bum.

The earlier strips were basically trying to establish the nature of the relationship between Mark and Bart. However Mr. De Graaf is not exactly the best writer, and instead of naturally establishing the character's natures through long-term passive exposition (by showing, not telling), he decides to go at it the "My immortal" way and DUMPS all that info on the reader straight away in certain postings. It would have been easy to make this more interesting by showing Bart coming back from his job as a bus driver in his uniform (like Ralph Kramden of The Honeymooners), or showing him at work and showing Mark doing his duties at that nursing home he presumably works at. But instead, the author decides that breaking the fourth wall more often than Deadpool does, and dumping that information on the reader in two panels would be a better idea. (Hint: it's not.)

One fascinating trend throughout the webcomic's run is that we're supposed to believe that Bart and Mark are a stable couple who are deeply in love with each other. However, there are so many instances where both characters aggravate each other that two years later you're left wondering why they haven't gotten a divorce already.

Another weird thing with this webcomic is how much it LOVES to preach to the choir. I mean on one hand you would naturally assume that this comic's target demographic would be gay people considering how much it advertises on other bad gay webcomics' websites and is listed on several gay comics lists. Plus the random gay sex scenes are DEFINITELY not targeted at the general public. ON THE OTHER HAND however, it regularly runs strips preaching tolerance and how gay people are just like straight people, how gay people are treated terribly in other countries and how you have to tolerate their existence and how gays are capable parents and how gay stereotypes are just that, stereotypes. SOMETHING A GAY PERSON WOULD VERY WELL KNOW FROM EXPERIENCE, OBVIOUSLY.

At first the preaching was limited to gay issues, but in recent times, the webcomic has becoming incredibly SJW-ish and started tackling oft-debunked SJW talk point such as the wage gap, some other times it will preach regressive-left unconditional acceptance of dehumanizing religious garments in the name of "progress". Then it will veer into "Body Positivity" territory and complain about how adverts use pretty people (as opposed to fat ugly ones) to advertise their products and how "impossible" it is to achieve this kind of physique (despite anybody regularly going to a gym being able to). The webcomic officially made its Tumblrina position pretty clear on February 6th 2016 when Mark and Bart's Twilight Zone son decided to go full SJW and got blue hair.

It also lets the audience know how Tumblrina-friendly it is by putting everything on the same "Trigger-scale". Somehow, Australia not yet recognizing gay marriage is as terrifying and deadly as Crocodile-filled rivers, Shark-filled sea waters, and venomous animals out to kill you.

This is too much sexiness for me, I'm going to faint 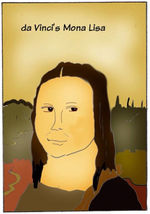 What Mona Lisa looks like, according to Mr. De Graaf

Oh dear, where to start.

The art in this webcomic basically reminds one of the stuff a young kid would draw. It is overly simplistic to the extreme. Barely one notch over stick-figures. Which results in terrifyingly bad illustrations.

Bart and Mark seems to be, based on photos, an inter-generational inter-racial couple. Bart is a white European guy and seems to be easily in his late-40's if not early 50's, and Mark is a Filipino man and seems to be in his mid to late 20's. Yet the art is so bad and so devoid of any details that Comic!Bart could easily pass off for an 18-year-old guy and NOTHING in Mark's design could point towards an Asian heritage (unless you count slightly tanned skin as Asian).

The flaws in the art style become increasingly obvious when the couple's fictitious children come into the picture. Harvey, the De Graffs's son looks like a dwarfed blue-haired clone of Mark, while Ellen, their toddler-aged daughter, looks like a worm had sex with Charlie Brown and she's the offspring.

There's no doubt looking at the webcomic that Mr. De Graff has no bloody idea how bodies work or what a body's general proportions are, with extremely stiff poses to weird walk cycles to bodies stretching and squashing for no reason, all of which can be seen in this December 29th 2015 strip.

The terrible art style becomes even MORE terrifying when the aforementioned occasional sex scenes or scenes involving nudity occur. The style is absolutely not conducive to sexiness and it only ends up looking like some pre-teen's attempt at depicting "what mom and dad do in their bed on Saturday nights".

The artist's poor handle on human anatomy or just basic art skills becomes all the more obvious when he tries to reference other artists' work or pop culture elements. How someone could FAIL to properly render a Minion is beyond my understanding considering they're literally anthropomorphic ear plugs.

Another complaint about the art could be the fact that Mr. De Graaf is either lazy as hell or doesn't know how to depict backgrounds since EVERY SINGLE STRIP is pretty much a page of evenly distributed panels (90% of the pages are 4 square panels) with a flat-colored background and no environment elements save for the occasional couch or bed. Which makes it sometimes impossible to know whether the characters are inside or outside in some instances. 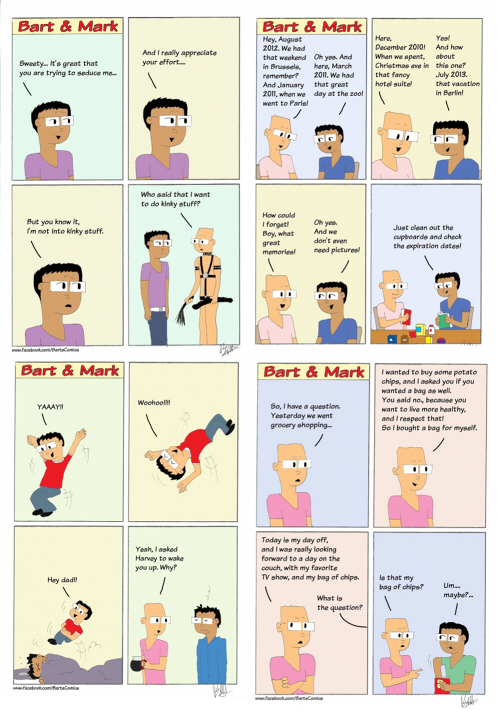 The question is, IS THERE actually any writing involved?

Because, like I mentioned above, this looks more like a disjointed series of blog posts in comic form than an actual cohesive story.

This comes across as a slightly childish fictionalized account of what Mr. De Graaf sees his life as being or in the case of the non-existing children, what he wishes it could be. The adult characters are bland and whiny for the most part and the children... Well, the children absolutely do not come across as genuine children. I personally come from a family of four children of several ages and personalities, so I have PLENTY of experience with how children would act and Harvey and Ellen are absolutely not acting like real children would. You have to wonder if Mr. De Graaf has EVER SEEN actual children because both of his fictional kids are terrifying abominations who either know too little about life or too much.

Why on earth a TODDLER would be aware of the existence of PEDOPHILES is beyond my understanding.

Otherwise the whole webcomic is either preaching to the choir about progressive values or somehow demonizing entire groups of people for their personal opinions. In fact the webcomic seems to follow a rather simple pattern: half of the strips will be about Mark and Bart's marital moments (either them fighting about some ridiculous shit or showing how much they LUUUUUURV each other), one quarter will be about Mark and Bart's fake kids being quirky, and the other quarter will be condescending moralizing content.

There is barely any character development or any changes in their routines, save for the random Twilight Zone children appearing in 2014 and sticking around ever since.

Not much can be found about Mr. de Graaf online save for the minimal information on his Facebook account.

However, it is known that he lives in Amersfoort, Netherlands.

That he's married to Mark Escuyos, who's originally from the Philippines.

That he has a strange obsession with Lego toys

And that despite the omnipresence of children in his webcomic, there are absolutely no traces or evidence of any ACTUAL children in Bart's real life. (Which , again isn't surprising from how he writes them.)

This is definitely one of the most mindblowingly boring and bland webcomics I have seen in my life. If webcomics had a taste, this one would be tofu. Moist, bland, and cold.

The art is ugly, the writing is abysmal, the pacing is absolutely ridiculously regular and boring. The whole thing is about as interesting as the Facebook timeline of your friend that had children too early in her life and never left that small boring town she lived in back in high school.

And on top of that, the artist somehow thought that being preachy would somehow help an already dying webcomic.