This story was always really shitty, but it took a nose dive when Kitten blindfolded the protagonist and her daughter so that they can have sex with each other. Then they take blindfolds off and continue to fuck. 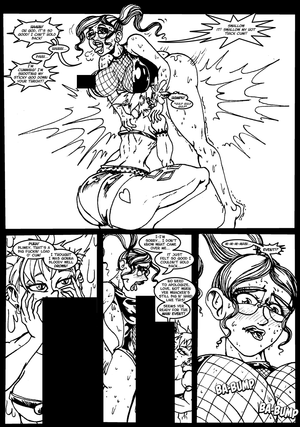 Well at least it passes the Bechdel Test.

Later, Victoria is at work and is having troubles with erections like usual. She sees Kitten and they go into the backroom, which Kitten puts a spell on her dick and they fuck. Oh so much fucking. Kitten leaves, and Victoria sees her coworker’s butt and forces her erection through her coworker’s pants and rapes her. Only the coworker likes it so it’s okay according to the story. Victoria then faints due to dehydration and we are now at the hospital.

Victoria is allowed to be back home and she decides to stop selling ‘banana’ crème. But she has a hard time controlling her erection and calls up Kitten so that they fuck. And then Kitten stops which makes Victoria want to fuck a cake. And then her coworker wants to be fucked. Have I mentioned all the fuckery? Victoria still cannot contain herself and Kitten decides to take her to school at night to show her to a glory hole where she put’s Victoria’s dick in and makes it cum so that the receiver gets ‘banana cream’ in her face and starts sucking. The receiver’s body change because magic and keeps sucking.

Later on, Kitten decides now is the time to enact the plan of the century. She gets Victoria blindfolded in the school and tied up. She then changes shape to lead her blindfolded daughter, whom I am calling Bambi, in the room and have them fuck each other, because they are both somehow virgins in spite Victoria having a child, and constantly fucking herself and other people. Kitten leaves the room to tell mother nun about what is happening. Victoria and Bambi take off their blindfolds and realize that they are mother and daughter! Which then they stopped immediately and think about the ramifications. Just kidding! They continue to fuck!

At around this time, Victoria’s mother, goes to the mother nun to talk about the spell that was used on Victoria. They briefly argue and sling insults around before they start making out and having sex. And guess what, Victoria’s mother has a penis as well. And so does the mother nun. The mother nun had a boob job and monstrous sized boobs and apparently used a spell to give herself a penis because she wants to find the ‘mother father’ whom she thinks is Victoria at the current time.

Later Victoria and Bambi started to talk to each other again, because sexual tension. Victoria thinks it was all a dream which would have been better than what has actually happened. Bambi decides it’s best to be in Victoria’s bed in scantily clothes and this becomes a new norm for them to have sex. The author has no idea how a clit works and Bambi’s clit keeps on growing to be a small size penis, and they use it for butt sex and it kept growing.

After this I decided to not go any further and proceed to the nearest brain bleach station. 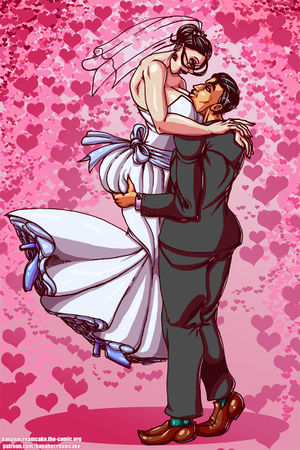 A rare, if not unique, picture in this webcomic which does NOT depict graphic sex. It's actually a shame the comments section underneath had to go ruin it with their discussion about it (we're not linking it but you're looking for page 510).

I do not know much about the author aside from the fact that they wrote this horrid thing. We think the text from the Patreon page from this comic says all we need to know about Transmorpher DDS though.

[Mario Bros] Princess Peach and Princess Rosalina are relaxing after a kart race in their jumpsuits. The mature Rosalina takes advantage of Peach's naivete to grope and toy with Peach.

[Street Fighter] R. Mika's partner, Nadeshiko, is revealed to be a futa, and she often can't fight because she gets too hard to perform. To deal with this, Mika helps her to relax before a match by thoroughly satifying Nadeshiko's futa cock.

[Mortal Kombat X] Futa Mileena captures her "sister", Kitana, and violently rapes her over a period of weeks, with the help of the horse-like Motaro, until Kitana ends up a completely mind-broken slave.

[Pokemon] Team Rocket steals a device that allows someone to transfer their mind into the body of a pokemon. Jessie makes James test it out, but rather than test it with one of his own pokemon he transfers his mind into Jessie's Arbok... however, she then unkowingly brings him along for some "special training".

[Shantae] Shantae secretly meets the pirate Risky Boots on a secluded island for a round of passionate, angry sex. However, neither of them realize Shantae's friend Sky is watching them the whole time...

[Fallout] A vault dweller gets out of Vault 34, but very quickly she comes in contact with radioactive material that causes her to mutate, growing larger and curvier, as well as growing a large futa cock. The rest of the short story would be quick vignettes showing the sexual adventures she has in the wastes.

[DC Comics] Catwoman finds herself living with Harley Quinn and Poison Ivy, though she's caught off guard when he finds the two of them in a lesbian relationship, which they quickly rope her into.

[various] Ivy from Soul Calibur teams up with Bayonetta in an attempt to defeat the mighty M. Bison. Their plan involves not simply defeating him in combat, but also draining his "essence" to steal away his Psycho Power.

[original] A ditzy blonde mother is tricked by her shota-looking son into having sex with him, by making her think it's all just a form of Sex Ed.

[Tarzan] A female version of Tarzan (Tarzana), meets Jane, and proceeds to explore her body

Then there's this from the $1000 tier. "With this much money coming in per month I can afford more than just living expenses, and can start to invest time and money toward selling print copies of the comic and appearing at conventions to help promote the series and meet fans."

Showing themselves in public after writing all that is audacious if nothing else. Prepare to weep for humanity when you find out they're at $703.55 a month at the time of writing this.

Since that above statement was written, as of the 13th of September (US East Coast time), there are currently 219 patrons contributing a net $1,223/month (up 11.55% from just the previous month) and there seems to be no end to its climb in revenue in sight. You're really not listening to a word we say, are you? Or even worse, you are and drawing completely the opposite conclusions to the one we're trying to make. I shudder at the thought that our work is if anything, is having the same results as the Streisand Effect, especially here.

Graph of number of patrons and revenue over time

Remember to click ALL to see the full representation of data available over time.

After reading about half way through this webcomic, I don’t ever want to see it again. I wish I have brain bleach right now. Look up this comic at your own risk.

Nope. Too gross, sorry. I’m being serious. It’s too gross. Google it yourself if my review made you want you to read it.