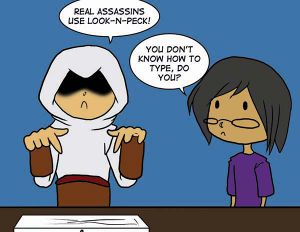 Ask Altair was in the to-be-reviewed section of the BWW forum. Easy to see why.

Not applicable, as it is a series of gags. 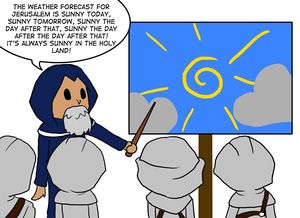 How the weather is in the actual Assassin's Creed game scenario, I take it.

Crude kiddie-level line drawings that were probably drawn on a tablet. No shading (except over the top of Altair's face), primitive colors, proportions are very bad and inconsistent. How inconsistent? Note that Kaxen has breasts in this strip but not in this one (or most others). Few strips have backgrounds, and those that do are badly drawn or copypasta.

Animations are also thrown in every once in a while.

The storyline is that a cartoon version of webcomic author "Kaxen" hosts several characters from the Assassin's Creed game franchise in her house, as well as some characters of her own. The Assassin's Creed characters cannot, or will not, leave her house (which must be huge since the city of Jerusalem fits inside of it). Why don't they leave? The author had actually created a contest where readers could pick their reason. The winning reason was that they can't get out of her room because there isn't anything to climb in it.

So what actually happens in this webcomic? Kaxen questions certain aspects of the Assassin's Creed games. She also keeps trying and failing to discover what Altair looks like beneath his hood (a running gag in the webcomic). She also sometimes pokes fun at the scenario of Assassin's Creed, and even unsuccessfully tries her hand at being an assassin herself.

Other running gags include Altair occasionally walloping Kaxen, Altair dealing with beggars, the differences between Altair's era (1191) and now, jokes based on the experiences of Assassin's Creed players, Altair and Desmond dealing with Kaxen's dog, eating spaghetti prepared by Kaxen's mother, assassins needing to know how to use bleach, and Altair having to deal with Kaxen's sister as well as her friends. A lot of the jokes are just plain random.

Needless to say, none of this is at all funny.

In the text beneath the strips, she drops bits of her biography, and even has put out pictures of herself in real life wearing a stupid Altair hood. So this webcomic is pretty much one obsessed fan's wish fulfillment.

Yes, as I said before, this is a niche webcomic for followers of the Assassin's Creed video game series, and not really intended for the general public. But other niche webcomics have been reviewed on the BWW because they're bad even by the standards of their targeted audience, examples including Bridgette's Belly and Raine Dog. Artwork, writing, characters, etc. should meet at least some minimal standards. But Ask Altair fails on all counts. The art is bad, the writing is bad, the characters are bad, and the jokes are random and weak and witless. Being completely unfamiliar with the Assassin's Creed games, I cannot judge how the people who are familiar with them would feel about all of this, but I cannot imagine them liking it either.

UPDATE: Smackjeeves has been shut down, and this webcomic got wiped out with it.

Just what the heck is "Assassin's Creed", anyway?