Anthropomorphic Animals and Their Use in Cartoons and Comics

In the context of cartoons, an anthropomorphic animal is known as a "funny animal". Funny animals are perhaps the most common type of character seen in cartoons, going back to the Golden Age of Animation, during the time of Bugs Bunny and Mickey Mouse. In this article, I will try to explain the purpose of such characters. I will be referring mostly to animated cartoons, but much of what I'm about to say applies to webcomics as well.

The thing that makes any cartoon work is simplicity. Characters and plots may be dynamic, but they must also be easy to understand, and that's why the art must be extra-expressive. The audience has to be able to tell what a character is thinking just from the look on their face, without having to know where they're from or how they got where they are. Making the characters animals is an easy way to achieve this because the audience knows what behaviors are typical of different animals. If they see a cat chasing a mouse, they'll understand why because they know that that's what cats do, and if they see a bear in the woods, they'll understand because that's where bears live.

So that's the first reason why many cartoon characters are anthropomorphic animals: it allows the cartoonist to convey what kind of personality or traits a character has by exploiting the stereotypes associated with certain animals. For example, a character who's a raccoon may be mischievous and sneaky, a fox may be sly and clever, a turtle may be slow-witted and cowardly, etc. It's important to establish a character's "type" in many cartoons because many cartoons tend to be of the "short" or "one-shot" variety, and as such, they don't allow much time for character development. The same is also true for many comic strips, whether they be newspaper funnies or gag-a-day webcomics.

Take Tom and Jerry for example. Tom is a cat and Jerry is a mouse, so their relationship should be obvious right off the bat: Tom chases Jerry, and Jerry evades Tom. This easy-to-understand relationship is important in a cartoon like Tom and Jerry. Back when it was new, before television, it was a series of theatrical shorts. It would have been difficult for a cartoon at that time to maintain any kind of continuous storyline because most people would only see it once every few weeks as a pre-feature when they would go to out to see a movie. There is literally no continuity between episodes of Tom and Jerry, as they would always be in a different setting, or even a different period of history in every episode, and the same is true for all of the old Looney Tunes and Disney shorts. Every short had to have a self-contained story that could be told in only seven minutes. Thus, the situations and characters presented within them were made to be obvious. You see Elmer Fudd walking through the woods with a shotgun, and you see Bugs Bunny, and you instantly know what the plot's going to be. You see a knight in plate armor riding a horse through the gate of a castle, and you know what time period it takes place in.

In this image, Tom can be seen in three different environments. There was no continuity between episodes of Tom and Jerry. Tom and Jerry have to be easy characters to understand because little time was devoted to establishing the situation in every episode.

The same applies to comic strips. Many readers will start reading a webcomic or newspaper funny, not from the first strip, but maybe from the hundredth. That's why it's important for the characters' personalities to be apparent just from their appearance, and this is most easily accomplished through the use of funny animals. Garfield is a perfect example. He's a cat, and he's fat, lazy, and selfish. He lives with a dog named Odie, who's energetic, dopey, and annoying. A reader could tell this much about them just from their appearance, and so, a reader can easily understand the context of every gag. If Garfield was a rabbit and Odie was a turtle, a new reader wouldn't expect them to exhibit the traits that they do, and so, none of their gags would make any sense. A cartoonist should consider what kind of job an anthropomorphic bear would have, what kind of music an anthropomorphic bat would listen to, etc. A character's behavior should generally reflect their species.

However, there are exceptions. In SpongeBob SquarePants, SpongeBob obviously doesn't behave like a sponge does in real life. Neither does Squidward behave like an octopus, nor Mr. Krabs like a crab. However, it's their appearances that matter, and not so much their species. Squidward has a large, cephalopodian head to reflect his inflated ego, and a scrawny body to represent his meagerness; Mr. Krabs has gigantic claws to reflect his money-grubbing nature, and a pot belly to represent his greed; SpongeBob's shape, dress, and bug-eyed, buck-toothed face convey his obnoxiousness and lack of social grace (he's "square" as opposed to "cool"). That's what really matters in a cartoon character. Just about all cartoon characters are designed so that their personality is obvious just from their appearance, even the non-animal ones. School bully characters tend to have torn-up clothes and bad hygiene, and nerdy characters tend to have thick glasses and "dorky" clothes. It's just that it's easier to convey a character's traits by making them a certain species. By doing that, a cartoonist can establish a character's quirks and favorite foods and activities, as well as their personality. For example, a cat character probably sleeps a lot, eats fish, and is easily amused by yarn, or a dog character might enjoy chasing cars and chewing shoes.

On that note, the most common animals seen in cartoons are cats and dogs. There are two reasons for this: first, they are the animals a human audience is most familiar with, and second, they are so opposite in demeanor that it creates an interesting dynamic. Dog characters are typically spunky, fun-loving, dopey, etc., whereas cats are aloof, lazy, selfish, etc. This is greatly exemplified in the cartoon CatDog, a cartoon about a cat and a dog who are conjoined at the pelvis and often can't stand each other, creating comedic conflicts.

All of these are, of course, merely tropes, and tropes can be subverted. Although the use of animals is helpful to convey character traits as unsubtly as possible, it's not entirely necessary to do so. Some characters are designed to exhibit traits that are totally opposite of what one would expect. For example, a "sophisticated monkey" is quite common in many cartoons, including DreamWorks' Madagascar. This is typically done for the purpose of comedic irony. An audience expects a monkey to be loud, dirty, and to generally act uncivilized, so to make a monkey behave in the complete opposite manner actually works because it plays to the audience's sense of irony. They understand the joke. But if you were to make a character that doesn't behave in any way that's understandable for their species, it wouldn't work. For example, if you were to make a character who's an alligator that lives in a desert and has an obsession with peanut butter, it wouldn't make any sense, not even in an ironic or satirical way. It would be absurd, yes, but absurd doesn't always equal funny.

There's also characters like Droopy the dog, who isn't energetic or playful, but is instead depressive and soft-spoken, and Walt Disney himself deliberately avoided giving Mickey Mouse any traits typical of a mouse, such as a stereotypical taste for cheese.

That brings me to the second reason why animals are often used. Making a character an animal allows a cartoonist to be really creative with a character's design. In a world where every character is a different species, you can have elephants and giraffes live among mice and frogs. You can have characters of all shapes, sizes, and colors, and you can draw them however you want. It's the same reason why a cartoon might take place on an alien planet or in a world populated entirely by robots. It allows for a creative freedom that would be impossible if every character was the same species, but unlike an alien world, since audiences are familiar with animals, it isn't necessary to elaborate on a fictional mythology, culture, or history. The variety of character designs can be vast, and they can be put into any situation, as demonstrated in many of the old Disney and Looney Tunes shorts.

Animals can also be used for the purpose of allegory. Art Spiegelman's Maus: A Survivor's Tale is the story of Jewish mice living in 1940's Poland, which is being occupied by German cats. The allegory should be obvious. There's also the greedy pigs who rule the farm in George Orwell's Animal Farm, although that was originally a novel. In a world populated by animals, different species could have interesting relationships. How would talking pigs interact with talking cows? Would cats coexist peacefully with dogs? Would sheep be oppressed by wolves? The use of animals for allegory is effective because an audience understands animals. If Spiegelman made Maus a story about crabs and horses, it wouldn't make any sense.

Finally, if a story is meant to be highly emotional, a cast of animal characters may inspire more sympathy than a human cast. Human audiences tend to be more sympathetic towards animals than other people, particularly if they're cute or cuddly. This is called the "Bambi Effect," named for the Disney animated film Bambi, wherein the titular character, a baby deer named Bambi, experiences the death of his mother. The effect is utilized to a great extent in the movie Plague Dogs, where two dogs escape from an animal testing facility and are then hunted down.

However, it is possible to go too far with it, as seen in the webcomic Jack. As Lesbot explained in her article "The Cute And Cuddly Cast," when an audience sees a squishy cartoon animal, they will immediately assume the work they are featured in is meant to be humorous, and not some heavy-handed drama about the philosophy of death or whatever. Works like Maus and Plague Dogs get away with it because the characters, even though they're animals, don't look like they're taken from a Looney Tunes cartoon. The art style reflects the serious tone. But in a comic like Jack, the art style is reminiscent of Goofy and Donald Duck cartoons. It doesn't fit. 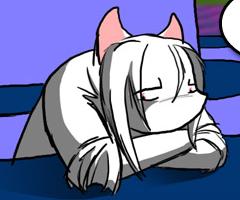 This is Artie from the webcomic Concession as he appeared in 2007. It's impossible to tell what species he is just by looking (he's actually a mouse). His design was improved later in the comic's run.

An example of a webcomic that fails to utilize any of the concepts I've mentioned is Concession. In it, characters come in a vast variety of species, including but not limited to wolves, cats, mice, and even pangolins. However, none of the characters really exhibit any traits typical of their species, and none of them even really look like their species. The mice are the same height as the wolves, they all have the same shaped head, etc. There really wasn't even a point in making them animals at all. The creator might as well have made them all humans, but he made them animals just to attract the furry fandom.