I first learned about this webcomic on the forums, and after reading it I can safely say it's a foul chimera of Natty and Assigned Male, but not as bad as either.

Luna's art has improved considerably over the years, but there's still a lot to be desired. Their poses come off looking stiff and squatty; they have a bad tendency to draw arms shorter than they should be, especially when they're at an angle. Bodies aren't drawn to scale with heads. Their facial expressions are bland and tend to look copy/pasted with little room for exaggeration, and when they ARE exaggerated it looks really off against the rigid posing and models. The way they color blush is so saturated that it makes it look like the character's face is burned and clashes pretty poorly with the muted colors they otherwise use. When there is shading, it's done by going straight down in value on the color wheel and ends up creating a muddled, grayed out look. 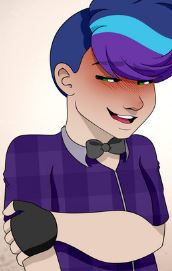 Basically all the art. 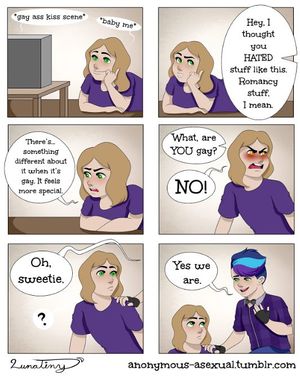 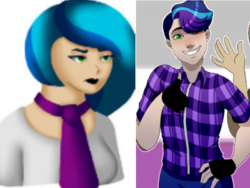 The main character and self-insert, Luna, is a teenager with toothpaste hair and a fiery anger for people they disagree with. In most strips they get red in the face when someone says something as trivial as "How dare you ignore my critique of your art!", "That doesn't make sense..." to gay men using slurs that they've reclaimed for themselves, policing them on what they can/cannot reclaim despite not being a gay man themself "OK, y'know what? I don't care if you're gay, that word is NOT a joke!" The comic falls into the unfortunate rut that most tumblr discourse comics fall into, presenting Luna as the "always right" authority figure while the characters representing the 'opposite side' are made out to be angry, unintelligent babies. It inspires little to no actual discussion or critical thinking and mostly just panders to the fake woke mogai crowd.

Another character is the token minority, Cheppi, who is a Native American used for about three strips and then mostly forgotten. Once used to talk about a pipeline, quite disrespectfully I think.

In terms of comedy, the comic fails spectacularly. I'm not sure if it's supposed to be entirely comedic, but the strips that are intended that way fall flat. As a visual medium, the art should compliment the buildup, which in the case of AA, it doesn't. Strips that could've been somewhat entertaining end up reading through uncomfortably either by way of poor staging or expressions not being stretched enough.

I think the last detailed one is Syrasi, love interest of Luna and sometimes used as a background LGBT token.

Next are the straw men.

The straw men in this webcomic are proven to be nosy, whiny, insensitive and rude. All of the straw men, except for maybe one, is cis, white and straight, the unholy trinity. (Funny thing, sometimes they're more likable than Luna.)

Not much is known about Luna, but it's safe to guess they're much like their self-insert aka whiny, bitchy and prone to exploding. Two things that are known about them is that they don't think kinks are sexual and run a "sfw" vore blog. 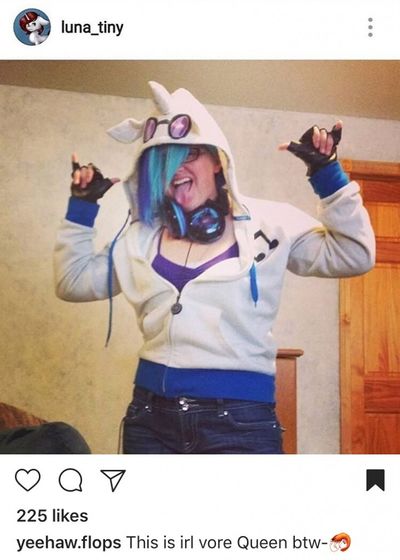 The "vore queen" in the flesh (weird flex, but okay)

That's right, Luna got in trouble for saying they don't like HRT because "Bad body odor, more body hair, the chance I'll get a sex drive- I just want muscle and a strong jawline." Obviously people were mad at them for posting this, so they deleted the comic. 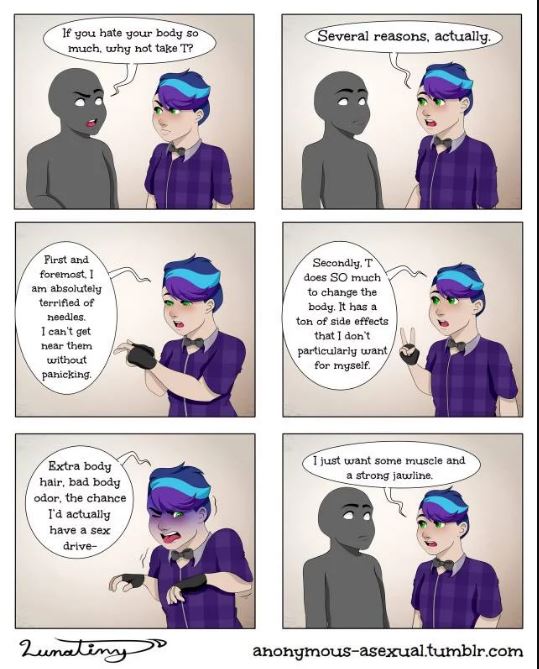 Honestly, I don't know what to think of this. Does she hate trans men, does she just hate men overall or both?

Luna's stiff art and anatomy, along with their poor color palette, clash hard with their poor writing and staging. They fall into the territory of using their comic to preach to the choir, rather than inspire actual critical thinking in the people they're arguing against. The use of straw men over actual arguments ends up making their claims seem less legitimate and makes her self insert pretty unlikable as a protagonist. The color palette needs to be improved, starting with using more vibrant colors and not shading with black, and they need to make improvements to the character anatomy (humans are not bobble heads.)