Somebody requested this on the forums, and I thought I'd try out my first review on something short. So here I go.

We've got yet another bad from day one webcomic here.

A gag a week webcomic that follows four characters, but with no overall storyline.

Fringy uses flat colors, and sets of three or six panels identical in size and shape, which obviously leads to a very plain boring layout. But that in itself would not kill a comedic strip. No, there are also his stiff poses, facial expressions that tend to look about the same, and the occasional use of blatantly obvious copypasta backgrounds. He draw flatscreen TVs and laptops with no depth at all. In one instance he tried doing a turning around while still sitting pose, but it just looked like an awkward mess. Somehow even doing just this, once per week has been a struggle for our poor Fringy. For in this webcomic's eight months of existence, he's already slipped his schedule three times (strips 14, 24 and 28), each time making a quickie bad filler strip, not that there's that much of a difference with his regular work. 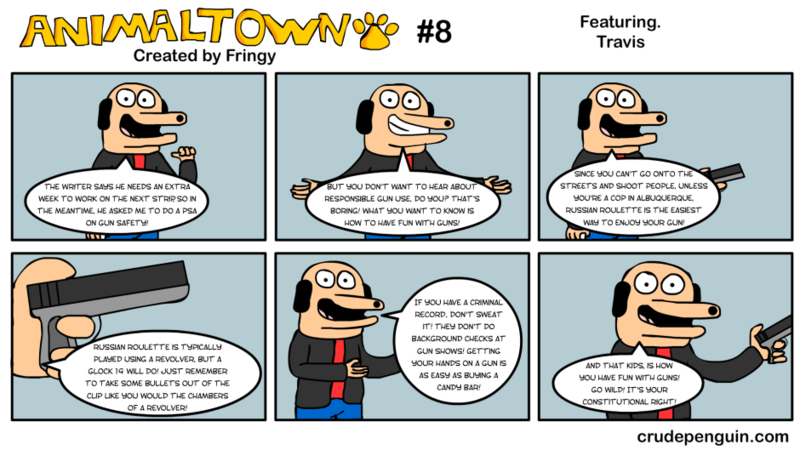 I guess he's still stiff from that plastic surgery.

On his "About" page, the author describes his work as (quote from site):

"crude and comics and animations, with an emphasis on brutal social commentary through heightened portrayals of harsh realities, from a jaded and cynical perspective, with an unapologetic style of delivery".

Oh, goody goody gumdrops, does this sound promising! I do love me some crass jokes on real life issues. Perhaps this webcomic will prove itself to be right up there with old favorites of mine like Duckman, Tripping the Rift, or In Living Color.

For one thing, there aren't many portrayals of harsh realities, heightened or otherwise, since the strips are all either too broad to be of any kind of interesting point, like Colin's boss acting like an arrogant jackass towards him. Or Travis wanting to help a cause only by tweeting about it. Or Colin getting pissed at the 2016 feminist Ghostbusters trailer. Yep, that dead horse is evidently this guy's idea of "social commentary". Though I guess I'll give him some credit for that computer getting brutally tossed around as the strip's "punchline". Other times the situations are just too fantastic, and unrelatable, like Travis randomly having some Yakuza connections who give him some things...for some reason. And the point of this particular strip was that some mailman not-so-subtly wanted his wife dead..... 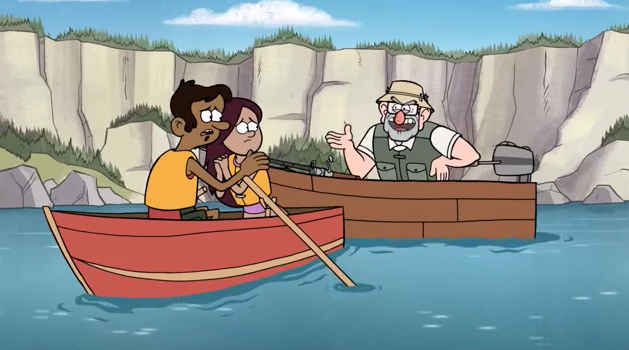 "It's funny because marriage is terrible!"

And that brings me to another point, that the so-called punchlines in these strips are simply crass for the sake of being crass:

Strip #16: Bruce observes that Mike's recently arrived package is long and certainly not a DVD. It's funny because...um...dildos?

Strip #19: Colin gets urine on his shoes. It's funny because...potty humor!

Strip #31: Bruce picks up a cinder block to throw at some protestors that he's annoyed at. It's funny because...it's violent, disproportionate retribution!

The characters so far are all pretty flat and boring, with only two of them having any discernable personality. Apparently, the author is so clueless as to who his cast members even are, that he leaves the "Characters" section on his website devoid of any descriptions at all. The fact that he feels the need to list which characters are used at the top of each strip is disconcerting as well. But anyway, the cast consist of:

Colin Matheson, a perpetually angry gray cat slaving away at some nondescript office job. His disposition however, is more likely fueled by the god awful fuck heads he's surrounded by.

Travis Jefferies, a perpetually happy dog who provides most of the "comedy" in this series in the form of sheer idiotic antics, that are likely a weak emulation of the likes of Peter Griffin. Not much else to say except he drinks and smokes pot.

Bruce Tanner, a Gamma radiation scientist who, when angered, transforms into- oh wait, Bruce TANNER, not Bruce Banner. God I wonder if that was intentional? Anyway, not much to say about Bruce. He sometimes gets into antics, but is more grumpy or smug about things.

Mike Hayes, a green bird with the least personality of the main four. I really can't think of anything to describe his character.

And then there were four other characters listed as "Supporting Characters" despite the fact that they only appeared once. These include Devin Peters, a white duck, Harriet Ward, a fox and the only woman who's appeared yet, Phil Kraus, an alligator, or maybe a dinosaur? And Kai Ling....some white....lizard...thing with a mustache. I think he's Asian, maybe? Is there some greater plan for this series in which these other four will take part in? Only time will tell, but I can't give half a shit about them as it is.

A cast thats so boring and useless, that the author must remind of their names on every strip!

A self-proclaimed "Angry Australian", Fringy has a YouTube channel featuring his screaming rants about videogames and SJW's, in an annoying voice that I couldn't stand to listen to for very long. He also has another webcomic, Unsafe Space, which he uses to attack SJWs with, using pretty much the same art and humor style, but with humans instead of furries. He has also come up with yet another webcomic, Routine Contempt, less political but equally wretched. He's also made a few animations, and sketches, humor and art-all of it terrible.

An ideal establishment to patronize after viewing Fringy's works. 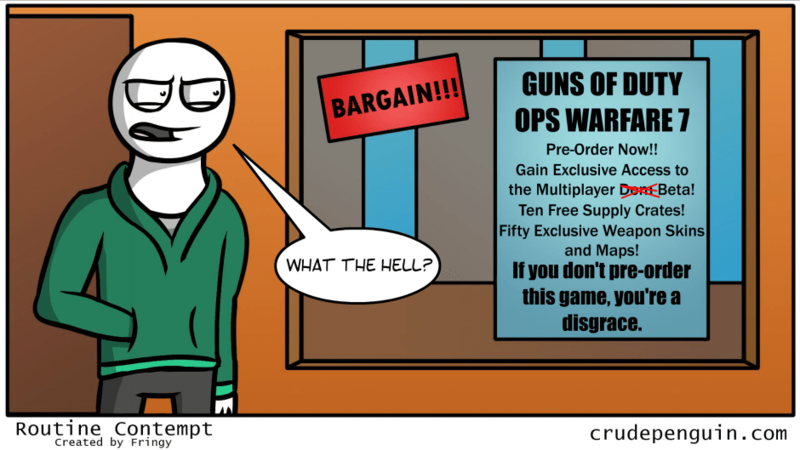 Fringy, you can attempt to do a thousand webcomics, but at the rate you're going, your thousandth attempt will suck as horribly as the first.

Note to Fringy: You can change your webcomic titles and change your characters as many times as you like, but change =/= improvement. Either improve your craftsmanship or forget about doing webcomics, for yours and everybody else's sake.

Subpar, immature humor that would scarcely delight anyone outside of Middle School, bogged down further by lousy, equally juvenile-looking art. While he may have some talent for YouTube rants, this person has no business making comics whatsoever, and I would recommend he cease this particular endeavor. Granted, it's just the first 31 comics in this series. Maybe in time Fringy's skills will grow, and break out of the dismal coccoon he's in now. One day he just might spread his beautiful butterfly wings and sparkle us all with his inspirational wit and artistry all over the internet. But I doubt it. I disliked GamerGate Life during its first 31 installments, and that one hasn't improved.

UPDATE: This webcomic and Unsafe Space are both gone, but Routine Contempt is still up.

SECOND UPDATE: Routine Contempt is now gone as well, and his "crudepenguin.com" website is up for grabs.