This webcomic is featured on the TV Tropes list of horrible webcomics. Taking one glimpse at it is enough to see why.
(NOTE: Not to be confused with Monster Lover by Dumok, a different webcomic that goes by the same name; which we also reviewed and which the TV Tropes article also references.)

The cover is already ugly enough to look at, but the art somehow manages to get worse on the first page.

The story starts with a mad scientist called Albert looking at a kawaii monster girl he has the hots for in his laptop, wishing she was real. The next day he calls for his assistant Karin, then proceeds to assault her and force her into a machine that turns her into that same monster girl overnight. No, this isn't a horror story, because she pretty much immediately likes her new look(?!).

Anyway, this other guy, Yuu, walks in and they talk about what just happened I think. They all go to a comic book store and all the nerds there get boners for the girl. This (maybe) upsets her and Albert, so they decide to go to his home. So, of course, the logical reaction to all of this is to make out, get naked and have sex, because that totally doesn't come out of left field or anything. The story ended there, and I was left wondering what the fuck I had just read. 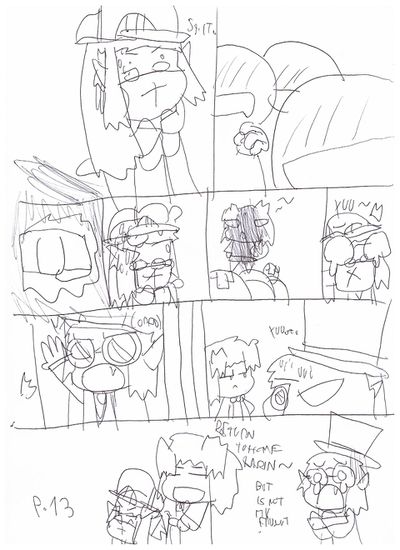 Just... look at it. That image right there - it perfectly sums up how the art fails at absolutely everything! It could almost be confused for an abstract masterpiece, that's how awful it is!

For the art, Alberto limited himself to using a single tool. Everything from the characters and objects to the panels and text − it's all drawn with the same pencil over the same sheets of stained paper, and it leads to the end result mushing into a downright incomprehensible mess. The problem is that none of those elements are any good individually. The anime style has been done to death, the panels don't ammount to more than crooked lines (ever heard of a ruler?), the handwritten text gives eyestrain when trying to read it, facial expressions look very flat, and the linework is overall very sketchy and plain-looking; not to mention the constant scribbling over pages (ever heard of an eraser?) and the hilariously bad attempts at being sexy.

The story shows glimpses at what-could-have-been in the cover, which is the only part to feature color; and it looks slightly better than the rest. Don't get me wrong − the linework is just as atroucious and the coloring quite noticeably goes outside the lines, but at least its mere addition helps the reader distinguish what is meant to be what, besides making it look a bit less bland. I don't understand why he drops it after that, did all his crayons spontaneously combust after using them that one time?

Not only can the author not draw to save his life, but he doesn't seem to be much a writer either. The text is already hard enough to make up due to how abysmal the lettering is; but on closer inspection one can see that the dialogue is very awkward, and surprisingly rife with typos.

I guess I really shouldn't be critical of the characters or plot since it is meant to be smut; but when reading it I get the nagging feeling that the author was aiming for more. It's almost as if he's trying to flesh out his characters, only to anticlimatically throw all that development out the window to instead show them humping each other. All I remember about the main character Albert is his last name (Rinbovhair), the fact that he's an obvious self-insert, and the scene where he assaults his assistant Karin in order to mutilate her. Was I supposed to find him likeable after that? If not, then why is he rewarded with a girlfriend at the end? Karin herself gets no development as a scientist and, once she becomes a monster, just accepts it in the span of like five seconds. As for Yuu... nope. Not a single detail about him springs to mind.

This leads me to my other problem: the pacing. When making a story this short, every single panel counts. Yet a few scenes (like when the three of them go to a comic book store) just drag on for no reason. All this does is pad the story out, taking away valuable space that could've been used for... oh, I don't know; maybe developing the freaking characters a little more!?

All I could find out about Alberto is that he's Italian and in fact wasn't a toddler when he created this, as his DeviantArt reveals he was 21 at the time.

Despite only being 22 pages long, Monster Lover is just not worth your time. Even Alberto himself agrees with this sentiment, since he seems to have pretty much disowned it. However, what the author hasn't given up on his art, and I'm happy to report that there's still a little gleam of hope left.

Throughout the years after producing this, Albert has made efforts to improve, and they seem to have mostly paid off. Even the lineart-only drawings look quite good. And sure, there's still plenty of room for improvement; but after that eyesore, it's admirable to see he's still giving it his all. And Alberto, if by chance you happened to stumble onto this review, there's one more thing I'd like to say to you.