This was one was requested on the forums so I decided to check it out.

It was a mediocre comic at first, but when the artist jumped on the anime bandwagon, it lost lost something even more because of it.

Maybe it's the result of reading so many shitty webcomics that I couldn't help feeling apathetic and jaded while reading Aikida. It doesn't have the vileness of Eegra or Shredded Moose. It doesn't shamelessly rip-off stuff like No Need for Bushido or is pit of clichés that Zap! is. Even the stuff it's guilty of, like piling on the cheesecake while begging for your wallet, were even done "better" and more shamelessly by Exiern. In a way, I can't find myself totally despising this comic like many others I've reviewed, but that I feel more bored and frustrated with it.

I'll get to the basics, Aikida is the story of a red-headed, six-foot-tall half-Japanese girl (who looked Hispanic when I first saw her) named Aikida. It follows her adventures in college with her wacky roommate, the roommate's little sister, and the three guys that live across the street. While Aikida doesn't quite reach the levels of the dreaded uber-bitch (see Ina of No Need for Bushido or Mirru of Kitsune Jewel), I just don't find her very likable. She is rather grouchy, swears a lot at times, and is prone to punching guys for no reason (the guy she slept with) and her little sister out of resentment when they were kids. She even has a nerdy-looking boyfriend who she cheats on in a drunken one-night stand (the same guy she punches in the throat in a previous link), but it just made me more bored than angry with her. Even her dead brother, jealousy over no longer being the baby of the family, and her insecurities about her body (because she's sooooo tall and mixed race) still fail to impress.

While he does try to improve, the jump to a more anime style was not his best idea. It didn't change his anatomy problems (and the boobs still stick out) and the faces were poorly done. This is where I want to grab people by their shirts and scream: "Big-eyes-small-mouth does not equal talent!" If it's not done right you run into same face syndrome and poorly done, overdone yet overly simplistic expressions. And don't give me that it's the way the anime\manga style is supposed to be bullshit, because I present you this scene from the manga, Battle Royale. Not only can all forty students be told apart from each other, have lips and fairly defined noses, but there's real emotion in their faces with out resorting to single lines and watermelon-sized mouths with fangs. Of course the artist drew a revenge comic and rant about it. 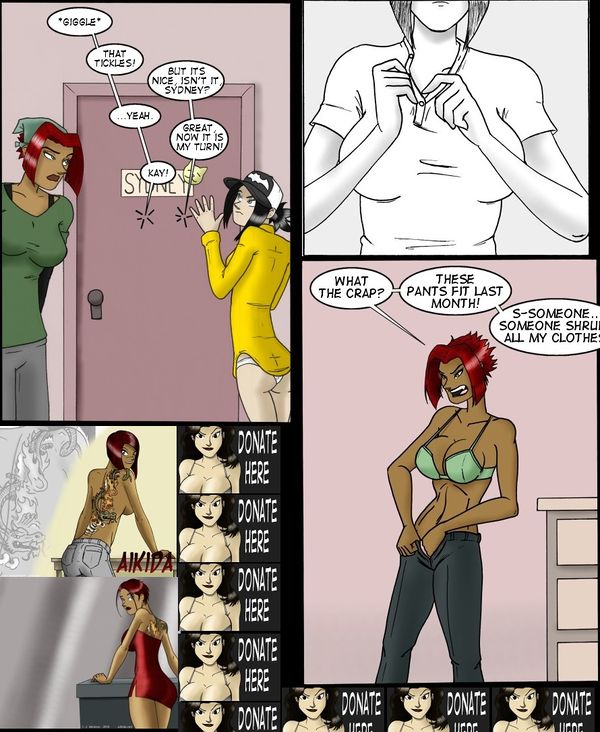 These are virtually from consecutive pages. Read it from the plot, eh?

The stories themselves are divided into two categories: drama and comedy. Putting the comedy strips in a black boarder is a good idea. While Aikida doesn't hit the levels of bad parodies and gamer jokes as God Mode, it's still not very good.

The first two storylines focus on minor things, like Aikida's first tattoo and the Halloween party, and neither one really develops the plot or characters (or their relationships) all that much. The Halloween one (which involves the previously mentioned drunken one-night stand) ends with Aikida waking up. There's no aftermath other than having her punch the guy and refuse to explain herself in the next storyline. Did he give her a VD or a pregnancy that she was forced to abort? Did she lose her boyfriend as a result? This would've been nice if it was brought up in previous storyline or at least in a future one; otherwise she just looks like a violent harpy. The final storyline before this comic went on hiatus focused on Aikida's past, her family problems, and her brother's death (though the last few comics refused to load). It was okay (as far as it had gotten), but was not very interesting nonetheless.

I should take one part of the opening paragraph back, since there are THREE categories. The third being cheesecake pin-ups of the girls (including the underage sister). While the art is a lot better than some stuff I've seen, the misshapen anatomy and his constant begging and whining for donations makes it even more unappealing. Not to mention the pics aren't appealing enough to begin with.

I can give Meinzer credit for sincerely wanting to expand his horizons and try new things, and I hope the suggestions in the art and writing review will hopefully help. It seems he was rather apprehensive when people didn't like the new style, and he has a habit of talking too much about stuff in his author's notes. Granted, I'm not interested in the same things as he is so that might be it.

Maybe I am jaded from all the worse stuff I've read, but it still doesn't give this comic a free pass. There could be a good comic, if the writer would stop with the parodies, go back to the old art style, and give the story and characters a little more padding.