This webcomic was mentioned on the BWW forums, and I ultimately decided to have a go at it.

Not applicable. The whole thing is a set of pages of bulletin boards of icons, upon which you click to get a message about said topic, examples being "SANTA ISN'T REAL?" and "If God were real he would prove it to me". Trouble is, the topics are not listed in any order, and you have to search through pages to find the one you want. The author could have at least provided some sort of index to make it easier to find the topic of interest to the reader.

As basic as you can get without resorting to stick figures. Simple line drawings, stiff and erratically proportioned, with little to no shading and only basic coloring. Not that this really matters because the pictures are only intended to illustrate whatever point the author is making. 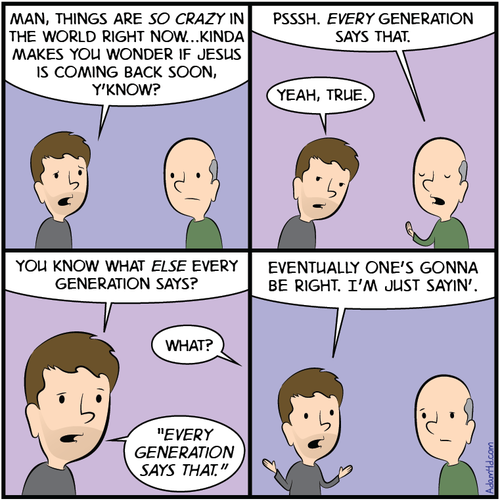 As I've pointed out, this webcomic is a big bulletin board of messages, mostly dealing with the author's views on Christianity. So...exactly what does the author have to say to us? Here is a cross-section of his messages:

Help! I'm Trapped In A Christian Marriage! Attacking the myth that a Christian marriage means that the wife must be submissive to her husband. The strip implies that the news media believes this to be the case.

Westboro Baptist Church Mainstream Christians do not consider them legitimate Christians, of course, but this strip could have elaborated more on the fact.

Get To Know Your Bible Translations A rare attempt at actual humor; the author describes how popular English translations of The Bible compare with one another.

John 3:16-18 American Popular Version How the much-referred to version of this Bible passage is taken out of context.

The Atheist Elephant Richard Dawkins is said to claim that atheism is not a religion. (It is, technically speaking, a religious belief.)

The Bible says we should only eat locusts The title is meant to be sarcastic; the point is to show how Biblical verses can be misinterpreted. (Actually, John The Baptist was considered in his time to be a weirdo-a pastor at my church said as much.)

Jesus never said anything about homosexuality The author makes the case otherwise.

Theology matters Why saying you love God without trying to find out how God is like makes no sense.

Just a good, human teacher The author makes the case that Jesus said things that a "good human teacher" would never say.

Pray for Obama Christians may rightly despise him, but the author argues against demonizing him.

The author does occasionally cover other topics such as parenting. But overall, the webcomic is intended for the author to tell the world his very strong views on Christianity and religion in general, what The Bible says, and who is or is not a Christian. His views are absolute and he allows no room for ambiguity or disagreement-it's his way or the highway.

The author's Patreon page, but now it says, “This patron isn’t supporting any creators at the moment.“ The page also had a brief biography of him but that is gone.

On the surface, this webcomic is essentially The Oatmeal with religious messages. Same bulletin boards of icons, same bad art, same asking for money. But though Adam Ford admits to making a living off of his webcomic, it would be wrong to compare him to a televangelist. His webcomic does not put out messages designed to please everybody, to make people feel good so they would gladly send him money.

No, Adam Ford does not merely expect his audience to pay for his webcomic, he expects his audience to accept everything he says without question. You disagree with him? Don't say anything to him, he's not interested.

UPDATE: His Patreon page as mentioned above isn't supporting any creators, so what is his income source now only God knows.

If that isn't enough to put you off, consider the design of his website. It is just a set of random listings of whatever topic he thinks of putting up whenever he feels like it, and as mentioned above, there is no index for finding whatever topic might be of interest to the viewer. It is like going through a heap of unorganized papers to find the one you're looking for. And visually, the website is just pages of banal pictures, upon which you click to get an equally banal depiction of the selected topic.

All this webcomic essentially does is soapbox. It won't provide comfort to the poor in spirit, nor does it provide charity to the needy. Christians should give this webcomic a miss and go to a real church instead.